Milwaukee on track for record breaking year, having already eclipsed all of 2020. 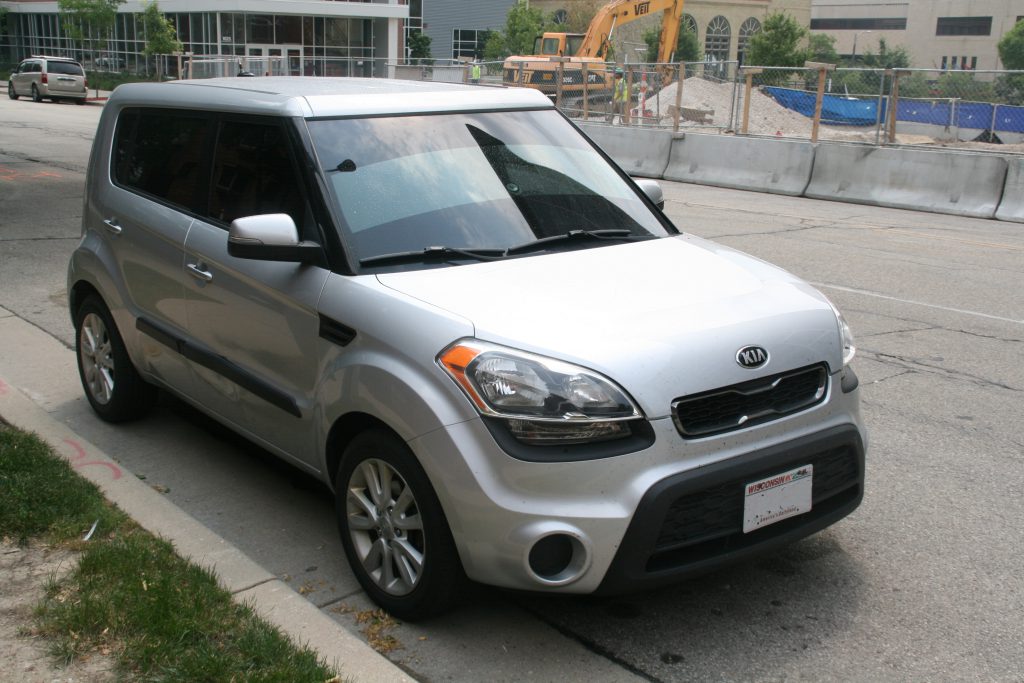 A Kia parked on a City of Milwaukee street. Photo by Jeramey Jannene.

Motor vehicle thefts are surging to a new record high in Milwaukee and two automakers find their vehicles specifically targeted.

The year-to-date theft total already eclipsed the total for all of 2020 when 4,524 vehicles were reported stolen. And it’s not like 2020 was a good year.

“We were already seeing an uptick and then things went through the roof,” said Milwaukee Police Department chief of staff Nick DeSiato to members of the Common Council’s Judiciary & Legislation Committee on Monday. The 2020 total eclipsed 2019 by 29%.

Vehicle thefts had been on a downward trend since 2015, mirroring a decrease in shootings and homicides. But like homicides, vehicle thefts are now trending towards record highs. A graph presented by DeSiato showed the prior high for auto thefts was in 2006 when nearly 8,500 vehicles were stolen. The city, at its current pace, is on track for up to 9,200 thefts, but the rate is still accelerating.

“Obviously, this is a very significant issue plaguing the city of Milwaukee,” said DeSiato.

Neither the MPD chief of staff, nor any of the council members, could offer an explicit theory on what happened but starting last fall thefts of Kia and Hyundai vehicles skyrocketed. Monthly Hyundai thefts jumped from 23 to 56 to 99 from September through November, Kia thefts from 16 to 21 to 110. All acknowledged that videos of how to steal the vehicles are circulating online.

In June, the last full month for which data is available, each manufacturer saw a record number of local thefts. Kia with 312 and Hyundai with 328.

Get a daily rundown of the top stories on Urban Milwaukee
The vehicles, Kias from 2011 on and Hyundais from 2015 on, have a series of flaws that make them more susceptible to theft.

Alderman Robert Bauman asked just how easy they were to steal.

“Oh simple. I could do it,” said Ald. Michael Murphy.

“I don’t want to give you a YouTube tutorial,” said DeSiato.

“I don’t know that it matters,” said Bauman. “I may be the only guy that doesn’t know.”

Rear windows in the vehicles can be broken as they are not connected to the alarm system. More sophisticated techniques involve prying out the window. Once inside the vehicle a panel can be removed and the vehicles started by using a USB cable. Others have used pliers.

“While we take no responsibility away from those that choose to commit crimes by stealing cars, we recognize that to really deal with this issue you have to hit it from a million different ways,” said Alderwoman Milele A. Coggs.

“It’s a multi-pronged attack. It’s coming at this from many different angles,” said Murphy.

The police department first made contact with Kia and Hyundai in May.

“At first they referenced… that they met the national standards,” said DeSiato.

Now the companies are providing steering wheel locks for MPD to freely distribute.

An initial batch of 2,000 was delivered and more promised. They are available at any police station 24 hours a day for the owners of the impacted vehicles.

Who is stealing the vehicles?

“It’s very, very hard for us to track the demographics of the suspects,” said DeSiato. “They are very difficult crimes for us to solve.”

Ald. Scott Spiker asked if the crimes were being committed by certain ages.

“We hear that a lot, that it’s young people that are doing this,” he said. “But I think it’s an older population.”

He said it’s difficult to connect all the data, including when or where cars are stolen. MPD often finds the abandoned vehicles before the owner knows it’s gone.

Milwaukee is not alone in seeing the Kia-and-Hyundai surge. The city’s Legislative Reference Bureau found that Denver is seeing a surge dating back to 2019. But specific data for other cities is hard to come by according to the LRB report.

A consumer-filed lawsuit is pending in Milwaukee County Circuit Court against the manufacturers. Bauman, Murphy and others pushed for the City Attorney to also engage on the issue.

“You have a classic case of global companies having very little concern about public safety in the city of Milwaukee unless it impacts their pocket book,” said Bauman.

“These are very serious issues,” said Murphy, ticking off a list of incidents where bystanders were killed or injured by those driving stolen cars.

More about the Kia and Hyundai Theft Epidemic