By Isiah Holmes, Wisconsin Examiner - Jul 23rd, 2021 03:20 pm
Get a daily rundown of the top stories on Urban Milwaukee 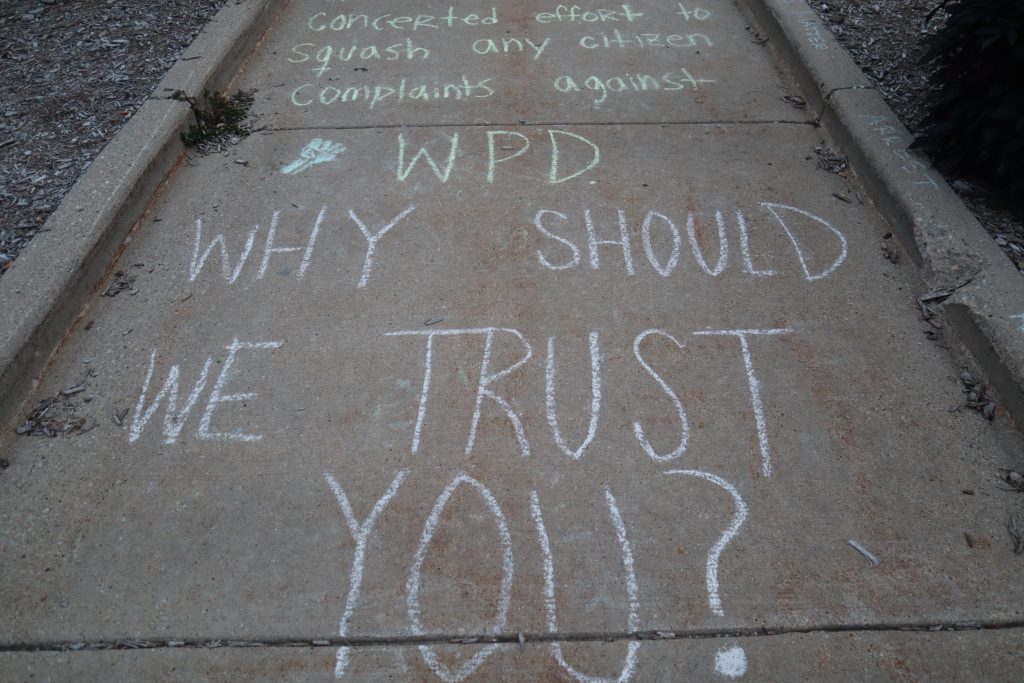 Protesters marked the ground outside the Wauwatosa City Hall with chalk displaying a variety of messages. Photo by Isiah Holmes)/Wisconsin Examiner.

Growing concerns over tactics used by the Wauwatosa Police Department (WPD) during the protests of 2020 have reached top officials in Wisconsin government. On Wednesday, Congresswoman Gwen Moore and Sen. Tammy Baldwin requested a civil rights probe of WPD. The pair’s concerns were outlined in a brief letter which was sent to Assistant Attorney General Kristen Clarke of the federal Department of Justice (DOJ).

Moore and Baldwin sent their request after receiving information from attorney Kimberley Motley, who has pushed several legal actions against the city of Wauwatosa since last year. Her letter to Baldwin and Moore summarized issues uncovered over the past several months.

“The request comes from three families who have each had a loved one shot and killed by a police officer at the department,” Baldwin and Moore wrote. “These Wisconsin families have put forward serious allegations of misconduct, including policing practices that allegedly targeted individuals because of their race and/or their engagement in activities protected by the First Amendment.”

That last bit is particularly timely, as more details recently emerged about a list the department maintained last year. Although originally called a “protester list” by the WPD crime analyst who created it, WPD has since walked back the label. WPD stated it is a list of suspects, victims, witnesses, or potential sources of information related to the protests. It documents the names and personal information of elected officials, activists from several Milwaukee and Wauwatosa groups, and even people who seldom attended the protests. It also includes this reporter, the only credentialed journalist known to be on the list. WPD shared the list with the Milwaukee Police Department, and the Federal Bureau of Investigations (FBI).

Motley’s letter highlights a variety of tactics the department used against protesters last year. As marches through Wauwatosa continued into August, the department began issuing hefty tickets to protesters, sometimes totaling more than $1,300. Whereas some were mailed to marchers who had been identified via video and social media, others were delivered personally by officers.

Open records requests released by the department in January also showed that some people who had never been ticketed or arrested were listed as “arrested” with booking numbers on various days. The “ghost arrests,” as they were sometimes called by marchers, raised concerns that people were being subjected to fraudulent arrest entries. WPD countered that the entries were the result of the software used to manage reports.

During the October curfew, WPD used some of its most heavy-handed tactics. During the second night of the curfew, the mother and sister of one of those killed by a Wauwatosa officer were arrested by members of WPD’s Special Operations Group (SOG) and a U.S. Marshals Task Force. Unbeknownst to elected officials including Baldwin, the Marshals had been deployed to Wauwatosa and Kenosha in a similar fashion as in Portland, Oregon earlier that year. Tracy Cole, was hospitalized for injuries sustained during her arrest. Her daughter, Taleavia, was taken into custody and her phone was confiscated by Wauwatosa officers.

SOG has several functions in WPD, including cell phone data extraction and analysis operations. Many phones were taken during the curfew, but few were held as long as Taleavia’s. Her phone was only returned after 20 days following court actions filed by Motley. Taleavia said her phone showed signs of tampering. The department stated that it didn’t analyze data on any of the seized phones.

Emails obtained through open records requests later showed that the phones were taken to WPD’s so-called nerd lab, or the computer forensics unit. The emails were sent between SOG detectives, who noted that Taleavia’s phone had been separated from a batch of others WPD intended to return. It remains unclear exactly what the department did to the phones which it stated were originally taken for “electronic evidence.”

Members of the SOG also created a “higher value target” list which included Wauwatosa Mayor Dennis McBride. That document, however, was later denounced by WPD and the detective had a written reprimand placed in his file after Wisconsin Examiner reported on its existence.

Baldwin’s office told Wisconsin Examiner that the allegations against WPD “deserve a thorough review by the Department of Justice” so that they can decide whether a civil rights investigation is warranted. Other concerns were also raised in Motley’s letter to the two members of Congress. These include another email in which a WPD detective and union president said the union’s attorney suggested price gouging for open records costs to keep information on officers from getting out.

Wauwatosa is an area haunted by a history of redlining, segregation, and housing covenants prohibiting the sale of individual homes to Black residents. Wauwatosa, a town of 49,000, has a Black population of less than 6%. However, Motley’s letter noted, in 2018 African Americans were over 82% of WPD’s arrests, and 60% of traffic stops between 2015 and 2017.

Moore, who was recently chosen for a new select committee on redlining and racial disparities, explained why she feels a civil rights probe is important. “The federal government has an affirmative role in ensuring our nation’s citizens are safe from police misconduct and abuse,” Moore told Wisconsin Examiner. “That’s why I joined Senator Baldwin in asking the Department of Justice to consider the request from residents regarding multiple alarming allegations about misconduct by the Wauwatosa Police Department. Those allegations deserve a thorough review.”

Another elected official with growing concerns about WPD is state Sen. Lena Taylor, whose district includes parts of Wauwatosa. Taylor had particular concerns about the implications of the protester list. “The only way that we can know what’s going on — very candidly — is for there to be individuals who are engaged in the media being there,” she said. “And I’ve participated in protests and going and being a part, so that you can preserve the right of people to be able to dissent in America. That’s what makes us America.” She called the list, “somewhat disturbing,” but says she is is encouraged by the tone of WPD’s new police chief.

The new chief, James MacGillis starts on Monday. He is well aware of community concerns around how the WPD was gathering and sharing intelligence reports about protesters last year. MacGillis aims to focus on repairing the department’s relationship with the community. His approach and his tone are a far cry from MacGillis’ predecessor Barry Weber, who was chief for over 30 years and ended his time in the job targeting protests and their supporters.

Taylor said of MacGillis’ statements, “It’s a mindset that wants to promote creating something different.” Nevertheless, she added,  “talk is cheap. So we have to wait and see. …But I have to say I think hearing leadership that speaks of wanting to grow to be something different, I think that’s a good thing.”

Baldwin and Moore call for civil rights probe of Wauwatosa PD was originally published by the Wisconsin Examiner.