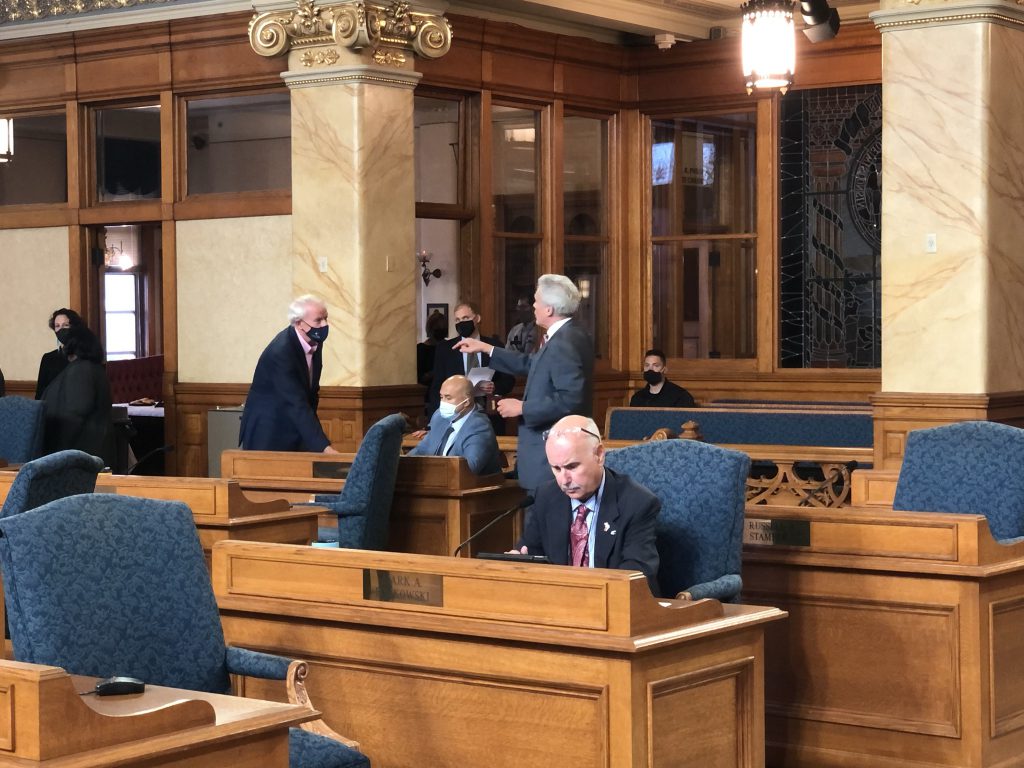 A fight between the Common Council and City Attorney Tearman Spencer is now a three-way fight involving Mayor Tom Barrett.

The council appears to be winning. On Wednesday morning, the council unanimously stripped Spencer of the unilateral ability to halt contract approval and overrode a Barrett veto of the proposal.

Spencer, in March, refused to sign a revised development agreement for the $190 million apartment tower, The Couture, and accused Alderman Robert Bauman of an ethics violation for introducing a unanimously adopted amendment that required a developer contribution to an anti-displacement fund.

The city attorney’s refusal to sign the agreement halted the project and amounted to an unreviewable veto.

A compromise on the specific matter was eventually reached, with the council hiring outside counsel and a third-party mediator to determine who acted appropriately. But the council is already moving to close what it perceives as a loophole.

In late June the council unanimously approved an ordinance change that would strip a mandatory review by the city attorney’s office of all contracts involving $25,000 or more. The change makes the review required only at the request of the mayor or a council member.

But Barrett vetoed the change.

“The file, if it were enacted, exposes the City to significant liabilities and risks. Removing a required third party review for contracts approved by the council or any other city official is dangerous,” wrote Barrett. “The mandatory review has served our residents and taxpayers well for over 50 years and adds accountability and transparency into City government.”

Barrett made a rare appearance on the council floor before Wednesday’s meeting to encourage the council to sustain his veto and adopt a different amendment. It was the first council meeting fully in person since March 2020.

But his presence wasn’t well received. Twice Bauman raised his voice, yelling and pointing at Barrett while the mayor informally discussed the proposal with council members. Barrett is currently without a council liaison after Myra Edwards became chief of staff at the health department and had to stump for replacement legislation himself.

“To throw a wrench in the process this late in the game, I think the council deserves more courtesy than that,” said legislation sponsor Ald. Jose G. Perez once the meeting had started and Barrett left the room.

Bauman disagreed with Barrett’s argument and said the change provides review as requested.

“If the mayor is so concerned about contract review, he can direct his department heads to have everything reviewed before it comes to committee,” said Bauman. He said the current process results in the city attorney’s office getting to review a deal after it is approved.

The alderman, an attorney, said the new structure provides for one similar to a corporation where an attorney provides advice, not the final decision power.

“Approval is not required of the city attorney. He’s a lawyer, not a legislator,” said Bauman.

He noted that the law used for 50 years and which Barrett praised was never used by Spencer’s predecessor Grant Langley who served as city attorney for 36 years. The law, he charged, provides for “no review, no ability to override, no nothing” for the Common Council. “That’s not democracy.”

“I don’t think it was ever the intent to not have the city attorney review any of these contracts,” said Ald. Ashanti Hamilton. But he said the existing ordinance gave Spencer not just the ability to review contracts, but veto power over them.

But not anymore. The council voted unanimously to override Barrett’s veto and revise the law.

After the meeting, Perez said Barrett’s visit was the first time anyone from the mayor’s office had reached out to him on the issue following the June 24th veto. He said it was unlikely the council would adopt Barrett’s substitute, which would need to be introduced as stand-alone legislation.

In an email shortly after the veto was issued, Perez was already encouraging his colleagues to override the mayor and reminding them that the new legislation was made by compromise.

“The advice of the Office of the City Attorney is a valuable part of our legislative process. The ordinance as adopted respects this while increasing rather than decreasing transparency,” wrote Perez.