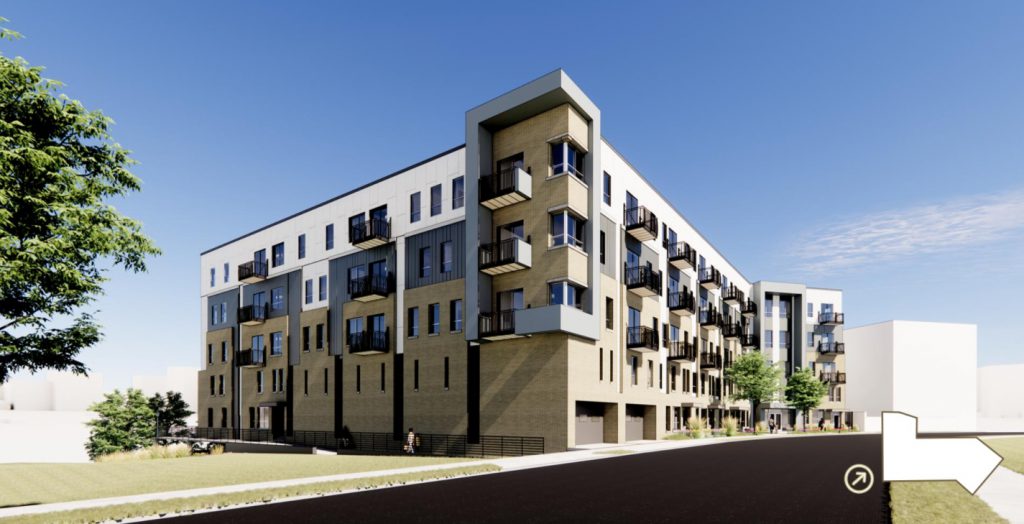 The developers behind two proposed Milwaukee apartment buildings are part of a group of seven Wisconsin affordable housing developers seeking federal funding to close a financing gap in their projects.

Wisconsin developers submitted $5.81 million in financing requests to the National Housing Trust Fund for its annual funding round. But the program, administered at the state level by the Wisconsin Housing and Economic Development Authority, has only $1.3 million to allocate.

“We’ve not seen this level of demand in past rounds,” said WHEDA CEO Joaquín Altoro in a statement announcing the applicants.

The funds support the creation of new, affordable housing units for individuals with very low incomes (below 30% of the area median income). They are often used by developers that serve individuals with special needs, which is the case for both Milwaukee projects.

A partnership of Movin’ Out and Rule Enterprises is seeking $1.15 million to support the development of EIGHTEEN87 on Water, a 79-unit apartment building proposed for 1887 N. Water St. Sixty units in the Lower East Side building would be set aside at below-market rates.

At a community meeting two weeks ago, a representative of the nonprofit Movin’ Out said it intends to set aside 16 units for people with disabilities as part of fulfilling its mission to provide quality, non-institutional housing for those with permanent disabilities.

Get a daily rundown of the top stories on Urban Milwaukee
The other Milwaukee project, Bethesda Cornerstone Village – Highland, is proposed by Bethesda Lutheran Communities for 3200 W. Highland Blvd. An existing building on the site would be demolished and a new five-story building constructed.

“Our proposal calls for 68 units, 62 of which would be affordable. Fourteen would be set aside for adults with intellectual or developmental disabilities, with the balance being for adults age 55 and above,” said Tom Campbell, the nonprofit’s vice president of real estate, in a January statement to Urban Milwaukee.

Bethesda is seeking $600,000 in financing support.

“The low-income units are typically integrated in projects with affordable workforce housing, making these projects essential in supporting employment growth. We will be evaluating the applications in the weeks ahead on a competitive basis to maximize the community impact,” said Altoro.

The other projects are scattered across the state, from Ashland along the coast of Lake Superior to another project from Rule and Movin’ Out in Madison.

All of the applicants have already received an allocation of federal or state low-income housing tax credits, the largest affordable housing financing tool in Wisconsin. Those credits require that specific units be set aside at below-market rates for individuals making no more than 60% of the area median income for a period of at least 30 years. The housing trust fund program supports lowering the income cap by offsetting the resulting reduction in rental income.

The funds, if received, take the form of low-cost, subordinated debt. The program is funded by a portion of a 0.042% fee on Fannie Mae and Freddie Mac loan guarantees and mortgage-backed security issuance. Wisconsin has awarded $11 million since the program’s first round of funding in 2016.

The national program is not to be confused with the Milwaukee Housing Trust Fund, a city program that could receive $35 million from the city’s $394 million, federal American Rescue Plan Act allocation.

You can read more about the EIGHTEEN87 on Water in a recent Eyes on Milwaukee column or about Bethesda’s project in a January Plats & Parcels column.