20 blocks of shopping, dining, arts galleries and theaters in a one-time swamp. 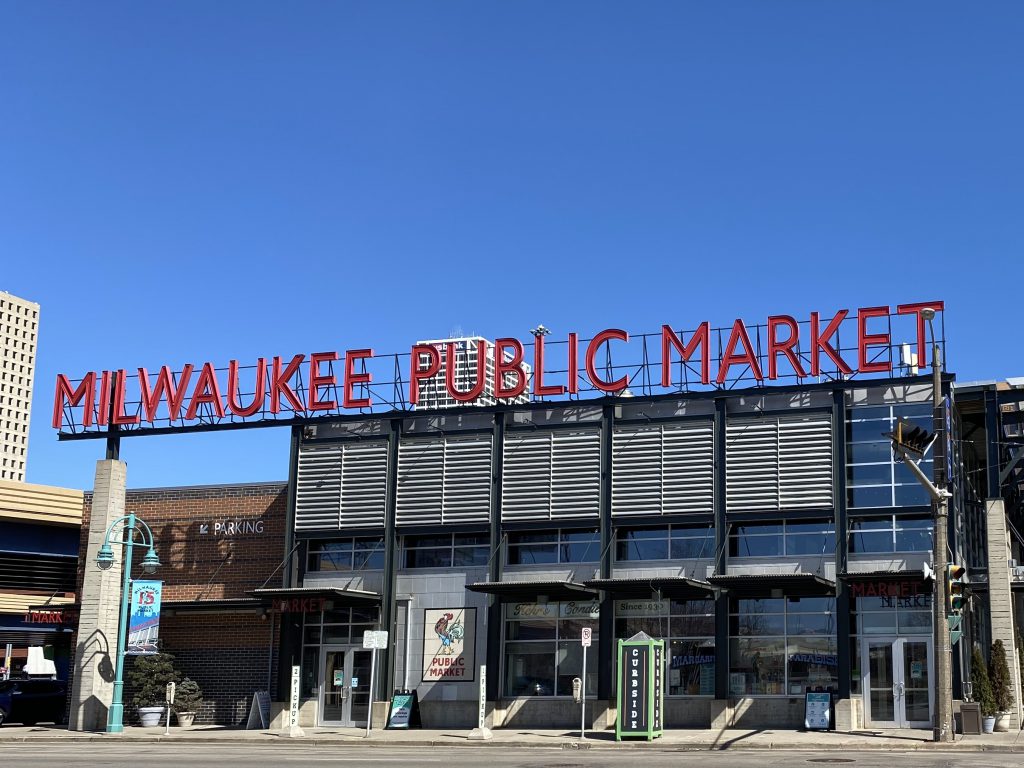 Start: At the corner of Water Street and St. Paul Avenue

Once a time, cattails, marsh grass, and wild rice flourished in the Third Ward. Beavers, butterflies, and diving beetles populated the marsh and Water Street was a swampy Indian trail alongside the Milwaukee River, a main thoroughfare then and now. In the early 1800s, there must have been some surprised buyers when they discovered the property they had purchased in the place we now call the Third Ward, was a swamp.

As Robert W. Wells wrote in This is Milwaukee, “Milwaukee had… a plentiful supply of Yankees who had a talent for selling real estate that was still covered by two feet of swamp water. It also had the advantage of a climate that could be depended upon to keep the marsh frozen for considerable part of the year. When the snow melted and the buyers discovered the land they’d purchased could be reached only by diving gear, it was too late to move Milwaukee to a better location, or higher ground. Instead, the high ground was moved into the swamp, filling up the great Milwaukee bog and bringing closer a day when it was possible to move freely through the downtown district without using the butterfly stroke.”

In 1836, Sylvester Pettibone brought eight oxen and a plow and started a landfill operation that transformed that boggy Indian Trail into Water Street. By 1855, small businesses lined Water Street from Juneau Avenue through the Third Ward, across the river and into Walker’s Point.

East of Water Street soon became a hive of small modest frame houses, most of them built by the Irish, the Third Ward’s first settlers, who had fled famine in their homeland. When Milwaukee incorporated in in 1846, the city was divided into five numbered wards, including what was formerly known as the Irish Ward.

By the 1880s, the Irish had gained some affluence and gradually began migrating to northern neighborhoods. When the 1892 fire broke out, those modest frame houses built by the Irish, 452 to be exact, provided tinder for that raging inferno.

After the Irish departed the ward, the Italians moved in, many of them from Sicily. Homes were cheap; the Italians were poor. Some went into the wholesale fruit and vegetable business and built warehouses to store their produce. Gradually, like the Irish, the Italians took their new wealth and moved north to the lower east side.

In 1976, a small group of business owners formed the Historic Third Ward Association. At the same time, Milwaukeeans discovered the value of their vintage buildings, especially the ones from the turn of the century.

One by one, warehouses and other buildings in the Third Ward were rehabbed, repurposed, and slowly the neighborhood took on its current metropolitan personality. Today it’s filled with condos instead of modest frame houses, restaurants instead of small manufacturers, and chic shops on Broadway, where fruit and vegetable deliveries once filled Commission Row.

Start this walk at Water and St. Paul at the Public Market, founded in 2005 on the site of the former Cross Keys Hotel. The hotel, built in 1853, when Water Street was still under construction, brought elegance to the neighborhood with its Italianate style and exterior balustrades. In the 100-plus years after the hotel was built, Water Street was raised five times while the hotel lobby sunk below street level, and why not, as the hotel and the street were built on top of a marsh.

The hotel was demolished in 1980 after its long reign as a dance bar and a drag bar where Liberace and Milton Berle once performed. The empty corner was repurposed as a parking lot until the Public Market took it over in 2005.

Walk south on Water to Buffalo where you’ll see the Marshall Building on the corner. Its boxy shape is typical of many warehouses built in the early 1900s. Its first tenant, Hoffman and Sons, were in the grocery business. Today it’s an incubator for small businesses whose owners want to combine contemporary amenities with vintage charm.

Continue south and turn left on Erie where you’ll come to the Milwaukee Institute of Art and Design, or MIAD, formerly the Layton School of Art. This small private college has a staff of 200 for approximately 700 students.

At St. Paul turn left and then left again on Broadway. At 345 Broadway, The Wicked Hop is a popular brunch site known for their outstanding Bloody Mary’s. The owners rehabbed a former warehouse, conveniently located adjacent to Milwaukee’s other hop, The Hop.

At 200 Broadway, Tre Rivali, a restaurant in the Kimpton Journeyman Hotel, has five dining rooms, a Mediterranean-inspired menu, and a fabulous rooftop deck. Across the street at Retique, they sell gently-used men and women’s fashions in a carefully curated Goodwill boutique. They specialize in trendy, like the rest of the ward.

At the south end of Broadway, you’ll see the Broadway Theater Center that houses the Skylight Music Theatre and the Milwaukee Chamber Theatre. There’s a 99-seat black box theater, and the main theater, an elegant replica of an 18th century European opera house.

Walk across Catalano Square, a small green oasis in the Ward.  Turn right on Erie, and right again on Water, to return to where you started. You have traveled through the heart of the Third Ward, past multiple shops and restaurants, and seen a small piece of a neighborhood that literally rose from the ashes of 1892. 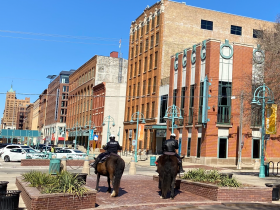 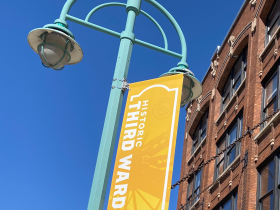 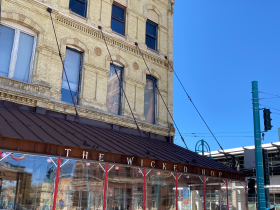 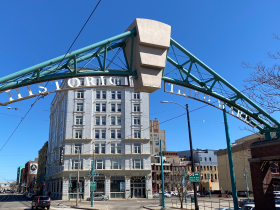 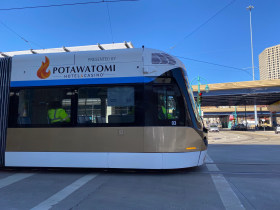 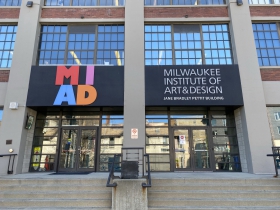