The Fight To Save Kohler-Andrae State Park

Herb Kohler’s golf course would grab a huge chunk of it. Environmentalists are fighting this. 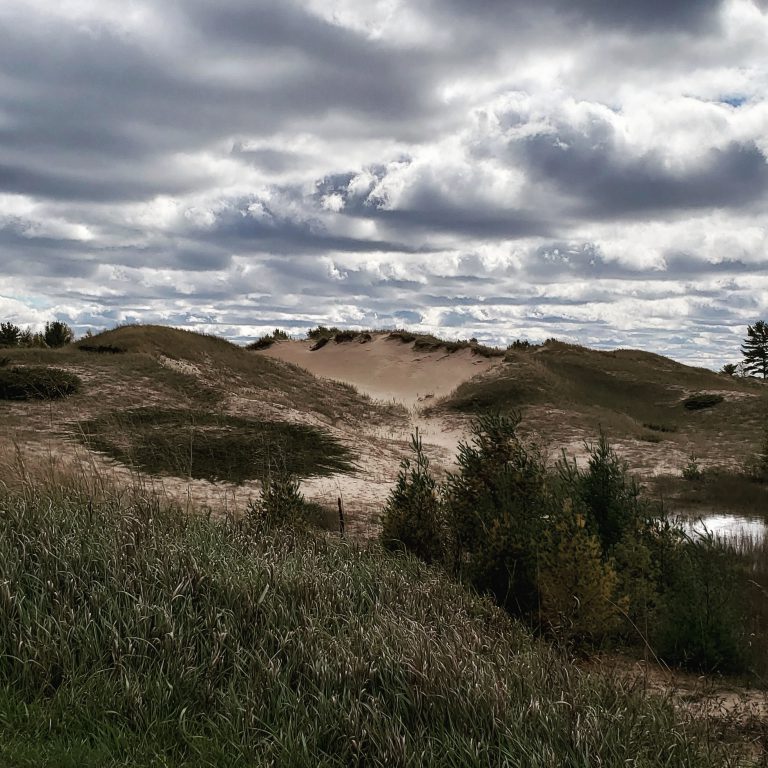 Last Saturday, Mary Faydash stood on her deck overlooking Lake Michigan with a microphone in her hand. The occasion was a rally for Sheboygan County’s Friends of the Black River Forest, the grassroots environmental group that she helped found. If it weren’t for FBRF, Herb Kohler, Jr.’s vanity project, a golf course parked on top of a rare wetland, with a 4-lane road through Kohler-Andrae State Park to take well-to-do golfers there, would already have been built.

The globally rare dunes would have been plowed under and covered with golf course sod and glyphosate; 75,000 birch, white pine, and Lake Michigan hardwood trees, the last remaining stand of old-growth forest on the Lake Michigan shoreline, would already have been clear-cut.

Among the attendees last Saturday was Sheboygan County supervisor Rebecca Clarke; UWM Lubar School of Management professor Belle Rose Ragins, a diversity specialist whose research on the discovery of ancient indigenous remains on the Kohler land led to a Wisconsin Watch article that received widespread attention; and poet Jane Tobin, who gave a reading and sold books at the rally to benefit the group.

It should have been a moment of triumph for the Friends. In late May, Sheboygan County Circuit Court judge Edward Stengel issued his 38-page decision – nearly two years in the making – upholding Administrative Law Judge Mark Kaiser’s 2019 ruling revoking Kohler Company’s wetland fill permit, without which the golf course cannot proceed.

In his decision, Judge Stengel wrote that the permit application approved by the Scott Walker–Cathy Stepp-era DNR was “not based on scientific facts and definitive plans, but speculation and promises.”

However, the Friends’ leadership, which includes perennial lead plaintiff Claudia Bricks and Jayne Zabrowski, the other founding members, is too savvy to believe that this will be the end of their struggle to save an ecosystem, a state park, and the aquifer from which they draw their water.

Kohler Company has proved far too litigious, and far too stubborn, in its belief that it has every right to override the objections of local property owners and park visitors. Kohler is the largest employer in Sheboygan County, with 5,000 workers in its factory, corporate headquarters, and design studios, as well as the four 36-hole golf courses it already operates there.

This has led to the sarcastic local saying, “What Herbie wants, Herbie gets.” Golf aficionado Herb Kohler, Jr. is the $7-billion company’s executive chairman. Kohler Co. is privately held, but his personal fortune, as former CEO and leader of the company, is estimated at $2 billion.

Kohler Jr. once told a TV interviewer that the Kohler land, 247 pristine (and rapidly eroding) acres north of the state park, “deserves” to be a golf course. You might say he’s besotted with golf. You might also say that he’s using it as a tax write-off. Though Kohler Co. doesn’t release its financials, its hospitality division, which includes Black Wolf Run and the American Club, is believed to be a money-loser.

Kohler VP of international golf Dirk Willis told the Sheboygan Plan Commission last December that the proposed golf course would bring “prestige” to Sheboygan County – in addition to the 16 golf courses already located there, including several championship courses – and that Kohler’s destructive golf course plan is “minimalist,” with more than 90% of the land being “preserved.”

Willis uses words like “minimalist” and “preserved” loosely. In fact, 50 percent of the wildlife at Kohler-Andrae Lakeshore – a single ecosystem that consists of both the state park and the Kohler land – would disappear as a direct result of this golf course being built. Faydash told the group assembled on her lawn on Saturday that the habitat of hundreds of species and a stopover site for 10,000 migrating birds would be reduced to that of a suburban subdivision.

Fortunately, more people are beginning to take notice of Kohler’s toxic and devastating plan. The Sierra Club-Wisconsin Chapter Lands Team recently launched a campaign calling for the preservation of the Kohler land and an end to the company’s predatory designs on Kohler-Andrae State Park, the 4th-most-visited park in the Wisconsin.

And the Friends of the Black River Forest are not giving up. Even in the face of a Kohler’s recent appeal to the Wisconsin Supreme Court, seeking to deny them standing in this matter – an appeal joined by AG Josh Kaul’s Department of Justice – they are marshalling their troops and planning future actions. Kohler will likely either appeal the recent Circuit Court decision, or the company will write a new wetland-fill application and wait for the next Republican administration to grant it.

The time to call for the preservation of Kohler-Andrae Lakeshore is right now. This is a battle whose echoes are already being heard far beyond Wisconsin. Preventing habitat destruction is as important to fighting climate change as reducing carbon emissions. And despite the companies glib promises, Kohler’s plan for its fifth elite golf course in Sheboygan County is as destructive as it gets.

RT Both is the political chair of Sierra Club-Great Waters Group, a member of the Wisconsin Chapter Lands Team, and the writer of the Wiscoland blog.

6 thoughts on “Op Ed: The Fight To Save Kohler-Andrae State Park”