The former president will speak virtually at Wisconsin event on Saturday.

By Rob Mentzer, Wisconsin Public Radio - Jun 11th, 2021 01:49 pm
Get a daily rundown of the top stories on Urban Milwaukee 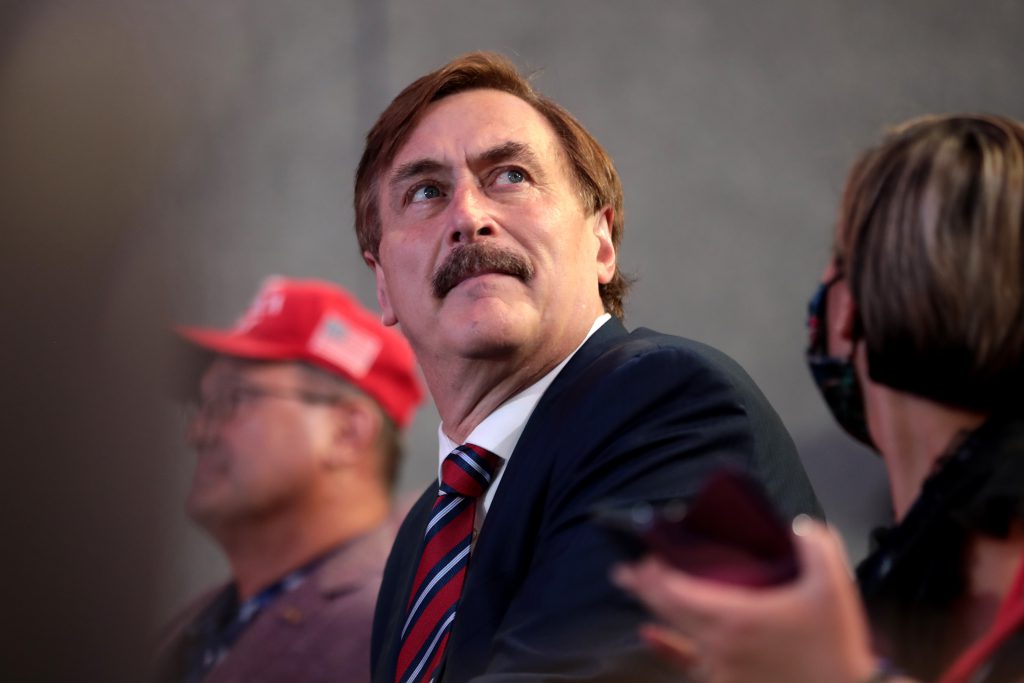 A rally in western Wisconsin on Saturday featuring former President Donald Trump will include speakers who have called for martial law and promoted a bizarre conspiracy theory based on the false claim that Trump can be reinstated as president.

The “MAGA Frank” rally in New Richmond is expected to draw thousands of Trump supporters. It features a number of fringe conservative figures and commentators, including many who are still calling for the 2020 election to be overturned. At its center is Mike Lindell, the CEO of MyPillow, who in January was photographed carrying notes to a White House meeting that suggested Trump should declare martial law to prevent then President-elect Joe Biden from taking office.

More recently, Lindell has said he believes Trump will be back in office by August. The New York Times reported this month that Trump himself has told people he believes this is possible. There is no constitutional mechanism for reinstating a defeated president before the next election, and numerous recounts and investigations have uncovered no evidence of widespread voter fraud in the 2020 election.

That won’t stop the speakers at Saturday’s Wisconsin rally from making wild, false claims, said Right Wisconsin editor James Wigderson, as they did at a similar event last month in South Dakota. Wigderson, a conservative who has become alienated from the Republican Party due to his strident rejection of Trump, says he sees little chance Wisconsin’s Republicans will condemn false or inflammatory statements made this weekend.

Wigderson said claims like those fueled the Jan. 6 insurrection at the U.S. Capitol.

“When you’re telling the Republican base that the election got stolen, and oh by the way, the next election is going to get stolen, too, you’re driving people to do terrible things,” Wigderson said.

Trump is on the bill for Saturday’s event, appearing via satellite. The former president has recently begun ramping up public appearances, at which he claims the 2020 election was stolen. At a recent rally he said the Republican Party would retake the White House “sooner than you think.”

Philip Chen, a political science professor at Beloit College, said the insurrection gives a darker cast to what might otherwise be understood as political maneuvering by a former president who intends to run for the office again. Politically, Chen said Trump is “freezing the field” of potential 2024 GOP candidates and maintaining his hold on the Republican Party.

One speaker at Saturday’s event, David Clarke, resigned as Milwaukee County sheriff in 2017 after four people died in one year at the Milwaukee County Jail, and investigations found a mentally ill inmate was not given water for seven days before he died of dehydration. Clarke in 2017 told a Wisconsin radio station he was accepting a position in the Trump administration, but never received an appointment. He was later fired as a Fox News commentator.

The event is happening in St. Croix County, where the county Republican Party urged supporters to “prepare for war” in an online post ahead of the Jan. 6 insurrection. The county Republican chair, John Kraft, resigned from his position after criticism of the post.

Chen said Trump is speaking to his most ardent supporters. But having lost his biggest megaphones — he’s been banned from social media accounts, and is out of power — he may have trouble making the same impact he once did.

“I think he’s searching for a way to have the same kind of audience that you had when he was president,” Chen said. “And I don’t know if there’s a way to find that, short of running for president again and being the nominee.”

Via Satellite, Trump Will Return To Wisconsin For Rally With Conspiracy Promoters was originally published by Wisconsin Public Radio.

One thought on “Election Conspiracy Promoter Hosting Trump Via Livestream”