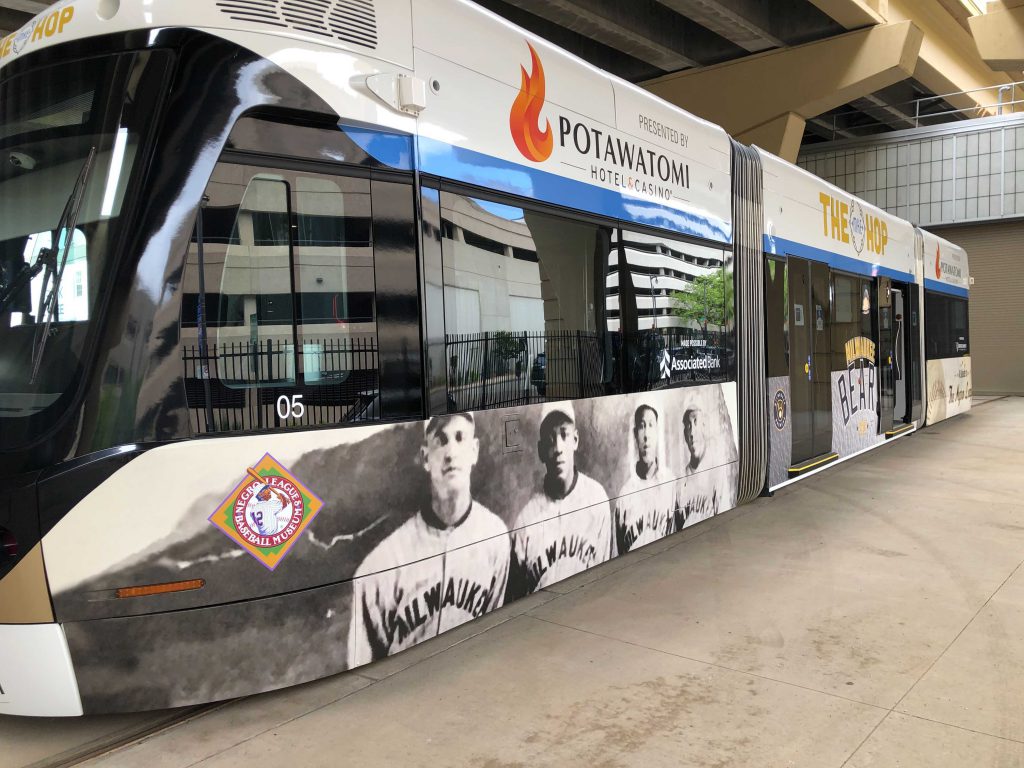 The Hop wrapped with images to honor the Milwaukee Bears. Photo by Jeramey Jannene.

The wrapped-vehicle honors the Milwaukee Bears, a Negro National League team that played in Milwaukee in 1923.

The sponsorship comes as part of the Negro Leagues Baseball Museum’s effort to celebrate the 101st anniversary of the former baseball leagues.

The Negro leagues were a series of different leagues for African Americans running from 1920 to 1948 during a period when professional baseball was racially segregated. The Negro National League operated from 1920 to 1931.

It’s not the first time the Brewers have honored the former team. In recent decades the team has annually worn special uniforms to honor the Bears.

Get a daily rundown of the top stories on Urban Milwaukee
The museum is located in Kansas City. A 100th-anniversary Negro Leagues vehicle was added to the KC Streetcar system in late 2020.

The branding will be left on the vehicle through the end of 2021.

The wrap is the ffifth branded streetcar The Hop has seen since opening in 2018. The Milwaukee Bucks sponsored a branded vehicle during the 2019 NBA playoffs, fiber internet service provider Everstream used a Holiday-themed streetcar wrap in late 2019 to highlight its entrance into the Milwaukee market, Milwaukee Downtown sponsored a “Comeback Cuisine” vehicle last summer and a Mask Up MKE streetcar was unveiled in August 2020 and is still in use. We Energies was expected to have a branded vehicle during the 2020 Democratic National Convention, but it was canceled as a result of the pandemic.

The Hop, which operates on a 2.1-mile-long route through the Westown, Historic Third Ward, East Town and Lower East Side neighborhood, is free to ride. An extension to the lakefront is expected to open in 2022.

If you want to hop aboard the special Hop vehicle, the easiest way to find it is to use the mobile application. The branded vehicle is numbered “Bus 5” in the system. Clicking on any of the vehicles on the route map in the smartphone app will display the vehicle number as well as its estimated arrival time at upcoming stations.