Memorial bench and plaque in Red Arrow Park to honor man killed by a police officer. 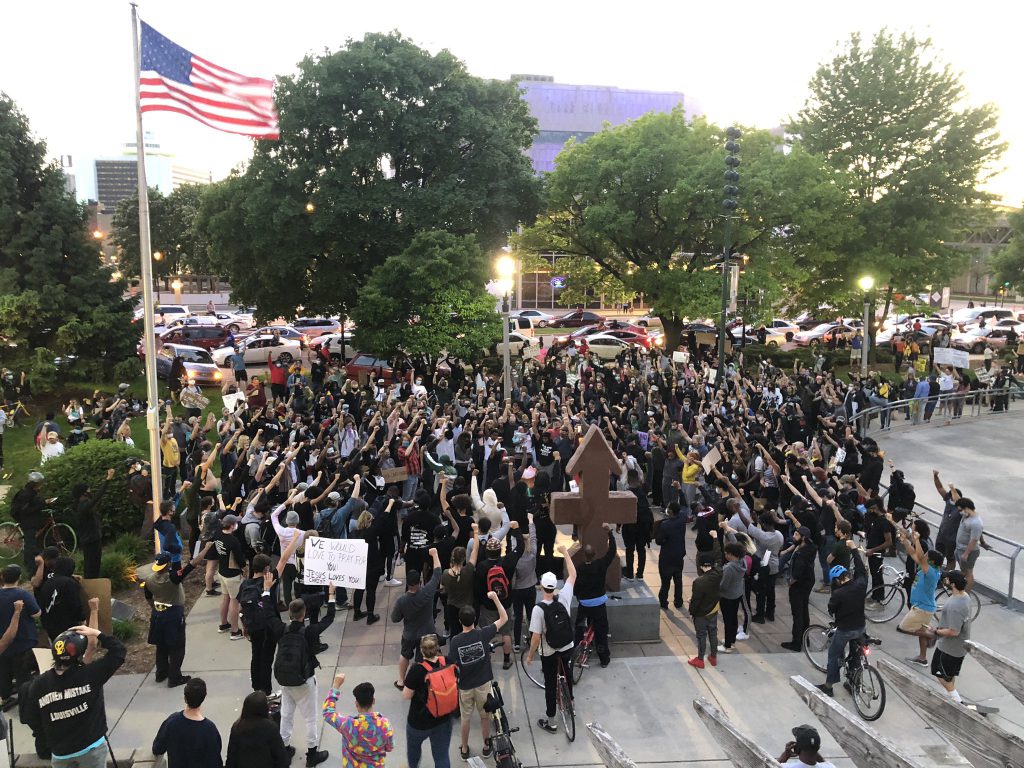 Protesters rally at Red Arrow Park on June 1st, 2020, where Dontre Hamilton was killed by a Milwaukee Police officer. Photo by Jeramey Jannene.

The Milwaukee County Board of Supervisors approved a memorial to Dontre Hamilton in Red Arrow Park Thursday.

Supervisor Sequanna Taylor authored a resolution that would use $3,000 to build and install a Dontre Hamilton memorial bench that will also be accompanied by a plaque.

Hamilton was shot and killed by a Milwaukee Police officer in the park in 2014. He was sleeping on a bench in the park when he was confronted by Milwaukee Police officer Christopher Manney. A physical struggle ensued, Manney started striking Hamilton with his baton, at some point Hamilton got a hold of it, then Manney shot him 14 times. After an internal investigation was completed, then-Police Chief Edward A. Flynn said Manney failed to follow proper police procedures and fired the officer.

Hamilton’s family were among the early leaders of Black Lives Matter protests in Milwaukee. Every year on April 30th, since 2015, there has been an annual gathering in the park to celebrate “Dontre Day.” The City of Milwaukee made the designation official in 2018 with a proclamation.

In a statement released by Taylor after her resolution passed, the supervisor said this: “The Dontre Hamilton Memorial bench will provide a space of healing for families who have lost loved ones to violence committed by those sworn to protect and serve and bring awareness to mental health issues in our community.”

During the board meeting, Taylor said the bench “isn’t justice for the family.” Rather, she said, it’s the county “honoring their word.”

In 2015, former county supervisor and current Alderman Khalif Rainey sponsored a resolution that created a task force to plan a memorial for Hamiliton in the park. The recommendation of the task force was a memorial bench.

In a statement released after the board’s approval of the memorial, Rainey said, “Dontre’s enormous impact on us has been palpable since his passing, and it is no surprise that after almost every incident of police violence or racial injustice, ‘Dontre Hamilton Park’ has been the epicenter for almost every rally or protest march through Milwaukee.”

When Taylor first announced her proposal for the memorial she released a statement with the Hamilton family. Dontre’s brother, Nate Hamilton, said, “It’s been seven years since the death of Dontre Hamilton, which feels like yesterday to our family. We’ve committed ourselves to justice not only for him, but all those who have fell victim to violence at th​e hands of those sworn to protect us. Continuing to empower community and inspire change is our goal.”

When the board considered the resolution funding the creation of the memorial, conflict flared between Board Chairwoman Marcelia Nicholson and Sup. John Weishan, Jr.

Weishan was the only supervisor to vote against the memorial. He argued that some veterans had approached him desiring input into the process for a memorial in the park, because Red Arrow Park is named for the 32nd Infantry Division of the U.S. Army. He said some veterans thought it was disrespectful to have a civilian memorial in the park. Weishan wanted the proposal referred back to committee.

During the debate, Chairwoman Nicholson said she supports veterans and has family members that have served in the military. She noted that the park was in her district and that she supports the proposal. “There’s one person against this and I think it’s a bad reason for being against this.”

Weishan took offense at Nicholson, saying she was implying there was “some mysterious reason that is transparent to everyone” for why he was seeking to refer the item back.

During debate, the chairwoman cut Weishan off while he was speaking, passed the gavel to Sup. Taylor, vice-chair of the board, and then moved to end debate on the issue. The supervisors voted against ending the debate, but ultimately, Weishan was the only vote against the memorial proposal.

The confrontation between Nicholson and Weishan was the latest in a building conflict between the two. In April, Nicholson removed Weishan as chair of the transportation committee.

One thought on “MKE County: Board Approves Dontre Hamilton Memorial”