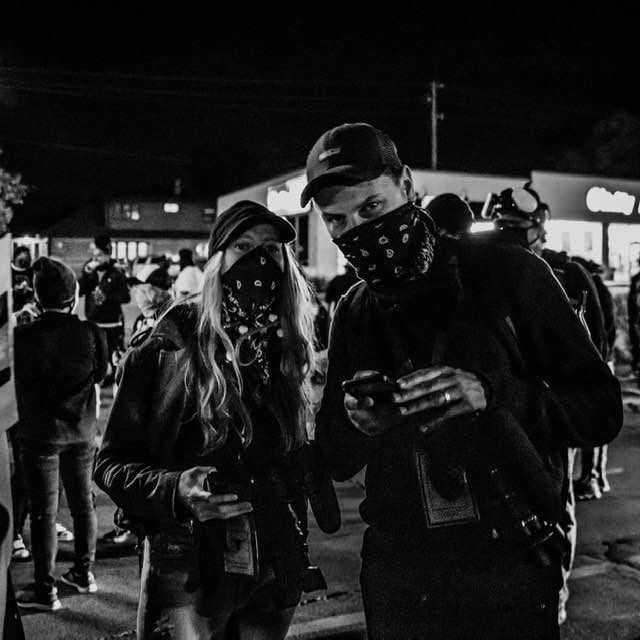 “I can’t breathe, can you breathe?”

The voice’s call, amplified by a bullhorn, is load enough to reach all the protesters, even those straggling towards the back. It’s rewarded with a resounding response of “I can’t breathe.” It’s a sound that has resonated at hundreds of marches throughout much of the past year — rallying protesters and punctuating their call for justice for the death of George Floyd.

Sean Kafer and Madeleine Schweitzer, a Milwaukee filmmaker duo, are no strangers to the sound — they’ve attended over 250 protests since May 25. In fact, their new film production company, Bullhorn Films, will act with a similar purpose to the company’s namesake — to elevate and amplify voices and stories from the Milwaukee communities most affected by societal divisions. 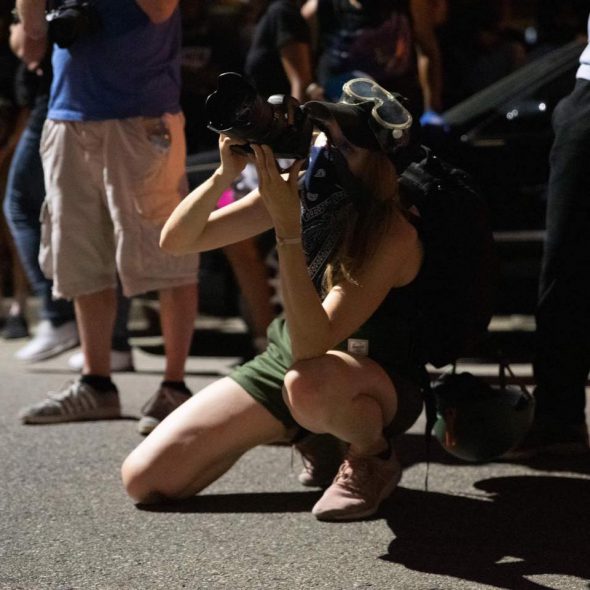 Bullhorn Films began as a two-person project between Kafer, a UW-Milwaukee Associate Lecturer and Project Director of docUWM, and Schweitzer, the Gallery Manager at the East Side’s Green Gallery located at 1500 N. Farwell Ave.

While attending protests, the partners quickly developed a friendship with some of the community leaders and organizers, who encouraged the couple to begin filming their experience.

“I just started filming (the protests), and it wasn’t until day 13 of the protests that we made ourselves a little more present and we talked to Khalil Coleman, who was running The People’s Revolution at the time, and he asked if we could keep filming,” Kafer says.

Since then, Bullhorn Films has produced over 30 short films, highlighting marches not only for Floyd, but for other people of color whose deaths at the hands of the police have received less national attention, such as Christopher Davis and Alvin Cole.

In one video titled “Germantown PD went crazy for what…?”, Bullhorn Films gives a perspective on an incident in Germantown that has been referred to by the media as “a disorderly conduct incident,” largely ignoring the fact that, as the video shows, Germantown police attempted to stop protesters and escalated the situation with spike strips and dogs, eventually leading to the seemingly random arrest of a black protester.

“The news reporting on that was off, and we wanted to show people that this is what really happened: this woman that got arrested didn’t do anything,” Schweitzer says. “We want to get the truth out there.”

Get a daily rundown of the top stories on Urban Milwaukee
At times, the Bullhorn Films crew have found themselves at the center of conflict and controversy. In August 2020, Kafer and another protester were struck by off-duty MPD officer Matthew Willmann during a protest. Police responded to the incident by holding both victims for five hours and issuing them $195 disorderly conduct tickets. Milwaukee Police Sgt. Michael Dix was on the scene, discrediting claims by the protesters and ultimately trying to sweep the incident under the rug. Although the disorderly conduct tickets have been dropped and Willmann has since been charged with battery and disorderly conduct, Dix has not been held accountable for his involvement in attempting to cover up the incident.

“His name should get out there,” Kafer says. “It was bad.”

The company doesn’t just focus its lens on situations like this. There are plenty of feel-good moments captured as well, moments where groups like DreamTeam United MKE and The Peoples Revolution host events that give back to the community.

“We try to really give back by providing these short videos online in a timely manner so that we’re not just hoarding all of these memories and things — we’re able to share these stories,” Schweitzer says. 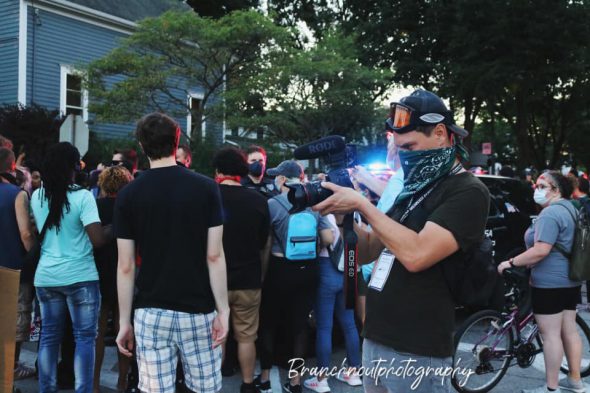 The short films also serve as a buffer for Bullhorn Films’ long-form projects that are currently in the works. Won’t Stop, which will likely be the company’s first release, is a full-length documentary following The People’s Revolution’s stride towards justice, beginning with the initial marches sparked by the death of Floyd and continuing into the Wauwatosa protests demanding the arrest of Joseph Mensah — the former Wauwatosa police officer who shot and killed three people over a six-year period.

“The concentration of our film will be on the origin of The People’s Revolution and the summer in Wauwatosa — what it was like to have them experience the kind of resistance they had in the suburbs,” Kafer says.

Bullhorn Films is also working on a screenplay based on Coleman’s Time & Place: The Life of B and K, a story following two teens attempting to discover their identities living in inner city Milwaukee. The movie will expand the 40-page book to a 90-page screenplay, and filming will begin sometime this year.

“We’re learning a lot about people that live in our own city that are doing these incredible things and people who have difficult pasts, yet still show up to stand up for other people,” Schweitzer says.

The workload that the team has taken on has inspired the duo to expand into a larger group — bringing on interns like UW-Oshkosh journalism student Brook Watts, who approached the friendly couple and eventually was brought on to help navigate marketing.

“The number (of people attending protests) started to dwindle and we started to really get to know each other as we formed into a sort of family community pod and learning about each other’s talents,” Schweitzer says.

Neither of the company’s two major projects currently have release dates. As one can imagine, telling the story of the fight for social equality in a segregated metro area like Milwaukee is complicated, so it’s never an easy decision on when to wrap it up. Even when news of Derek Chauvin’s conviction spread, word of the death of a 16-year-old girl shot by police in Columbus was a stark reminder that the fight isn’t over.

“I was out filming and everyone was excited and celebratory, and then one of the leaders said, ‘We just found out that a sixteen-year-old was killed,’ so that was a short-lived victory,” Schweitzer says. “And I wouldn’t even say victory — it was a win, but victory means so much more for everyone.”

And so Kafer, Schweitzer and the Bullhorn Films team will continue to march and document the stories that would otherwise go untold — the stories of communities coming together to stand up for one another.

“We’re trying to show that Milwaukee is not a place to be scared of,” Kafer says. “There are real people here with real hearts and some really beautiful people.”

Stay up to date with Bullhorn Films by following them on Facebook or by checking in on their website at www.bullhornfilms.com.