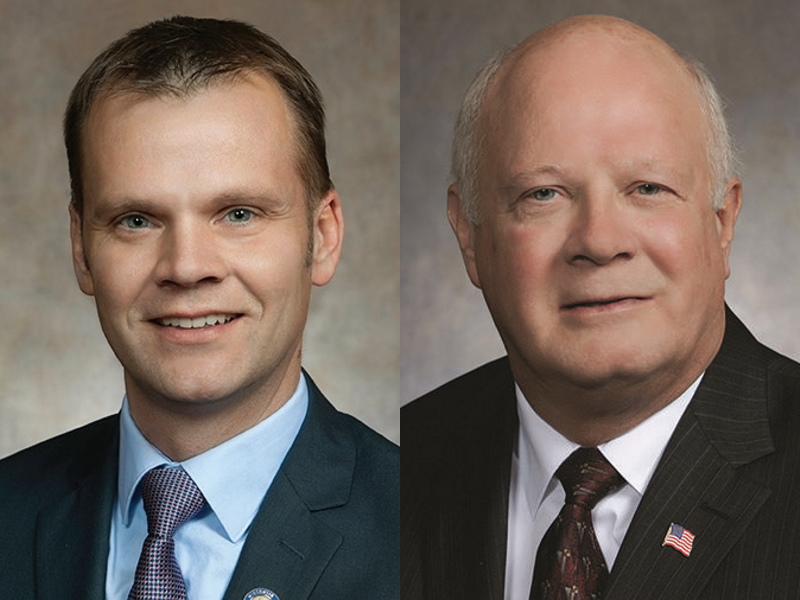 Devin and Dan LeMahieu. Photo from the State of Wisconsin.

“I was probably hooked [on politics] from that moment on,” Devin LeMahieu said in a December interview.

Devin LeMahieu followed a similar track to the Legislature: He returned to the Fox Valley to run his father’s publishing business, and also served on the Sheboygan County board, before his election in 2014 — the year his father’s name was no longer on the November ballot — to the State Senate.  “Maybe the apple doesn’t fall too far from the tree,” Devin LeMahieu noted in that December interview.

Sons, daughters and other relatives of Wisconsin legislators often follow them into the Legislature.

This session, another lawmaker — Democratic Rep. Greta Neubauer, of Racine — holds the  Assembly seat her father, Jeff Neubauer, held for eight years, from 1981 until 1988. Jeff Neubauer then served as state Democratic Party chairman from 1989 until 1993.

Greta Neubauer, 29, wasn’t born when her father was elected to the Assembly in November 1980.

Elected in a special election in January 2018, Greta is a member of the Legislature’s budget-writing Joint Finance Committee and its LGBT Caucus, an advocacy group that didn’t exist when her father served in the Assembly.

Get a daily rundown of the top stories on Urban Milwaukee
“My dad and I have a great relationship. But he learned a long time ago that, if he encourages me to do something, my first instinct is to do the opposite,” she said last week. “He was very supportive when I first ran and still is, and he does his best not to bring up politics at every family dinner.”

Another thing that has changed since Daniel LeMahieu and Jeff Neubauer served in the Assembly is the cost of campaigns. Daniel LeMahieu never raised more than $30,500 to get elected; Devin LeMahieu’s 2018 Senate re-election campaign raised $249,189, according to its Ethics Commission report.

Also, Jeff Neubauer served in the Assembly when his fellow Democrats controlled it. But Greta Neubauer serves in a Legislature that LeMahieu and other Republicans control.

The record for generational service in the Legislature is held by the family of former Democratic Sen. Fred A. Risser, of Madison, who was the oldest and longest-serving state lawmaker in the nation when he retired last year at age 93. Risser was elected to the Assembly in 1956, the Senate in 1962, and is the longest-serving Senate president, having held that office off and on over four decades.

Risser traces his family’s service in the Legislature to 1867, although he was the only Democrat. Risser’s great-grandfather, Col. Clement Warner, was a senator in 1867-’68 after serving as a Union Army officer in the Civil War. Risser’s grandfather, Ernest Warner, was a Republican lawmaker in 1905. His father, Fred E. Risser, was a Progressive Party member when he was a legislator from 1937-’48.

Mary Panzer was elected to the Assembly in 1980, the Senate in 1993, and was Senate majority leader when she lost in a 2004 Republican primary to now-Congressman Glenn Grothman. After that, Panzer worked as a lobbyist.

Her father, Frank, was a Progressive Party candidate when he was elected to the Assembly in 1930 and the Senate in 1934. After losing in 1938, he ran as a Republican and returned to the Senate in 1942, where he served until his death in 1969. Frank Panzer was Senate president pro tem from 1947 until 1965.

Republican Sen. Alan Lasee served in the Legislature for 36 years, including as Senate president, before retiring in 2010. His cousin, Frank Lasee, a 14-year Assembly veteran, then won that Senate seat.

But having a lawmaking relative doesn’t always get you elected.

Steven Walters has covered the Capitol since 1988. Contact him at stevenscotwalters@gmail.com.

One thought on “The State of Politics: Legislature Often a Family Affair”