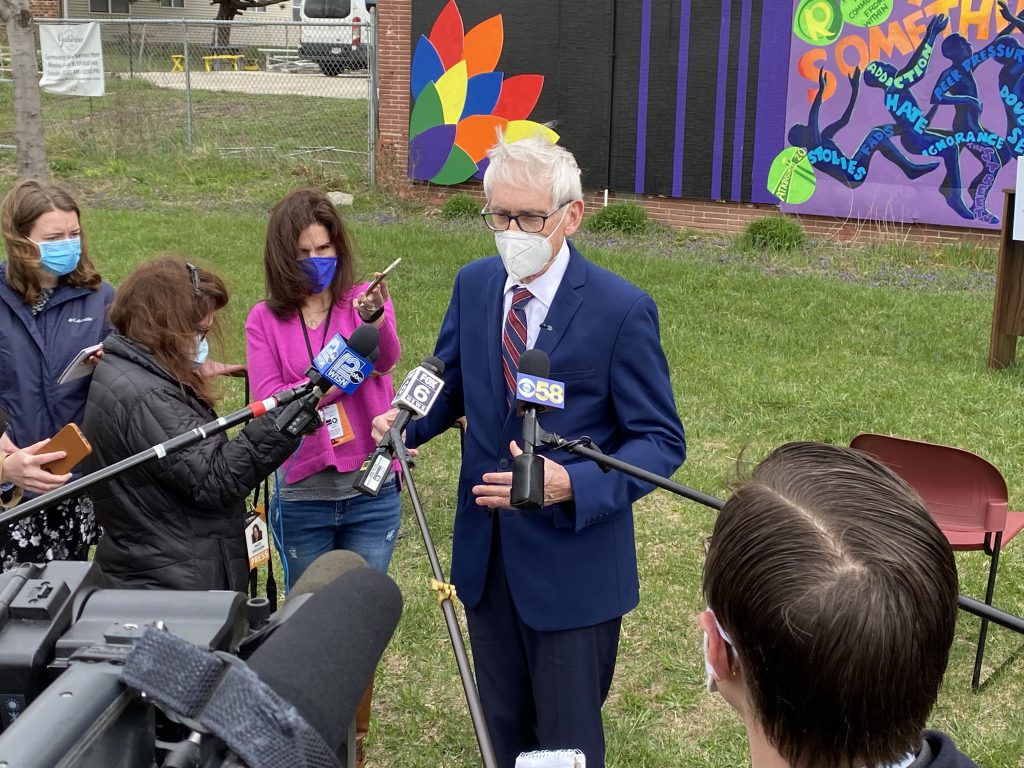 Governor Tony Evers visited Milwaukee Tuesday morning to promote a number of provisions in his biennial budget proposal that would change the way the state handles juvenile justice.

Evers held a press conference outside of the Running Rebels headquarters, 1300 W. Fond Du Lac Ave., a nonprofit that provides mentoring and programming to youth who have been involved in the juvenile justice system.

At the top of his remarks, Evers summarized the approach taken by his administration to reforming juvenile corrections. He said it’s important the system is “treating kids like kids and working to prevent them from getting involved in the justice system to begin with.” 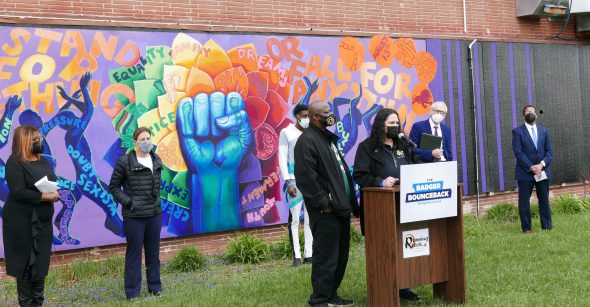 Victor and Dawn Barnett at the podium. Photo by Graham Kilmer.

Marlow, 21, has been with the Rebels since he was 10 years old. He credits the organization with changing his life, and he spoke at the press conference of the need to provide the support that will allow children to avoid incarceration. He said he wants everyone to have the opportunity to “turn their dreams into a reality.”

Dawn Barnett, who leads Running Rebels with her husband, said their organization provides “a different approach to keeping young people from going down deeper in the system.” She said they understand the importance of making juvenile justice into a “restorative system.”

“In the long run, if our goal is to have that young person transition to be healthy and connected adults, we have to do something different,” she said.

Providing support and a second chance for children who have become involved with the justice system is part of the ethos behind Running Rebels. It’s also steering the policies in the governor’s budget.

Evers’ budget has a number of provisions related to youth justice which include $9 million allocated for a grant program that counties can use to enhance community based treatment and alternatives to incarceration, $1 million in statewide training, raising the age of delinquency from 10 to 12, and changing the conditions for which someone under 18 is waived into adult court by returning all 17 year olds to juvenile court.

Evers said “It’s been years since the Legislature made promises with Act 185 to close Lincoln Hills and Copper Lake.”

Evers said he is still committed to moving children who are incarcerated closer to home, which was a major goal of Act 185, which provided funding for youth correctional facilities in 4 counties, including Milwaukee.

Milwaukee saw funding for its facility repeatedly slashed and eventually County Executive David Crowley deferred accepting the funds given the lack of capital funding and lack of clarity on sustainable funding being available to operate the facility. Eventually, the plans set out in Act 185 fell apart statewide as other counties declined to move forward with new faciltiies.

In the governor’s current budget proposal, he has allocated $45.8 million for the county’s planned juvenile justice center.

“Juvenile offenders are children,” Sen. Johnson said. “And with the right investments in our children, both before and after they offend, we can change the trajectory of our criminal justice system, just by investing in our youth.”

Get a daily rundown of the top stories on Urban Milwaukee
“The justice system in the 1990s and the early 2000’s did not get a lot of things right,” said Judge Childs. He said a lot of “harsh” changes were made. Because of his position on the bench, he cannot specifically support Evers’ budget proposal, adding “But I think all of us would agree that there’s a need for reform.”

“Our theory is, no matter how far they’ve gone down the wrong road, it’s not too late to turn back.”