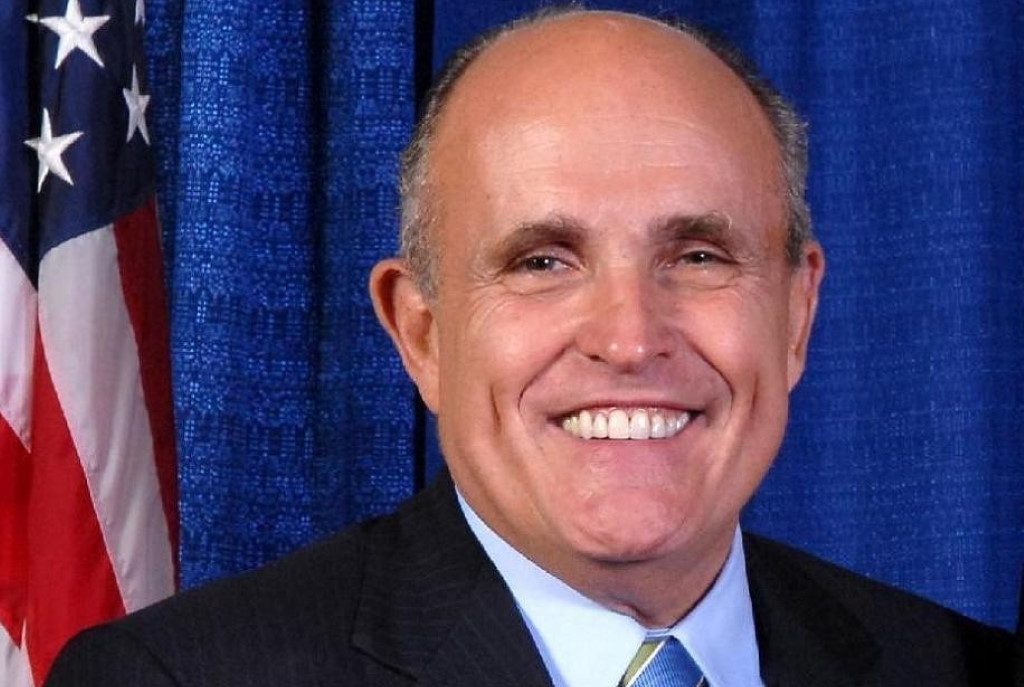 Rudy Giuliani. Photo is in the Public Domain.

On March 26, Dominion Voting Systems sued Fox News for damages of at least $2.9 billion for Fox’s spreading the claims that Dominion election equipment was used to change votes and help overturn President Donald Trump’s re-election. Many of the accusations made on Fox first appeared in a series of lawsuits made in courts in Wisconsin and other competitive states attempting to reverse Trump’s loss in his 2020 re-election bid.

The suit opens by alleging a “massive election fraud” in Wisconsin. It goes on to claim that the “fraud begins with the election software and hardware from Dominion Voting Systems Corporation.”

Much of the complaint, signed by Attorney Sidney Powell and accompanied by 19 exhibits, is devoted to an attack on Dominion. The complaint then turns to Exhibit 1, the so-called “Dominion Whistleblower Report,” an anonymous account by someone who claims to have been a witness to the origin of the Dominion software.

According to this account, the Dominion software was developed to assure that Hugo Chavez won the Venezuelan presidential election by having the ability to switch votes from one candidate to another. Further complicating this tale, the account claims that the software with this ability was originally developed by Smartmatic, a Dominion competitor, but somehow was incorporated into the Dominion system.

The purported whistleblower discounts the paper ballot produced by the Dominion machine because “It is the software that counts the digitized vote and reports the results.” But what evidence is there that this happened? The complaint then turns from the anonymous witness to the creation of the software to an equally anonymous “statistical expert” who concludes “that machines from Dominion Voting Systems (Dominion) produced abnormal results.” In support of his conclusion, the expert includes the following scatter plot, which I reproduce below (regular readers of this column will know that I cannot resist a graph, even if it is someone else’s).

Although the author does not explain it well, it appears that each dot represents a county—red for counties that use Dominion equipment and blue for all others. The oversized dots represent Wisconsin counties, and the two lines were generated using regression. The horizontal axis shows Joe Biden’s predicted fraction of the vote and the vertical axis his actual fraction.

The most striking aspect of the graph is not the small difference between the two regression lines but the overperformance of Biden in Wisconsin counties. In almost all of them Biden does better than predicted, no matter whose equipment is used. Unfortunately, the purported statistical export does not explain how the predicted values were produced, so the origin of Biden’s apparent over-performance in Wisconsin remains unknown. 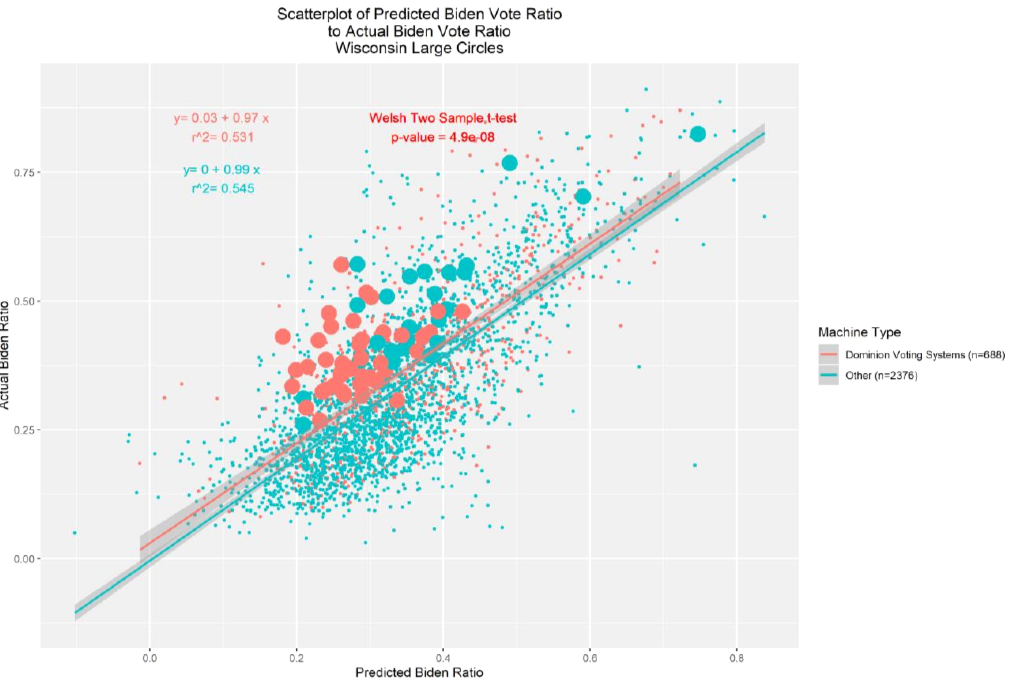 Next, the complaint includes the graph below showing the vote count over election day and through most of the night. Again, the red line shows Trump’s vote count and the blue Biden’s. The complaint describes the encircled jump in Biden votes as “statistically impossible vote counts in the early morning hours away from scrutiny,”

Yet this pattern was widely predicted in the weeks up to the election. Trump had continually attacked absentee balloting in those weeks, leading to the expectation that his voters would be more likely to vote in person while Biden’s would favor absentee ballots to avoid long lines and reduce the chance of getting COVID-19. 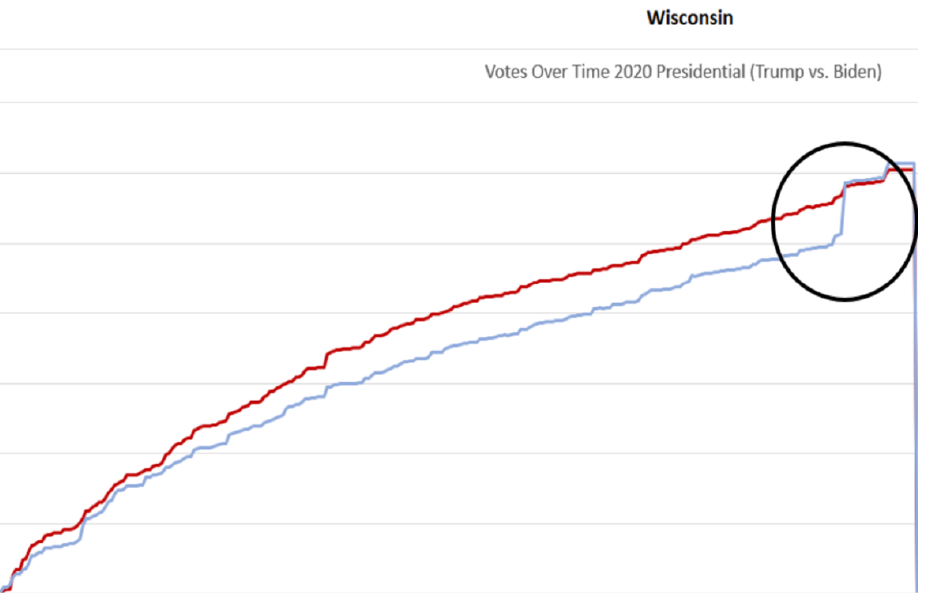 The complaint singles out Milwaukee County and the City of Milwaukee, along with Dane County, La Crosse County, Waukesha County, St. Croix County, Washington County, Bayfield County, and Ozaukee County as exhibiting “an especially egregious range of conduct.” The U.S. Election Assistance Commission publishes its Election Administration and Voting Survey, which among other things includes the firm making the equipment used in the election.

Because the survey is organized by city, rather than county, I looked at eight cities, one in each of those counties: Milwaukee, Madison, La Crosse, Waukesha, Hudson, West Bend, Bayfield, and Port Washington. Only West Bend and Port Washington use Dominion equipment to collect and count votes. And the suit did not ask for votes in those cities to be thrown out.

The fact that Trump’s loss in Wisconsin cannot be blamed on Dominion did not stop Powell and her allies, notably Rudy Giuliani, from continually attacking the company. Partly of the problem is the suit in Wisconsin was copied from similar complaints in other states with minimal editing.

For example, it demands “immediate production of 48 hours of security camera recording of all rooms used in the voting process at the TCF Center for November 3, 2020.” The TCF Center is in Detroit, so this was presumably copied from the suit in Michigan. Or perhaps it is copied from Georgia’s, given this language: “After a general election and recount, Joe Biden has been declared the winner of Georgia’s General Election for President by a difference of 20,585 votes …”

The lack of evidence for these conspiracy theories did not discourage Fox News anchors from broadcasting and amplifying them. Lou Dobbs, Maria Bartiromo, Jeanine Pirro, Sean Hannity, and Pete Hegseth all joined in spreading the election fraud story. In its recent lawsuit against Fox News, Dominion offers an extensive anthology of Fox News anchors offering Powell, Giuliani, and, later, Mike Lindell, the president of MyPillow, a chance to blame Dominion’s software for Trump’s losing the election.

Following the November 3, 2020 Presidential Election, Fox was the first network to declare that President Trump lost Arizona. This set off an uproar among Trump supporters, who viewed the network as insufficiently loyal to President Trump. Viewers began fleeing Fox to networks like OAN and Newsmax, which endorsed the claim that massive fraud caused President Trump to lose the election.

In a discussion with Maria Bartiromo about alleged Dominion vote switching, Giuliani said, “They did it absolutely in Milwaukee, Wisconsin.” Of course, even if it wanted to, Dominion could not switch votes in Milwaukee, as Milwaukee had no Dominion machines.

For a time, Tucker Carlson was an exception at Fox, demanding that Powell supply evidence for her accusations and cancelling an interview when she didn’t. Later, however, he joined the chorus, Notably, MyPillow was Carlson’s biggest sponsor.

Earlier this year, Dominion sued Sidney Powell for damages. The response from Powell’s attorneys is startling:

… no reasonable person would conclude that the statements were truly statements of fact. … Indeed, Plaintiffs themselves characterize the statements at issue as “wild accusations” and “outlandish claims.” They are repeatedly labelled “inherently improbable” and even “impossible.” Such characterizations of the allegedly defamatory statements further support Defendants’ position that reasonable people would not accept such statements as fact …

Unfortunately, a lot of Trump supporters did not conclude the claims by Powell and Giuliani were not truly statements of fact. And they acted on them, most notably on January 6th.