By Isiah Holmes, Wisconsin Examiner - Mar 29th, 2021 03:00 pm
Get a daily rundown of the top stories on Urban Milwaukee 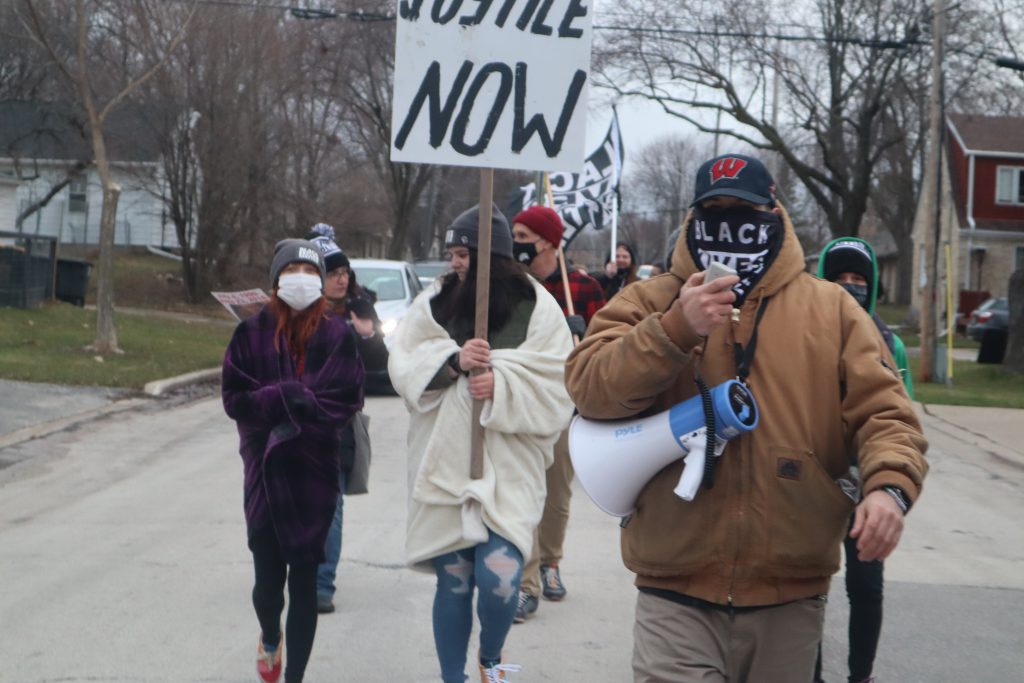 Protesters hold a march for Jay Anderson Jr., on the 300th day of protest in the Milwaukee area. Photo by Isiah Holmes/Wisconsin Examiner.

Beneath a gray, overcast sky, on a damp and windy day, protesters gathered in Madison Park near Wauwatosa. Among them were the parents of 25-year-old Jay Anderson Jr., who was killed by former Wauwatosa police officer Joseph Mensah in 2016. The group had gathered not only to pay their respects to the Anderson family, but to also celebrate the 300th day of Black Lives Matter protests in Milwaukee.

“I just want to say that we love ya’ll,” said Mariah Smith, a member of The People’s Revolution (TPR). The group formed after the George Floyd-inspired protests began in the summer of 2020. Since then, TPR has held demonstrations throughout southeastern Wisconsin from Milwaukee to Kenosha and elsewhere. Smith addressed not only Anderson’s parents Jay Sr. and Linda, but also the entire group. “We love ya’ll too,” Jay Sr. responded, echoed by others in the group of 30 or so.

Day 300 coincided with the second court date in the ongoing John Doe hearing into Anderson’s death. The hearing ended with WPD Chief Barry Weber being ordered by a judge to testify on May 4. “I don’t think any of us can fathom what ya’ll are going through,” Smith told Anderson’s parents. “You guys get up every day, and ya’ll keep the fight. Ya’ll got to go on with your lives before this tragedy first happened right here in this parking lot,” said Smith. “So I commend ya’ll, and I love ya’ll.” 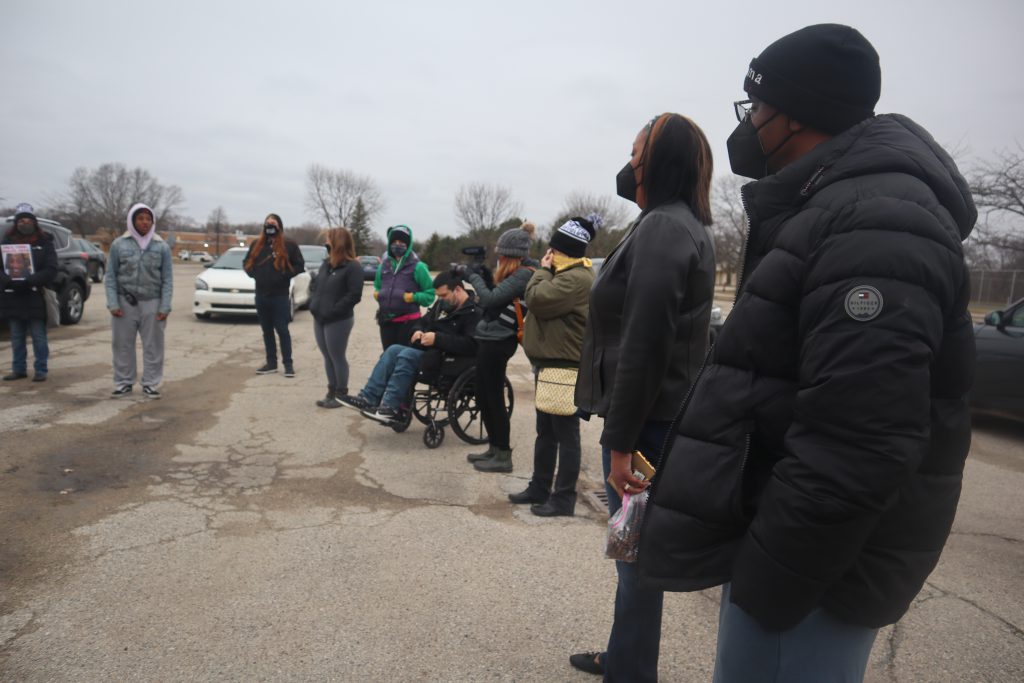 Jay Sr. and Linda Anderson, the parents of Jay Anderson Jr., (right) stand with protesters gathering in Madison Park. Anderson was killed in the parking lot in 2016 by a former Wauwatosa officer. Photo by Isiah Holmes/Wisconsin Examiner

Linda Anderson thanked the group, stating, “It’s ya’ll that’s keeping us going. I mean that, from the bottom of my heart. And I have to keep fighting for my son. He did not deserve this, and that’s the reason we’re out here every day.” After the speeches, the group organized a march and car caravan. The protesters, chanting Anderson’s name, traveled about a mile through the neighborhoods surrounding the park. As the marchers returned to the park, someone threw eggs from a hidden vantage point in a yard. Anderson’s parents and the marchers just grinned.

“You hid in your backyard and threw eggs,” said Smith once the march concluded. “At a group marching for justice?” Smith and other members of TPR saw the act as a demonstration of the attitudes the community needs to overcome.

In Kenosha, Jacob Blake is making an effort to educate another Wisconsin community about the toll of racism and police violence. Blake is pressing charges against the officer who shot him in August. Unlike the murdered Black people whose names TPR and other groups call out as they march for an end to police shootings, Blake survived his encounter with an armed police officer. The 29-year-old was paralyzed after officer Rusten Sheskey shot him in the back seven times at almost point blank range.

The Blake lawsuit alleges that Sheskey acted recklessly, and names him as the sole defendant in the case. Kenosha’s District Attorney’s Office cleared the officer of criminal wrongdoing in January. The lawsuit also alleges that Sheskey used excessive force and displayed “reckless indifference” when firing the shots near Blake’s children. 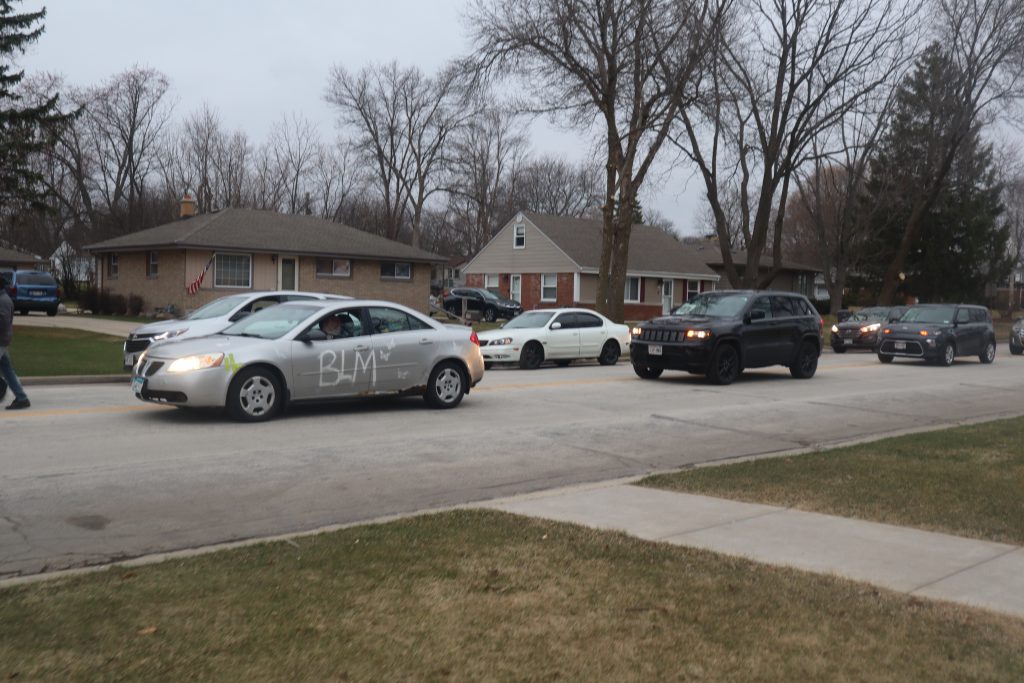 About half of the group made up the car caravan. Photo by Isiah Holmes/Wisconsin Examiner.

Aspects of the suit have parallels in the Anderson John Doe hearing. In that court case the Andersons aim to find probable cause to charge former Wauwatosa officer Joseph Mensah with second-degree reckless homicide and homicide by negligence with a dangerous weapon. Meanwhile, a civil suit involving the 2016 shooting of 21-year-old Christopher Davis is challenging qualified immunity, which often protects police officers from civil suits in such situations.

TPR and its allies were not discouraged by anonymous egg throwers — 300 days after they first took to the streets it was clear to organizers that there is much work to be done. But there have also been visible changes as a result of the mobilizations. Mensah is no longer employed at the Wauwatosa Police Department; Wauwatosa police officer must now wear body cameras; and Chief Barry Weber will soon have to testify at the John Doe hearing. The hearing is the only time witnesses have been called to the stand to testify about the Anderson shooting.

TPR also regularly conducts literature distributions, or “lit drops,” to help raise local awareness of different cases. Daily actions are announced in advance on the group’s Facebook page for those who want to get involved. “We ain’t stopping,” assured Smith.