Both sides of the river between Kilbourn and Highland are filled with attractions. 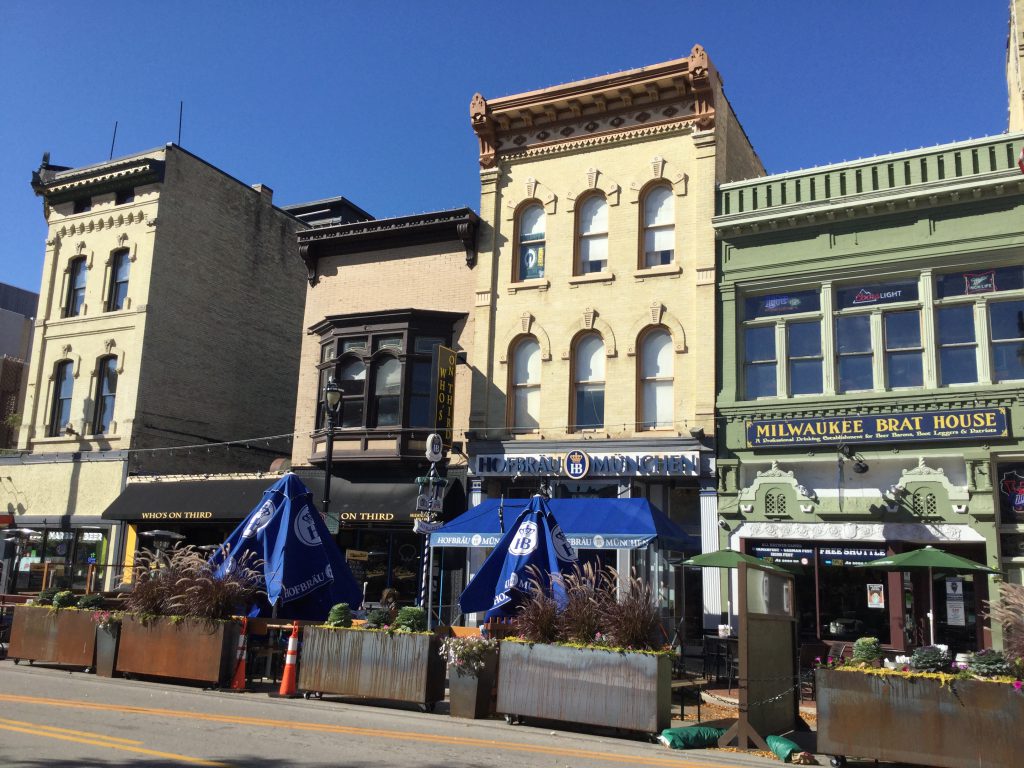 The name of the street resurfaced in 2021. On February 9, the Common Council voted unanimously to undo the compromise reached in 1984. Old World Third Street, from Wisconsin Avenue to McKinley Avenue would be known as Dr. Martin Luther King Jr. Drive.

This walk covers just two blocks on MLK/Old World Third (the signs have yet to be permanently changed), the tourist-heavy blocks from Highland to Kilbourn, plus a brief detour across the Milwaukee River to Saint Kate, an art-filled hotel not to be missed.

Start the walk at the Wisconsin Cheese Mart, a cheese-lover’s utopia, where more than 200 varieties of Wisconsin cheeses tempt customers to sample (in pre-pandemic days) and purchase. The shop has been on this corner for more than 80 years, as it’s grown from a small cheese boutique to its present enlarged size including the Brüdd Cafe, opened in 2019, where you can pair Wisconsin cheese with Wisconsin craft beer, coffee or wine.

Next door at Usinger’s, they’ve been stuffing sausages since the late 1870s when Fred Usinger came to Milwaukee with $400 and a pocket full of recipes from his apprenticeship to a wurstmaker in Frankfort, Germany. Fred wasted no time. He went to work for widow Julia Gaertner who ran a butcher shop on Third Street. He married her niece Louise Lorenz; moved in upstairs; bought out Gaertner; and started using his sausage recipes in the butcher shop. He sold those sausages to local saloons for free lunches, where customers insatiable appetite for them led to Usinger’s wurst works in the former meat market. Today Usinger’s sells a variety of smoked meats as well as hot dogs, brats, ham, turkey, bacon and much more. A visit to the shop is a window into another era.

Get a daily rundown of the top stories on Urban Milwaukee
Across the street, Mader’s, founded in 1902 by Charles Mader, was a bar with food, where a complete steak dinner cost twenty cents. Lunch set patrons back four cents, unless they bought two steins of beer, then lunch was free. The restaurant/bar, popular with German immigrants who lived and worked nearby, suffered a downturn when Prohibition arrived in 1920. Mader’s industrious wife Celia found another way to entice their customers. She enhanced the menu with German favorites like Sauerbraten and Weiner Schnitzel, so by the time Prohibition ended in 1933, Mader’s reputation as a fine dining restaurant serving German specialties was well established.

Places like Maders and Usingers became part of a unique local culture that Robert W. Wells, in his 1970 book, This Is Milwaukee, described this way: “Milwaukeans feel comfortable about their town. They don’t need to brag about it. The old girl may be dull and somewhat dowdy, but she makes great sauerbraten and she has Gemutlichkeit.”

The Spice House needs no introduction. Let your nose guide you into the shop, founded in 1957 by Bill and Ruth Penzey. Inquisitive palates coupled with a fascination with other cultures led to the Spice House and today’s popular blends such as Lake Shore Drive Shallot Seasoning, Brisket Barbeque Rub, and the popular multi-use Garlic Pepper Butcher’s Rub.

Just another block south, on Kilbourn, the Milwaukee County Historical Society occupies the former Second Ward Savings Bank, where more than 1,000,000 documents and 60,000 artifacts are stored. This former bank with its spectacular chandeliers, marble columns, and windows framed in cast iron, was built to service wealthy brewing executives.

Across Kilbourn, the Hyatt Regency occupies the site of the former Hotel Gilpatrick, an ornate five-story hotel opened in 1907 and razed in 1940. In 1912, the hotel gained notoriety when John Schrank, a bartender, fired a single shot which struck Theodore Roosevelt mid-chest. Schrank had traveled from New York to Milwaukee to protest a possible third term for for the former president, who was running as head of a third party, the Bull Moose party. Roosevelt, despite the direct hit, softened by his heavy coat and copious notes for his speech, went on to speak at the Auditorium for 80 minutes. As Wells writes, “If the copy of his remarks which he carried in his breast pocket had been thinner, he might not have escaped from Milwaukee with his life.”

Turn left on Kilbourn and cross the river. On your right you’ll see Saint Kate, formerly the InterContinental Hotel, where art is front and center. More than 100 contemporary works make up the permanent collection, while rotating exhibits fill galleries curated by the Museum of Wisconsin Art. Deborah Butterfield’s skeletal sculpture of an oversized horse, “Big Piney,” welcomes guests to this hotel where fine dining and the arts combine to make this a destination for both locals and travelers.

Retrace your steps on Kilbourn back across the river to Pere Marquette Park. Turn right on the paved bike trail. It’s alleged that Pere Jacques Marquette, a French Jesuit missionary, camped on this site for several days in November 1674. Look for his likeness in bronze holding a cross. Also, in the park, look for Schomer Lichtner’s “Dancing Through Life,” inspired by dancers in the Milwaukee Ballet, and his only public outdoor sculpture.

At Highland, turn left and you are back where this walk started, at the Wisconsin Cheese Mart, where a beer or two, and a plateful of aged cheese from the Mart, will remind you that Milwaukee does, in fact, have an abundance of gemutlichkeit. 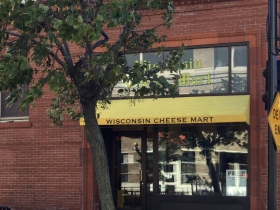 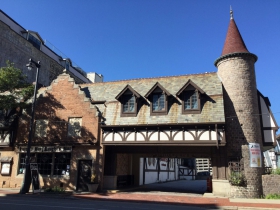 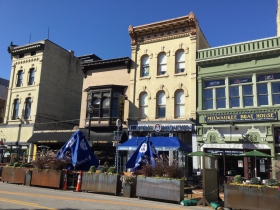 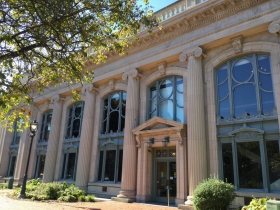 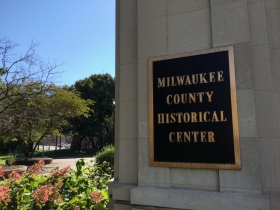 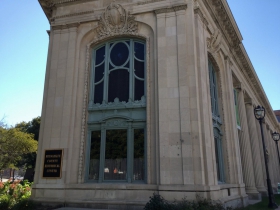