About That Wisconsin Wolf Hunt

By Isiah Holmes, Wisconsin Examiner - Mar 3rd, 2021 10:28 am
Get a daily rundown of the top stories on Urban Milwaukee

As Wisconsin reflects on its February wolf hunt, opinion remains split regarding the impact of the hunt. Some 216 wolves are known to have been killed during that brief period, exceeding a quota of 119 wolves that was set by the Department of Natural Resources (DNR) outside of reservation lands. By Feb. 24, the hunt was closed by the DNR, four days ahead of schedule.

Advocates for the hunt saw it as necessary species management, as well as an issue of constitutional rights for hunters. Conservationists, however, questioned several aspects of the hunt and how quickly it developed. In the last days of the Trump Administration, the gray wolf (Canis Lupus) was removed from the federal endangered species list. After a circuit court judge ruled in favor of a Kansas-based hunters’ organization, the DNR began preparing for the 2021 wolf hunt.

Several concerns over the hunt arose right away. The initial quota of 200 wolves accounted for some 16% of Wisconsin’s population, which, according to DNR numbers, stood at around 1,000 wolves. Researchers and biologists were also concerned about the hunt taking place during the wolf’s breeding season.

Due to the limited time frame between the court ruling and the hunt, public and tribal input in Wisconsin on the hunt was limited. Six zones were allocated in different parts of the state for hunting wolves, each with its own unique quota. Every single one of those quotas was exceeded. 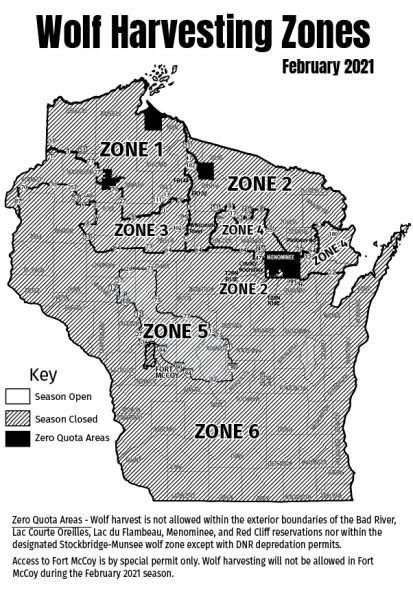 A picture showing how Wisconsin was broken up into 6 zones for the wolf hunt. Picture from the Department of Natural Resources.

The quota was exceeded even after the Ojibwe Bands opted to not hunt the wolves that were allocated to them out of the 200 wolf quota total. As Up North News reported, the wolf is spiritually and culturally significant for the tribes. Wisconsin’s native communities largely condemned what some described as not wildlife management, but trophy hunting.

“This is a deeply sad and shameful week for Wisconsin,” said Megan Nicholson, Wisconsin state director for the Humane Society of the United States, in a statement. “Trophy hunters and trappers drastically blew past the quota of 199 and killed over 200 wolves, using the most egregious methods imaginable and during the breeding season when wolves are pregnant.”

She added that, “entire wolf families were likely destroyed during this intense slaughter, highlighting how crucial it is that wolf management in Wisconsin immediately change before this heartbreaking situation repeats itself in November.”

3 thoughts on “About That Wisconsin Wolf Hunt”