Rolls back some of Act 10. Republicans likely to reject plan.

By Shawn Johnson, Wisconsin Public Radio - Feb 22nd, 2021 09:35 am
Get a daily rundown of the top stories on Urban Milwaukee 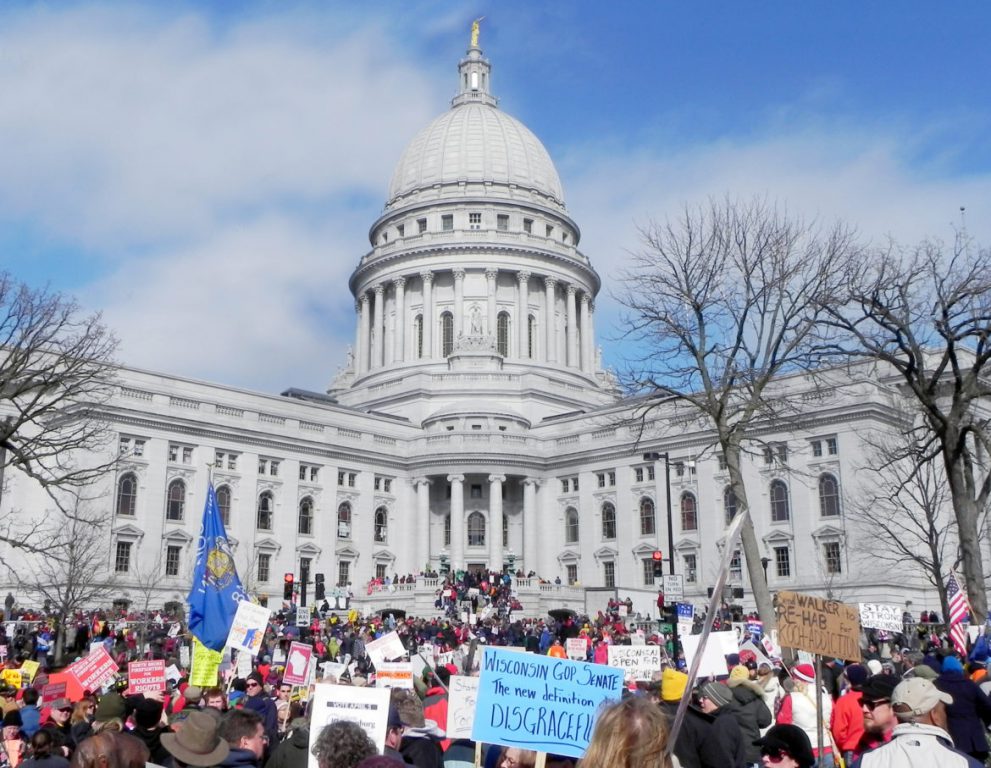 After Gov. Scott Walker unveiled the Wisconsin budget repair bill in February 2011, which sought to end collective bargaining for most public sector unions, thousands of protesters took to the streets of Madison in opposition. Protestors are seen here in front of the Wisconsin State Capitol on March 12, 2011, a day after the bill was passed. A recent poll found that over two-thirds of Democrats, Republicans and independents feel very or somewhat concerned about the current state of American democracy. Photo by Richard Hurd. (CC BY 2.0)

It’s not something Gov. Tony Evers has spent a lot of time talking about. And with Republicans running the Legislature, it has virtually no chance of becoming law.

But when the governor used his budget to propose the partial repeal of Wisconsin’s Act 10, it was celebrated by the unions and public workers who lost most of their bargaining rights almost a decade ago.

Evers’ budget would restore collective bargaining rights to “front-line workers,” a loosely defined term that would include a broad group of state and local employees who interact with the public.

For nearly 10 years, Act 10 made it harder for most public sector workers to unionize, and for those that did, the act made it more difficult for them to bargain for much on behalf of their members.

At the time Act 10 passed, it may have been the most divisive policy in modern Wisconsin history, attacked by Democrats as a union-busting bill that silenced workers at the same time it was praised by Republicans as a common-sense tool for balancing government budgets. As recently as 2018, a Marquette University poll found Wisconsin voters almost evenly split on whether to restore the union rights Act 10 took away.

Evers’ budget would do just that, restoring the power of front-line workers to negotiate over issues like health care and pension costs.

Secunda said his read of the governor’s budget is that it would also give unionized workers the power to bargain over occupational safety and health in the workplace.

Right now, public sector unions that remain certified can only bargain for wage increases up to the rate of inflation. Secunda said he believes Evers’ budget would remove that cap.

The governor’s budget would also eliminate the Act 10 requirement that unions complete annual recertification votes with a majority of all members, not just a majority of those voting. Secunda, who represents workers in labor disputes and has represented unions in the past, said that requirement is onerous and burdensome.

“It does require a lot of time spent making sure they meet those annual recertification requirements,” Secunda said. “That would be eliminated. That’s important.”

At the same time, Secunda acknowledged there’s “no realistic chance” Evers’ collective bargaining provisions will become law this year because Republicans who run the Legislature won’t allow it.

Republicans hold big majorities in the Assembly and Senate, where GOP leaders have already indicated they plan to scrap much of Evers’ budget and start over on their own.

“Things that he clearly knows have zero chance of ever passing the Republican Legislature, like the repeal of Act 10 and the legalization of marijuana, really seem to be a way that looks like he’s not serious about governing,” Vos said.

Conservative groups have also criticized the governor’s plan, arguing that Wisconsin’s experience over the past decade has shown the law works, especially with local governments and school boards.

“Most people have accepted it and moved on,” said Americans for Prosperity-Wisconsin Director Eric Bott. “The outcomes of Act 10 are overwhelmingly popular. We have not seen Democrats make it a campaign issue in a major way in almost a decade.”

Bott said he was concerned the plan could empower teachers’ unions at a time when some were resisting in-person instruction because of the coronavirus pandemic.

Still, others were clearly glad to see Evers propose the repeal, despite its long odds.

“I was honestly really happy,” said Kate Walton, an emergency department nurse at the University of Wisconsin Hospital. “We need a seat at the table. We need a voice.”

Nurses at the UW Hospital revived their union last year, but it wasn’t recognized by the UW-Madison School of Medicine and Public Health, which cited Act 10.

Walton thinks the public has seen nurses in a new light since the COVID-19 pandemic began, especially when nurses are the only ones in the room to comfort sick and dying patients.

“It’s a huge toll and it’s something we signed up for,” Walton said, “but at the same time, we’re carrying that weight for our patients and for their families now.”

Walton said they want the power to influence issues like working conditions and staffing ratios at the hospital. And they’re glad the governor’s budget would restore union rights to other types of front-line workers, such as teachers.

Even if the governor’s plan is doomed in the short-term, Walton said it’s a discussion worth having.