Barrett and council members reflect on racial division and what the renaming symbolizes. 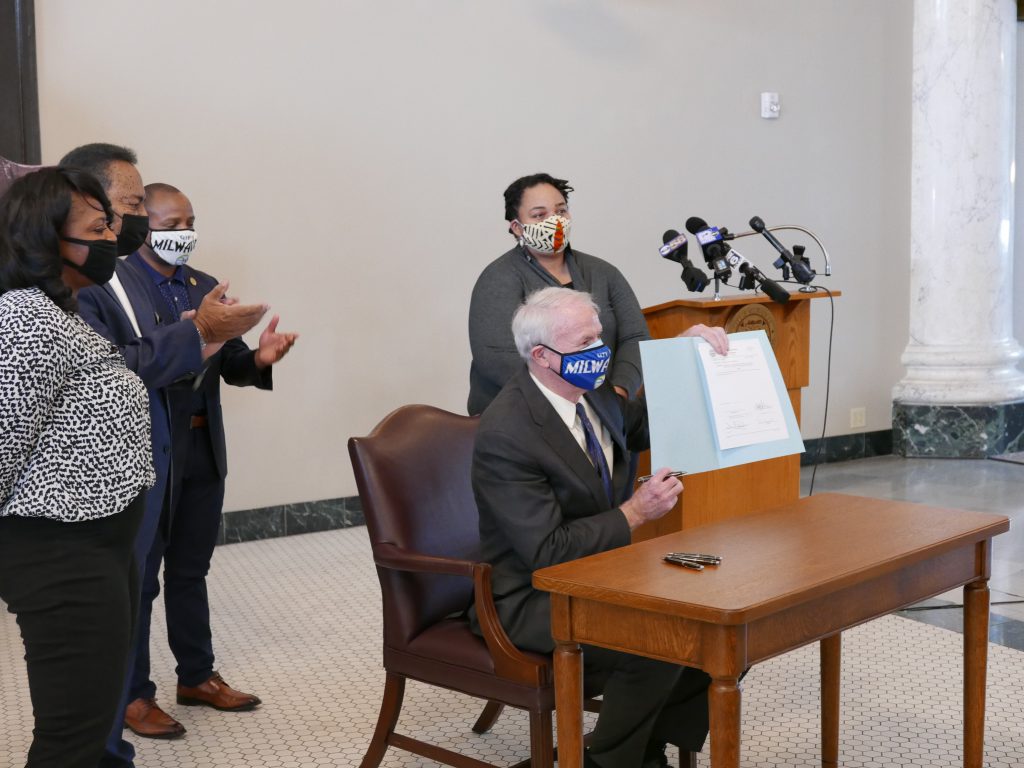 The resolution was sponsored by Alderwoman Milele A. Coggs and unanimously co-sponsored and supported by the rest of the Milwaukee Common Council.

The renaming will extend Martin Luther King Jr. Dr. south, so it will run from W. Capitol Drive at its north end to W. Wisconsin Avenue at its south end. The city is working with local business owners on the logistics and a timeline for replacing the current street signs.

At a signing ceremony held at the Milwaukee County Historical Society, 910 N. Old World Third St., Coggs said she couldn’t remember the council ever unanimously passing a resolution before it even made it to committee, as was done for this renaming.

This unity was in stark contrast to the division that created two different names for the street.  Back in 1984, the council voted to rename Third Street for Martin Luther King, the country’s most famous and much revered civil rights leader and activist. But some argued against letting the name extend into Downtown. A compromise was reached that stopped the name at McKinley Avenue, where it would remain Old World Third Street.

At the signing ceremony, Coggs and Barrett, joined by Council President Cavalier Johnson and City Treasurer Spencer Coggs, all lamented the racial division and antipathy that halted Martin Luther King Drive more than thirty years ago.

Coggs said she hoped the renaming of the street will be a symbol for the city’s ability to alter and correct the mistakes of the past. “We have the ability to change the direction and trajectory of this city in the future as it relates to equity and social justice,” she said.

Reflecting on the history behind the renaming, Barrett quoted King: “He once famously said the arc of the moral universe is long, but it bends toward justice. I think that is fitting today as we complete the work that we began in 1984.”

Johnson noted that street names, just like redlining and decisions about where to locate freeways and train tracks, are part of the city’s legacy of racial segregation. He said that while there has been a lot of support for the name change, he and his colleagues on the council have also received a lot of opposition. “So yes, the arc of the moral universe is long and yes it bends towards justice. But at the same time, too, though, there is a mountain of despair. And sometimes out of that mountain of despair you need to extract a stone of hope,” he said, also quoting King’s famous “I Have A Dream” speech.

“It should not have taken this long,” he said. “But now it’s going to be done and it’s thanks to Ald. Coggs.”

Treasurer Coggs was a representative in the State Assembly when he learned the street that he grew up calling “three street” would be named for King. “I thought that was great,” he said, “but then I found out that they were naming much of it but not all of it.”

Ald. Coggs is the treasurer’s niece, and he said it’s a “blessing” to have her be the driving force behind the naming and “going to the heart of where Milwaukee is going.”

One thought on “It’s Official, Old World Third Will Be MLK Drive”