It’s a Wisconsin prairie reborn in the city’s center. And a wonderful walk. 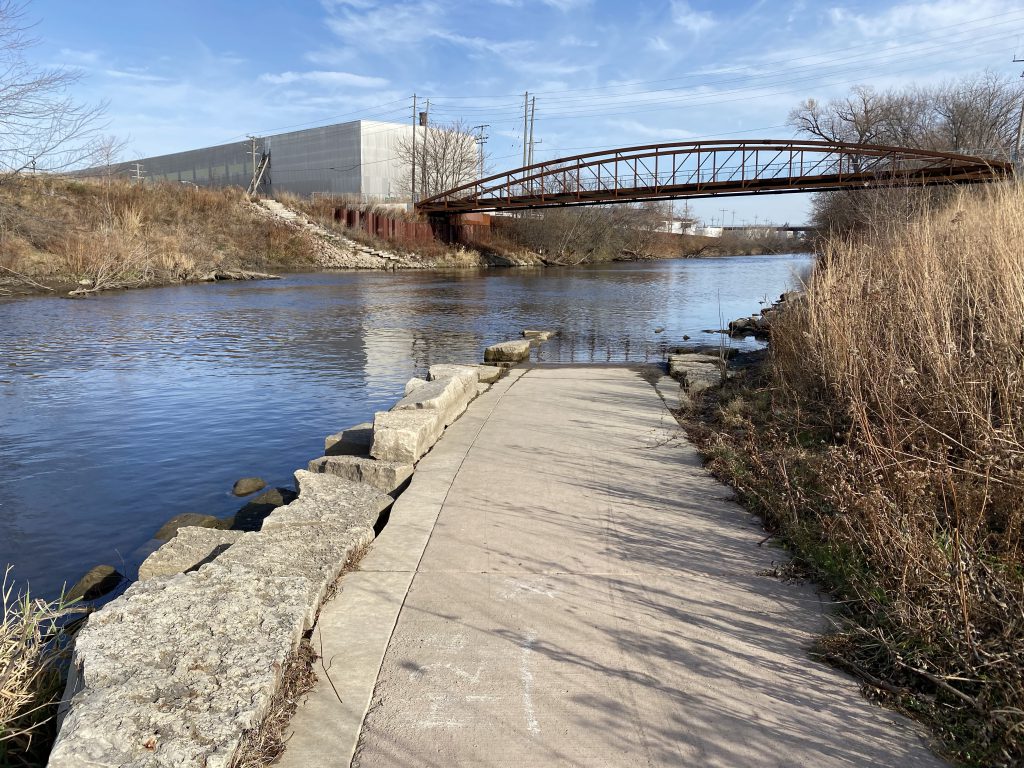 It takes a considerable stretch of imagination to envision the railroad yard that formerly occupied this land when you enter Three Bridges Park from the paved path that leads down a slight hill to the start of this walk. Instead of a wasteland, you have entered a 24-acre prairie on a paved trail that meanders up, over, and around several hills, with multiple views of downtown Milwaukee, plus a few close encounters with the Menomonee River.

This trail is more than just a pretty stroll through a rolling landscape studded with native grasses, perennial flowers and plants, and native trees. It’s an outdoor classroom for students who come to the Urban Ecology Center to learn about the Menomonee River habitat, native plants, regional history and Wisconsin’s glacial history.

A study of the topography of the park reveals kames, eskers, and drumlins, constructed alongside the trail to resemble the landforms left behind when the glacier departed Wisconsin approximately 10,000 years ago. Kames are rounded hills formed by glacial till (sediment carried and deposited by the glacier) left behind in depressions in the landscape, while eskers are ridges formed by receding meltwater sediment, and drumlins look like small hills, similar to kames, also formed by glacial till.

In the beginning, the Menomonee River Valley was a wild rice marsh where Native Americans farmed, hunted, and fished. In the late 1800s, their marsh was filled in to make room for progress when the Milwaukee Road railroad and its rail yards took over their land.

In 2002, several organizations spearheaded a design competition, which brought the deserted rail-yard wasteland back to life. It took a partnership of nine organizations, including the Urban Ecology Center, more than 10 years to create this park, a transformation one might call a modern miracle. It took planning, planting, and money, to turn railroad rubble into Three Bridges Park. It opened in 2013.

The seven man-made hills that represent glacial remnants are made up of eighteen inches of on-site soil, plus some additional dirt that was trucked in. That soil was capped with six inches of clean topsoil for planting, then covered with 60 species of native seed, both annuals and perennials. Since 2012, 50,000 plants, trees, and shrubs have been planted. In 2013, Urban Ecology Center volunteers went to work on the land, removing non-native invasive plants.

And the work continues. As of 2020, there were approximately 100 native plant species growing in the park, while most of the non-native plants are gone.

You enter another world when you leave Pierce Street at the Urban Ecology Center and walk down the path to the Valley Passage. Take time to look at the murals at the entrance that illustrate life on both sides of the Menomonee River, past and present. The Valley Passage represents an historical link between the Menomonee Valley and Silver City. This is where workers from the city crossed the river on a pedestrian bridge to their jobs in the valley. The original bridge was torn down in the 1960s when many valley jobs disappeared. It has since been replaced by the Silver City Pedestrian Bridge you see ahead as you exit the tunnel.

To continue into Three Bridges Park, turn right on the paved trail before the bridge. Across the bridge, the Hank Aaron State Trail continues east to the Harley-Davidson Museum and beyond. When you see the Three Bridges sign, you have officially entered the park. From here, it’s two miles to the end of the trail and the Mitchell Park Domes, that along with the Urban Ecology Center, bookend this four-mile round walk.

Along the way, many paths spin off to the left. Almost immediately, you come to a gravel path that takes you to the river, a place to linger and ponder the river’s past as an important commercial shipping route in the 1800s.

After you rejoin the paved trail, watch for another gravel path that leads to a hilltop, a clear view of downtown and a sitting log. Back on the main trail, just beyond the 35th Street overhead bridge, and before the Menomonee Pedestrian Bridge at 33rd Street, look for a paved path that leads to the river. This is the canoe and kayak launch.

Along the way, take time to explore the side trails; they are there for a reason. One leads to a small wetland, a nod to the former wild rice marsh; another to a pond, a habitat for students to explore; and a third climbs a hill topped with fat logs, a place to rest and enjoy the view. As previously noted, these hills were not placed on the landscape solely for your viewing pleasure. If you look closely, you can see the outlines of those drumlins, kames and eskers.

Close to the end, just beyond the 27th Street overhead bridge, you will come to Potawatomi Bridge, the third footbridge referred to in the name of this park. This pedestrian bridge crosses a railroad yard instead of the river and leads to the Domes. A dozen glacial boulders located adjacent to the trail, each two feet in diameter, resemble glacial erratics, large rocks transported by the glacier and left behind when it melted. More than a pile of rocks, it’s sculptural, reminiscent of this land, then and now. They also mark the turnaround for this four-mile walk that took you through land transformed from railroads and rubble to a living museum of Wisconsin natural history. 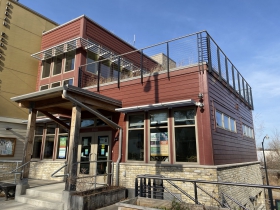 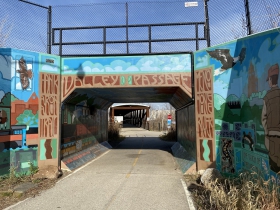 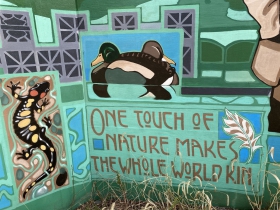 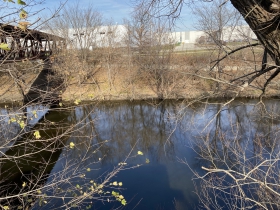 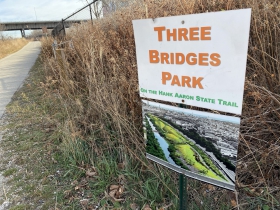 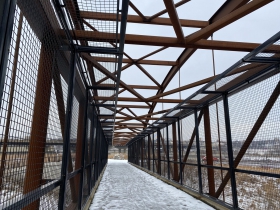 One thought on “Milwaukee Walks: Three Bridges Park Is a Living Museum”