Activist groups call for a reversal of the Trump administration's immigration policies.

By Isiah Holmes, Wisconsin Examiner - Jan 21st, 2021 06:39 pm
Get a daily rundown of the top stories on Urban Milwaukee 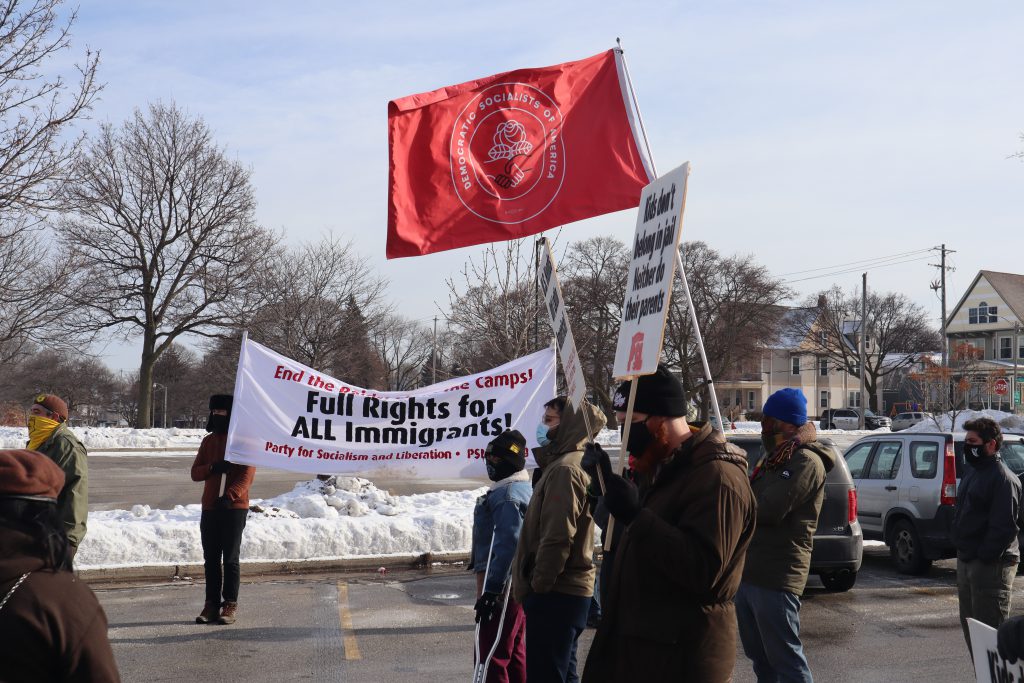 Just one hour after Joe Biden was sworn in at his inauguration, a coalition of community groups gathered in Milwaukee to call for the new administration to reverse the outgoing Trump Administration’s hardline immigration policies. The action occurred as the new administration was releasing plans to create a path for citizenship for more than 11 million undocumented Americans.

Organizers from Los Brown Berets, Voces de la Frontera Action, The People’s Revolution (TPR) and the Party for Socialism and Liberation (PSL) gathered on Milwaukee’s predominantly Latinx southside to demand an end to family separation, the detention of immigrant children and other policies that have targeted immigrant families over the past four years. Braving the brisk winter weather, the group of over 30 community members took their resolve, cultural flags and message to the streets.

Julio Gumeta, an activist with the Brown Berets, applauded the event as a bridge between Milwaukee’s north-side and south-side communities. Particularly during the pandemic, many issues facing the prominently African American northside are also present in the Latinx-dominated southside.

“We see it everywhere,” Gumeta told Wisconsin Examiner. “Whether it’s criminal justice or, even now, it’s really highlighted the inadequacies of the healthcare system when it comes to treating and helping Black and brown lives in our city.” Communities of color have suffered the most losses in the COVID-19 pandemic.

“We understand that it’s a shared struggle,” said Gumeta. “We all need to push for one another, support one another, be there for one another, and show TRUE solidarity. Because that’s the only way that we’re going to unite both sides of the city that have been pushed due to a capitalist system that wants to gentrify our neighborhoods, instead of addressing the root causes of what’s ailing these communities.” 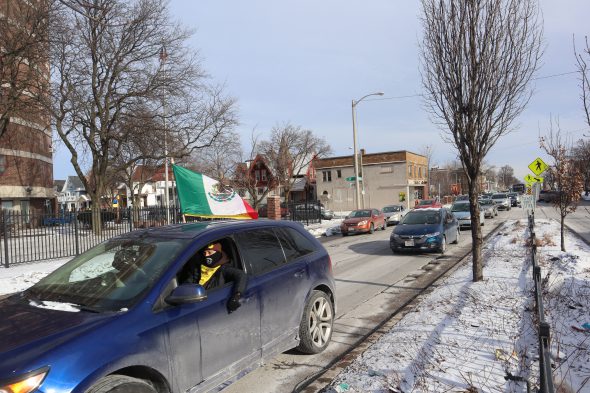 A car caravan makes its way across the Milwaukee south side as part of a national call to action for immigration reform. Photo Isiah Holmes/Wisconsin Examiner.

“Since the inception of the Declaration of Independence, the protection, respect and mere existence of Indigenous people to this continent has been ignored and disregarded,” said Andrea “Drea” Rodriguez, a community organizer with the Brown Berets who also recently ran for local office. “Countless treaties have been broken. Equal protections for the Indigenous people of the Americas have been denied. War crimes as well as human rights violations have continuously transpired on U.S. soil.”

The Milwaukee activists are calling upon the Biden Administration to confront this history head on by prioritizing immigration reform in its 100-day plan. “As an act of good faith, integrity and commitment to fulfill a campaign promise, we the people are holding the incoming presidential administration accountable and responsible for the immediate release of all children and families Indigenous to the Americas from the Immigration and Customs Enforcement (ICE) system,” Rodriguez added.

The Brown Berets and their allies are calling for the release of children held in ICE detention facilities within Biden’s first six weeks and reuniting all detained minors in ICE facilities with their parents within the first two weeks. Rodriguez says this group includes children that have been reported missing from the system.

The groups also are calling for the administration to provide a comprehensive COVID-relief plan for those detained in ICE facilities and termination of all plans for border walls, something that Biden has already pledged. The coalition is also seeking full transparency into what went on inside federal detention centers over the course of Donald Trump‘s presidency. They are specifically seeking comprehensive, written reports and investigations into abuses at the centers.

One speaker, Milwaukee native Joanna Love, reminded those present that the fight did not begin with Trump. Immigration policies under Barack Obama had failed her community. “We need to hold Biden accountable, because he started this with Obama — let’s not forget that. So welcome back, Biden. We are going to be fighting really hard, harder than ever.”

Love, who has family members who are undocumented, is determined to bring the fight to Wisconsin. “We need to close all of the ICE detentions here in Wisconsin,” she emphasized, pointing out that immigrants are detained in two facilities, in Kenosha and Juneau. “It’s unacceptable that we have those detentions right now, catching our neighbors, our community members, our family members, our friends.”

Christine Neumann-Ortiz, executive director of Voces de la Frontera Action, highlighted what Jan. 20 means for immigration activists. “Today is not just the inauguration of President Joe Biden and Vice President Kamala Harris,” she said. “It’s also the closing of a dark chapter in the last four years, under the previous administration. This chapter was closed as a direct result of the hard work of Black and Latino people, and people of color who formed a multiracial coalition to drive this dangerous administration out of office, and to create a new opportunity before us.” 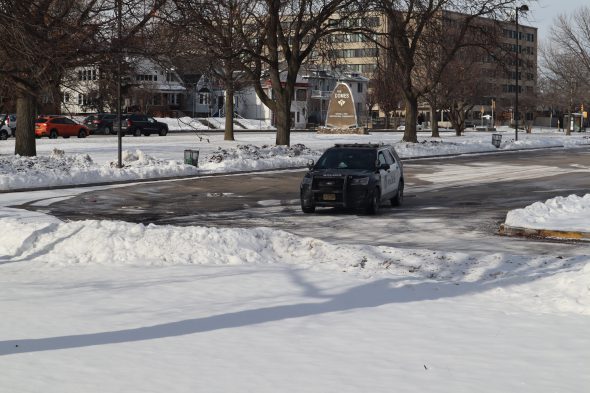 Biden has already announced a number of executive orders that will affect immigrants, including revoking travel ban that affected people from primarily Muslim and African countries and terminating the national emergency that facilitated the construction of the border wall that was one of Trump’s cornerstone campaign promises. And the new president has already floated ideas of creating a task force for reuniting children separated at the border.

“We are here to celebrate that we have gotten this far,” said Neumann-Ortiz. “There is now a break within the Republican Party from legislators, to voters, to others who saw the threat that landed at their doorstep.”

New COVID-19 relief measures are critical, the group added, especially for essential workers. Many people from low-income, Black, brown, and immigrant communities, they said, have been pushed back into workplaces without adequate protection during the pandemic.

Neumann-Ortiz said Voces de la Frontera Action is demanding the resignation of representatives who have protected Trump at the expense of democracy and failed to defend immigrants: U.S. Rep. Scott Fitzgerald, U.S. Rep. Glenn Grothman, U.S. Rep. Tom Tiffany and U.S. Sen. Ron Johnson. “They’re part of the problem, and they need to go.” Appealing to pro-business Wisconsinites she asserts, “We can’t say there is an essential industry and not care about the people who put food on the table.”

After delivering speeches, the rally participants marched  through Milwaukee’s southside. Car caravans made their way down the streets, with several protesters helping to direct traffic. The group stopped briefly at the Mitchell Street Domes before carrying on across the 27st bridge.