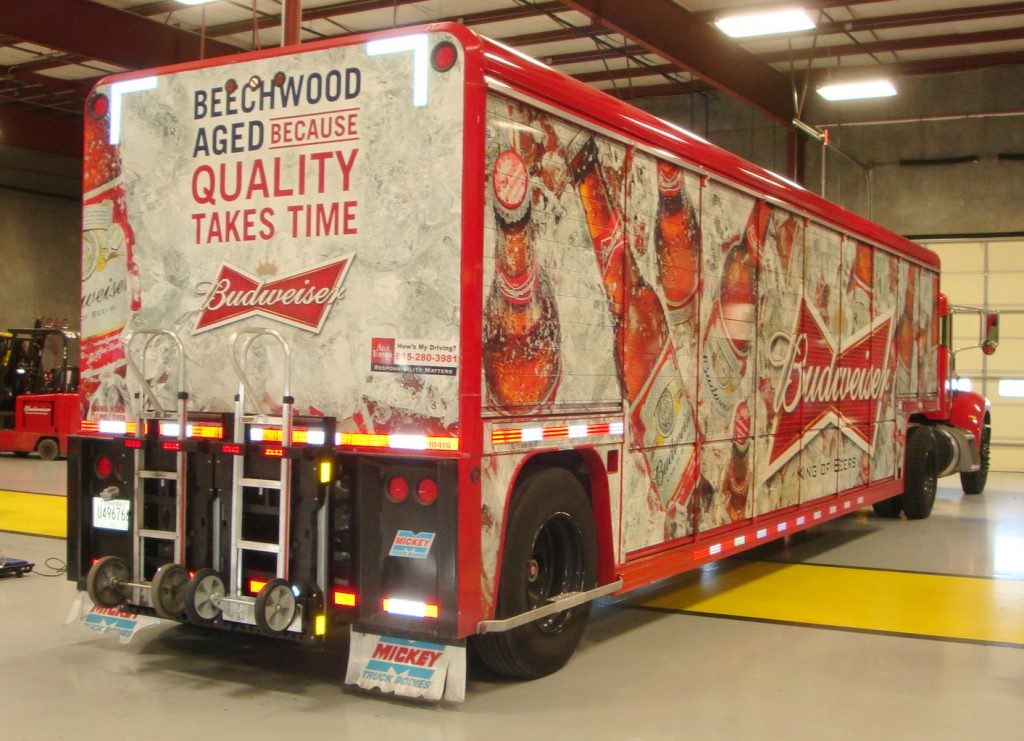 Beechwood Sales & Service, the local distributor of popular beers like Budweiser and New Glarus Spotted Cow, is among the plaintiffs in a multimillion dollar Massachusetts lawsuit and family spat. According to the complaint filed on December 21st, 2020 by Atty. Bill Weinreb of Quinn Emanuel, Boston, the action was brought:

to put a stop to the unlawful behavior of the family patriarch, Gerald Sheehan (“Gerald”), who is abusing his fiduciary powers over businesses owned by his children. Plaintiffs include Gerald’s son, Timothy Sheehan (“Tim”), and the trustee of trusts held for the benefit of Tim and his brother, John Sheehan (“John”).

The suit charges that Gerald Sheehan, 89, and his wife, Maureen received:

$80 million in fabricated ‘management fees’ unsupported by formalized agreements and documented only through a one-line invoice, as well as millions of dollars in interest on intercompany loans. These ‘management fees’ and interest payments have been used to finance Gerald and Maureen’s flagrantly wasteful spending, including:

(ii) a salary to Maureen (who performs no work  for the Companies) in amounts approaching $3 million;

(iii) Gerald and Maureen’s purchases of tens of millions of dollars’ worth of expensive artwork, furniture, automobiles, real estate, and women’s jewelry for their own exclusive use; and

(iv) charitable contributions to their pet charities  in their own names in amounts that vastly exceed the amount of shareholder distributions issued. [Emphasis original — Ed.]

John Sheehan, 59, of River Hills, is the General Manager of Beechwood Sales & Service of New Berlin, a division of the Sheehan Family Companies. The parent firm had estimated annual revenues of $1 billion derived from beer sales in 13 states and the District of Columbia. Tim Sheehan, 62, opened Beechwood here in 1987 with a staff of 38. He ran it until 1993 when his brother, who joined the firm in 1989, took over the position he holds today. According to the suit, revenues have increased fourteen-fold during his tenure. Beechwood is the third largest of the company’s divisions by sales, and now employs 250 in Wisconsin with warehouses in New Berlin, Menomonee and Wausau. Of the $80 million in management fees from 2012-2019 cited in the lawsuit, Beechwood’s share was a hefty $24,317,135.16.

Although only John, Tim and another brother, Chris, play an active role in the Sheehan Family Companies, another five siblings share in the ownership through a series of trusts, and various formulae. None of the eight have a vote in how the company is run. That is the sole prerogative of Gerald Sheehan. 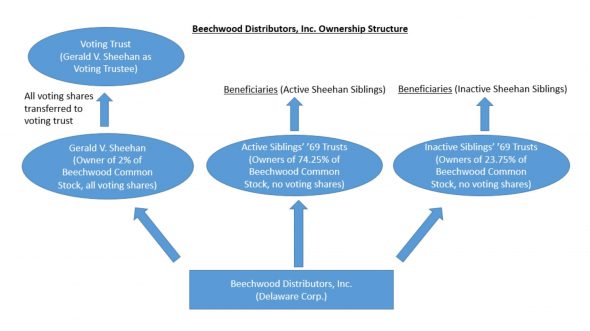 Since the 1987 purchase of Beechwood, the three active siblings generally share 60 per cent ownership of all new non-Massachusetts divisions. The remaining 40 per cent is shared by all eight siblings. These are known as the “60/40” divisions. Previously owned companies, like the flagship L. Knife & Sons are owned equally among the siblings, and are known as the “1/8” divisions. All of their interests are held in 16 trusts — two per sibling.

According to the lawsuit:

The 60/40 Agreement has been an engine of wealth for the entire Sheehan family, enabling the Companies to grow into one of the largest distributors of Anheuser-Busch beverages (and other alcoholic beverages) in the country. Without the benefits promised to Active Siblings under that Agreement—including an ongoing remunerative role in the Sheehan Family Companies’ management and distributions from the 60/40 Companies—Tim, John and Chris would not have been willing to make the sacrifices needed to acquire and nurture new Anheuser-Busch distributorships.

Gerald Sheehan Knifes the Board

Since the 1934 Repeal of Prohibition, the alcoholic beverage industry has operated within a “Three-Tier System,” consisting of manufacturers, wholesalers and retailers. That year, L. Knife & Sons established an agreement to become a wholesaler for Anheuser-Busch products in Massachusetts. Gerald Sheehan joined the company in 1956 and married Maureen, the daughter of Donato Cortelli, also known as “Tim Knife.” His father, Luigi Cortelli, immigrated to Massachusetts from Italy in 1898, and began his grocery wholesale business with a pushcart, anglicizing his name to “L. Knife.” Whether Luigi had any experience in beer delivery during Prohibition is not known, (he sold beer pre-Prohibition) but when the King of Beers came calling, he was ready to roll.

Since Repeal the beer business has become increasingly sophisticated, and wholesale distribution franchises have become fabulously lucrative. But it takes more than a stable of horses and a shed of carts to acquire one, which is why the lawsuit points to the “sacrifices” made by the active siblings.

Budweiser has strict requirements, including requiring an “Equity Agreement Manager” (EAM) with a substantial [25%] financial stake in the business, as well as residence in the geographic region it was to serve and active involvement in the day-to-day business. Tim played that role at Beechwood, before moving to a similar role in Massachusetts. He was followed by John, who serves in that capacity today. “Tim and John gave up steady jobs in a bet on the family business, invested large sums of their own money and uprooted their families several times in different states,” according to the suit.

For two decades after Gerald Sheehan became manager of L. Knife, A-B prevented him from becoming an EAM elsewhere, preventing the family business from expanding until Tim joined the firm in 1983. A-B removed Gerald as EAM of L. Knife in 2000, having lost confidence in his abilities. Tim succeeded him, and noted his father’s increasing “impatience, arrogance, and disrespect for others” in 2011.

In 2012, the company’s board, composed of family members and outside advisors, suggested that Gerald Sheehan retire and hand his duties over to Tim, who had by then demonstrated a capacity to run the firm.

Gerald responded by disbanding the board. It has not been reconstituted since then.

The parties to the lawsuit claim that Gerald Sheehan engaged in a diversion of $80 million management fees from the 60/40 companies. These funds go to the “1/8” firms, thereby diluting the holdings of the 60/40 partners, they allege. Furthermore, no dividends are paid to the 60/40 companies except to cover certain tax exigencies.

Gerald Sheehan also diverted an opportunity for Beechwood to secure an A-B contract, instead attempting to assign it to L. Knife, a 1/8 company. The family firms engage in mutual borrowing. L. Knife charges the 60/40 subsidiaries above-market interest rates (up to nine per cent annually) when they borrow from it. But when L. Knife borrows from the 60/40 entities, it pays below-market rates (one per cent), the suit alleges.

Gerald also collected $46.87 million in salary from the management fees, averaging about $7 million per year.

According to the lawsuit:

In late 2016, Beechwood was presented with an opportunity to acquire certain valuable rights to a beverage portfolio located in Wisconsin. John, as the EAM of Beechwood, investigated this opportunity and met with the potential sellers on multiple occasions to discuss  the parameters of a potential deal. … Despite the fact that the opportunity had been presented to Beechwood, Gerald  (without justification) caused an acquisition vehicle controlled by L. Knife, rather than Beechwood, to make the initial purchase offer. Further, Gerald attempted to dilute Plaintiffs’ existing ownership interests in Beechwood through a newly-created entity that would have taken part in the acquisition. … Ultimately, the potential seller walked away from the transaction. In so doing, the  seller noted that it was ‘not receptive to offers from L. Knife,’ but would have been willing to deal  with Beechwood because of its ‘favorable reputation among Wisconsin breweries and other  relevant craft brewers.’

Gerald Sheenan has released a statement blasting his two sons at some length and including these salvos:

It is unfortunate that two sons would sue their mother and father who, across a lifetime of hard work that continues today, have built one of the country’s premier beverage distribution companies to benefit the sons and their six siblings. In the process, Jerry Sheehan, now in his 80s, has not only generated untold wealth for his family but also created thousands of good jobs…

Tellingly, none of the other Sheehan children have joined the suit, which essentially seeks to allocate more assets away from six of them to the benefit of Timothy and John…

Despite all that they have been given, and all they continue to take from the company, the sons want more, at the expense of their siblings, company employees (whose benefits they see as overly generous ) and charitable causes the company supports. In an attempt to get it, they have filed this ill-conceived and inaccurate lawsuit. That they did so just days before Christmas and even included their own mother as a defendant shows just how misguided their actions are.

Jerry and Maureen Sheehan will defend the litigation; their only question is why these two sons  are so ungrateful for having been given a life of almost unparalleled privilege.