It's the second suit challenging the election. A third could be coming. 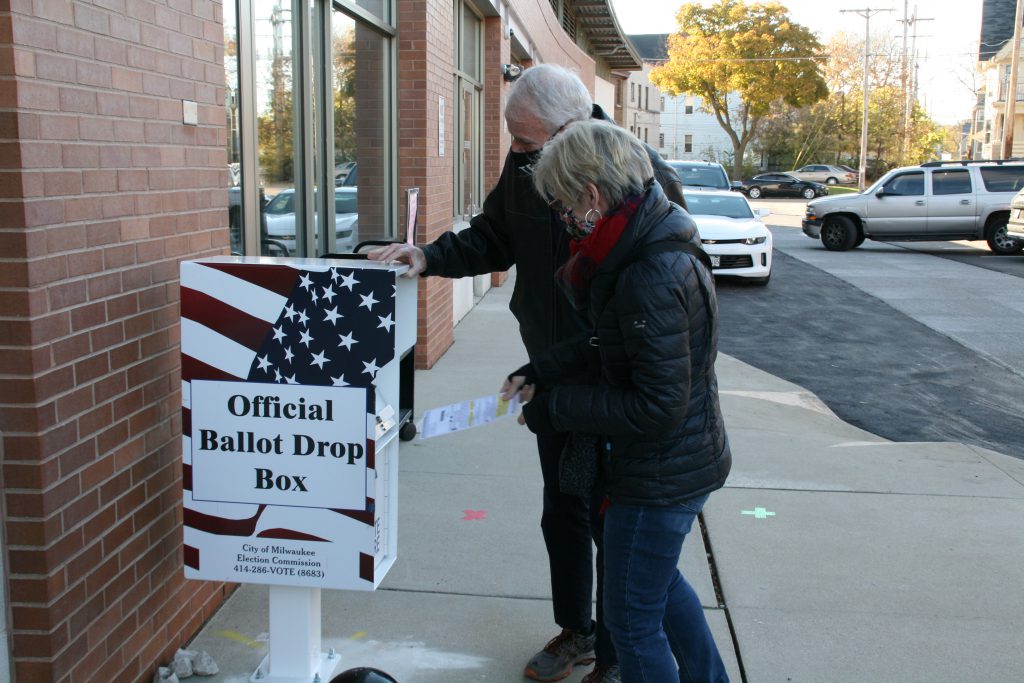 Mayor Tom Barrett and his wife Kris Barrett place their ballots in a drop box. Photo by Jeramey Jannene.

A new lawsuit filed with the Wisconsin Supreme Court seeks to have every ballot placed in a drop box thrown out. It seeks an emergency injunction to stop the Wisconsin Elections Commission from certifying the election results.

The City of Milwaukee installed 15 such boxes, purchasing them from an Oregon-based company that has customers across the country. The secured boxes, similar to a heavy-duty mailbox, were used to avoid concerns and potential delays associated with the United States Postal Service and mailing ballots.

The state elections commission endorsed the use of drop boxes, but the suit alleges that doing so constituted writing a new law into existence and that the commission does not have the authority to do so.

The suit says 500 such boxes were used across the state.

Attorney Karen Mueller of the Chippewa Falls-based Amos Center of Justice and Liberty filed the suit on behalf of her husband Dean Mueller.

Throwing out just absentee ballots placed in the boxes might not be possible. Milwaukee Election Commission Executive Director Claire Woodall-Vogg repeatedly told the media in the lead up to the election that the state system clerks use does not have a field to mark if the absentee ballot was returned via drop box. She relied on anecdotal observations and estimated that approximately 70% of the city’s by-mail ballots actually arrived via drop boxes.

The suit has a remedy for this: throw out the presidential election results. “The Wisconsin Supreme Court should nullify and set aside the results of the November 3, 2020 United States presidential election and should notify the Wisconsin State Assembly and Wisconsin State Senate that they must follow the constitutionally prescribed process…,” writes Mueller. Under such a scenario the Republican-controlled Legislature would get to pick the state’s 10 Electoral College participants.

The commission is slated to certify Wisconsin’s election results on December 1st.

A copy of the petition can be found on Urban Milwaukee.

It’s the second petition filed with the court this week. Another group, with similar arguments to those used by the Donald Trump campaign in challenging the recount, filed a petition on Tuesday to have the election thrown out. The Trump campaign has also signaled its intent during the recount process to file a suit.