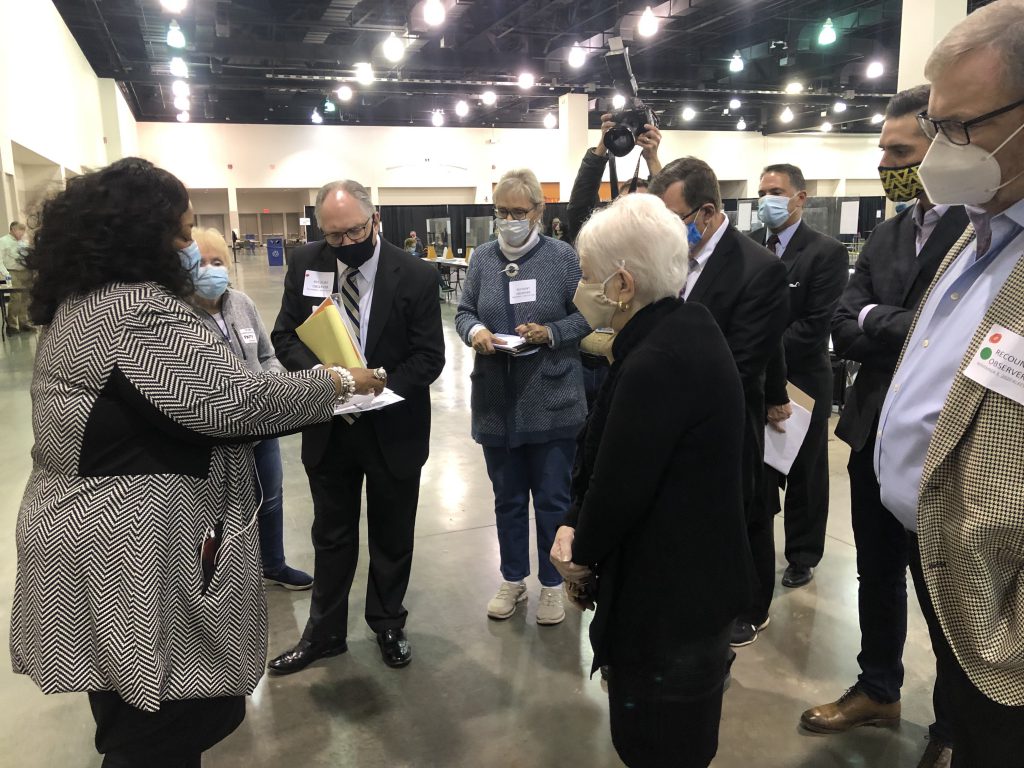 Milwaukee County elections director Julietta Henry presents a reconstructed ballot to commissioners as well as attorneys for both campaigns. Photo by Jeramey Jannene.

Work got underway just after 9:45 a.m. on the third day of Milwaukee County’s presidential election recount.

Milwaukee County Clerk George L. Christenson and Elections Director Julietta Henry maintain that the process will be completed by the December 1st deadline.

“Things are going more smoothly and I think we will continue to see that progress as things move along,” said Christenson in a press briefing. “We will make the December 1st deadline. We won’t disenfranchise the voters of Milwaukee County.”

The three-member commission and clerk’s office officials tried to tighten up guidance to observers at the start of proceedings.

“I want to make sure that the observers are paying attention so we can avoid unnecessary objection and delay,” said commission chair Tim Posnanski, a Democratic appointee.

Observers monitor the municipal workers performing the recount work, with objections brought to the campaigns for a possible challenge to the commission. A couple dozen ballots, most already rejected on election day, have been struck by the commission. Other ballots, including approximately 74 in the City of Milwaukee, are to be counted after being rejected on election day. Most of those ballots were previously rejected because city election workers had failed to sign the witness signature line on in-person absentee ballot envelopes.

“I want to give credit to both campaigns, especially the Trump campaign, they have done a better job of informing and educating their observers,” said Christenson. He said new observers are “overzealous” in issuing objections. On Saturday Christenson said it wasn’t the job of the commission to educate observers. “If observers have been here a few days, they get into a flow.”

Following commission rulings from the first two days, Posnanski said observers should not object to absentee envelopes without an attached application, folded ballots, ballots that have an undervote or overvote (no candidate or more than one candidate selected). The overvotes are rejected by the audited ES&S tabulation machines.

The Trump campaign is maintaining its standing objection to all in-person absentee envelopes (commonly called “early voting”). Following processing, each envelope, grouped by ward, is being placed into manila envelopes provided by the Trump campaign to preserve the records for a potential future legal challenge. There are approximately 108,000 in-person absentee ballots

The campaign’s objection centers on its request to verify any written applications and challenging the lack of a separate written application in many cases. The county’s legal team, and a commission ruling, maintains that a checkmark in a designated area of the envelope constitutes the application. The ballot envelope states that it is an application.

Get a daily rundown of the top stories on Urban Milwaukee
Trump attorney Stewart Karge stated for the record at multiple points that the campaign would maintain its standing objection to all in-person absentee ballots.

“While we are reiterating things, I want to reiterate that the Trump campaign is asking to throw out every in-person absentee ballot in Milwaukee,” said Biden attorney Christopher Meuler.

Karge’s request to review all applications was denied on a 2-1 party-line vote. The commission previously provided a spreadsheet detailing request data, as Karge requested on opening day. Henry said the recount process does not involve matching the applications to the absentee ballots.

The attorney offered for the Trump campaign offered to copy all of the documents in the presence of campaign officials on a high-speed copier it would provide.

Posnanski said that request wasn’t appropriate. “I completely agree with my fellow commissioner that no one will touch our stuff outside of our election officials,” said Republican appointee Rick Baas. But Baas did vote to provide the campaign with the records.

Karge asked if the commission would block a direct records request to the City of Milwaukee. Posnanski said no. “It seems to be inconsistent to say they are your materials and no one will touch them when we have to go to the City of Milwaukee,” said Karge. Baas stated that he wasn’t an attorney, but the records were present in the facility as the commission requested the county bring them on day one.

Saturday’s counting process, which ran until approximately 8:00 p.m. for a handful of municipalities, resulted in five suburbs finishing their work. A number of Oak Creek ballots were machine tabulated after the order came to stop work for the day, forcing the community to re-run the ballots on Sunday.

Bayside, Brown Deer, Cudahy, Hales Corners and Greendale are all finished with their work. The 18 suburbs are working on a staggered schedule, with more starting and expected to finish Sunday.

Urban Milwaukee is awaiting specific results from those communities. At the time of publication the county was in the process of submitting the results to the state.

The City of Milwaukee was scheduled to begin running its first ballots through counting machines on Sunday afternoon.

One light-hearted moment had City of Milwaukee election director Claire Woodall-Vogg presenting a challenged, damaged absentee envelope for review. She said it needed to be reconstructed based on a toddler getting ahold of it. “That is based on my own presumptions, we have a three-year-old,” said Woodall-Vogg. The ballot envelope was covered in scribbles.

Did the Trump campaign want to maintain its challenge? “I would like to see the three-year-old,” said Karge. Objection withdrawn.

See our earlier coverage for details on Friday’s or Saturday’s proceedings.