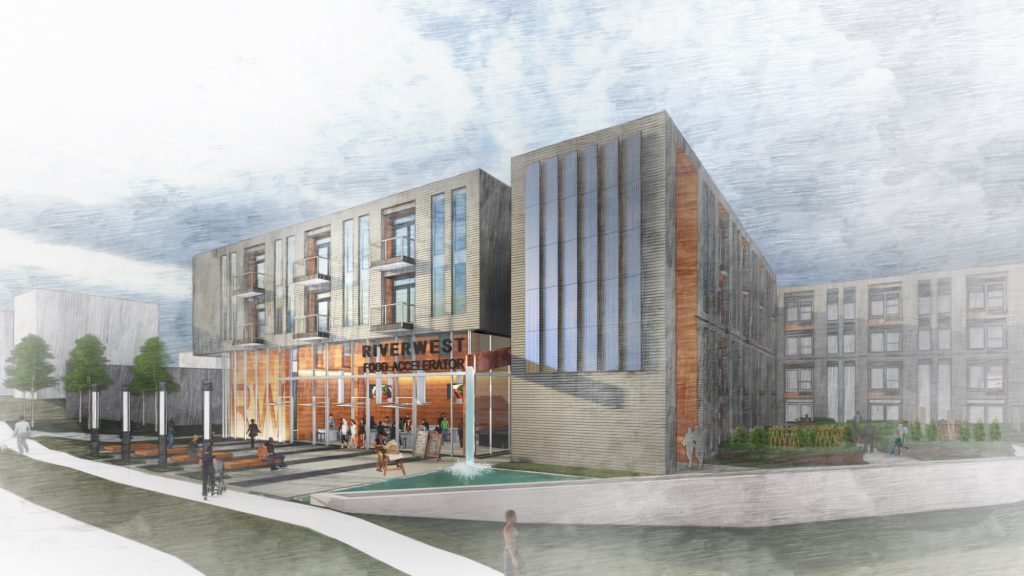 A partnership of General Capital Group and KG Development is poised to construct a new affordable housing development and food business accelerator on a vacant lot at 1136-1146 E. North Ave. in Milwaukee’s Riverwest neighborhood.

The city listed the 1.34-acre site for sale in March via a request for proposals process. The site is just west of UW-Milwaukee’s RiverView student housing complex. A Pick ‘n Save grocery store is located on the other side of E. North Ave.

The Department of City Development is advancing the General Capital/KG proposal to the Common Council, having selected the development team from six bids. The developers would be given an exclusive right to purchase the site for $750,000 until December 31st, 2022.

“I believe our concept hits the sweet spot of offering high-quality affordable housing and a bold new idea for a neighborhood meeting place centered around food,” said KG Development’s Anthony Kazee in a statement. “Our idea is fresh and cutting edge. And the design of our project reflects the forward thinking of our team.”

The plans call for 91 affordable apartments, financed with low-income housing tax credits. The team would apply for the competitively-awarded credits in December with Wisconsin Housing and Economic Development Authority announcing credit winners in the spring. The credits require specific units to be set aside at below-market rates for a period of 30 years to individuals making 60% or less of the area’s median income. The multiple years of site control would afford the development team the ability to reapply for the credits if necessary.

The units would consist of a mix of one-, two- and three-bedroom floor plans. Area Alderman Nik Kovac and DCD both have endorsed adding more affordable housing to the area. “Proposals that incorporate income/rent-restricted affordable units within the proposed development are highly encouraged, with a preference for [two bedroom] or larger units and/or units targeting low-income individuals below 50% [area median income],” says the city RFP.

Get a daily rundown of the top stories on Urban Milwaukee
The food accelerator would consist of a commercial demonstration kitchen and food distribution space. Known as the Riverwest Food Accelerator, the proposal is modeled after efforts the team has seen in other markets including the Union Kitchen in Washington D.C. The proposal is backed by many groups, according to a press release from the development team, including equipment supplier and kitchen designer Boelter, the Riverwest Food Pantry, Milwaukee Area Technical College‘s culinary program, Teens Grow Greens, and the MKE Food School. Programming would include low-cost commercial kitchen rentals, cooking classes and an urban agriculture demonstration facility. The kitchen would occupy a two-story space with large windows facing the street.

“I look forward to working with the neighborhood to develop a fun and meaningful program for the Riverwest Food Accelerator. I think this idea is spot-on and delivers a space that currently isn’t available in Riverwest. I look forward to working with all the great organizations that have expressed interest in our concept,” said Sig Strautmanis, partner at General Capital.

The developers said they would launch a website and formal community engagement process in early 2021. The partners are working with Engberg Anderson Architects on the building’s design.

The proposal includes the acquisition of a triangular parcel, 1164 E. North Ave., between the vacant lot and UW-Milwaukee student housing complex. In 2012 developer Todd Davies proposed a 122-unit, five-story building on the two sites, and a small lot to the west, 1132 E. North Ave. The adjoining private lots are owned by ReadCo., but the development team only plans to acquire the city lot and eastern private lot.

The site has a retaining wall near its northern border that compensates for the sharp grade change between E. North Ave. and E. Walworth St. Although construction never started on Davies’ project, the developer did perform excavation and other pre-development work on the site in 2012. The city previously used a building on the site for sanitation services.

Both KG and General Capital are pursuing affordable housing projects elsewhere in the city. General Capital, one of the Milwaukee area’s largest real estate firms, is working on the redevelopment of the Martin Luther King Library with another developer. KG, an up-and-coming firm, is pursuing another vacant-lot-to-affordable-housing project on the 3300 block of N. Martin Luther King Jr. Dr.

The Common Council’s Zoning, Neighborhoods & Development Committee will review the proposal on Tuesday.

A zoning change or amendment to Davies’ approved Detailed Planned Development zoning package, would be necessary to advance the final project. 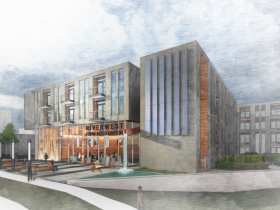 One thought on “Eyes on Milwaukee: Riverwest Apartment Complex Planned”