What Robin Vos Will Find

He cites “mail-in ballot dumps” in Milwaukee, but his own aide found no irregularities.

“With concerns surfacing about mail-in ballot dumps and voter fraud, Wisconsin citizens deserve to know their vote counted,” Vos wrote in his statement. “There should be no question as to whether the vote was fair and legitimate, and there must be absolute certainty that the impending recount finds any and all irregularities.”

Of special concern, Vos mentions the absentee ballots in the city of Milwaukee and when they were counted.

We can spare Vos a lot of time.

While the President of the United States, his campaign, and some of the Milwaukee conservative talk radio hosts like WISN’s Dan O’Donnell and Vicki McKenna are spinning tales of vote fraud, the people that actually crunch the numbers have a different story to tell.

One of the best Republican number crunchers, Joe Handrick, actually works for Vos in Madison. Handrick’s knowledge of elections is so respected, just about every media figure covering politics in the state follows the Wisconsin GOP’s election expert on Twitter.

Handrick posted on Election Night that the expected number of absentee ballots from Milwaukee would dramatically cut into President Donald Trump’s lead, and he was right.

Wisconsin is going to be very, very close. #Election2020

After Milwaukee came in, Handrick predicted the impact of the remaining outstanding absentee ballots:

Based on these numbers:
Start Biden up 8k.
Add 9.5k for Kenosha
Add 2k for Green Bay

Probably not enough GOP areas left to make that up. #Election2020 https://t.co/XmBo7zeeCW

They finally fixed it. But they are still missing Kenosha city.

Gannett currently has Biden winning Wisconsin by 20,540 votes. So the number of absentee ballots were not only anticipated, but so was the margin for Biden.

For those claiming there is something illegitimate about the Milwaukee absentees, we knew going into the night how many there were and were even able to estimate how they would break. #Election2020 https://t.co/wgBlm6PtAu

So what about the timing of the absentee ballot numbers being released? Vos already knows the answer to that.

Municipal and County Clerks, as well as mayors (like city of Waukesha Mayor Shawn Reilly) and other elected officials, have asked the legislature to allow municipalities to count absentee ballots early. This would have been especially helpful in a year when so many people voted absentee, either through early voting or through the mail, because of the COVID-19 virus. 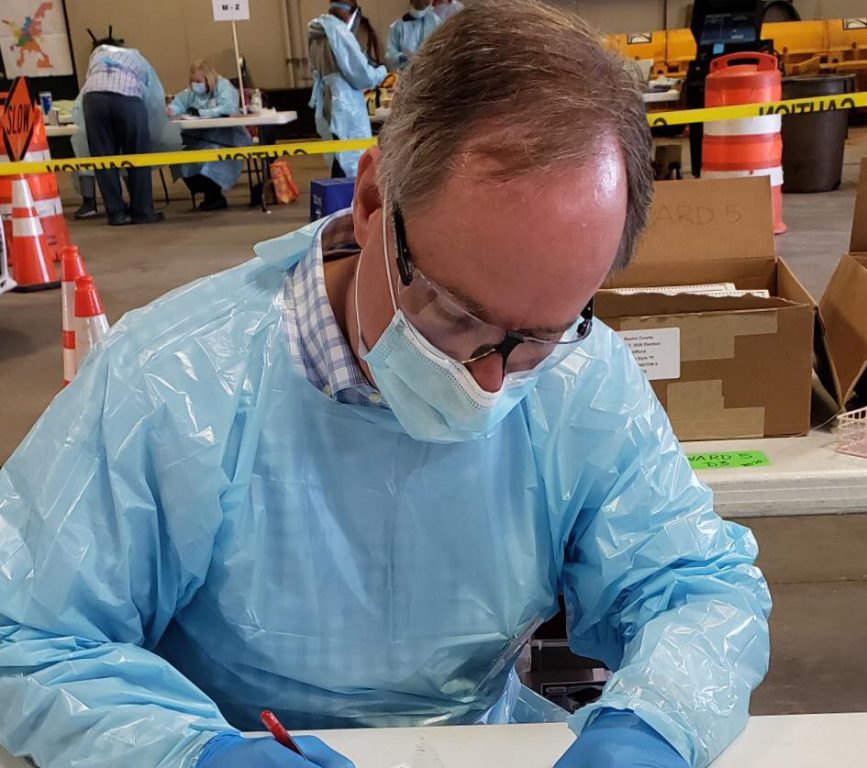 Assembly Speaker Robin Vos (R-Rochester) working the polls in the Spring 2020 election wearing PPE to prevent the spread of the Covid-19 virus on Spring Election Day.

As Vos knows, and as most Republicans know, Trump himself discouraged voting by mail. As a result, most of the mail-in ballots would be from Democrats.

Milwaukee does their counting of absentee ballots at a central location, and they do it after the polls are closed. This also occurred in 2018, when Governor Scott Walker lost, but there was no investigation then. Why? Because the Republicans understood at the time what happened and that the process of counting the absentee ballots was secure and properly observed – just like this year.

(That hasn’t stopped some irresponsible public figures on the right from demagoguing the 2018 results. Instead of questioning the results, Republicans should be asking why these people want to whip up conspiracy theories when there is nothing there?)

But what about the high-turnout in Milwaukee? How did they have more votes than registered voters.

If anything, Milwaukee underperformed. Perhaps Vos has a plan in mind to increase voter turnout in the state’s largest city since, as Handrick explained, it was lower than the rest of the state.

First, MKE had 80% turnout. Second, state turnout was under 89% (there were same-day registrations). Finally, MKE is 16% of state. So this is how the math can work. https://t.co/jpM7ll8rvr pic.twitter.com/MQi7TuiDN1

Remember, all this is unofficial until the canvas. #Election2020 https://t.co/35N7GdFCV6

Maybe Vos has in mind an investigation of abnormally high voter turnout in Republican areas:

It wasn’t just Minocqua, but the entire Lakeland area saw incredible turnout on Tuesday — and large margins for Republicans.

The chair of the Vilas GOP indicates it was 91% in Vilas. pic.twitter.com/6XQEKe7Rds

By the way, Handrick is not the only one who works with Vos that says there is nothing suspicious about the numbers. Assembly Majority Leader Jim Steineke (R-Kaukauna) had a few words to say on the subject:

Please read this.
The absentee ballots in MKE that were reported in the early morning hours were NOT a surprise. We…

Now, it’s highly likely that Vos is merely reacting to what he and his colleagues in the Assembly Republican caucus are hearing from the Republican base that is being stirred up by Trump’s campaign and the president’s family.

The total lack of action from virtually all of the “2024 GOP hopefuls” is pretty amazing.

They have a perfect platform to show that they’re willing & able to fight but they will cower to the media mob instead.

Don’t worry @realDonaldTrump will fight & they can watch as usual!

In addition, some Republicans are holding “Defend Your Vote” rallies: 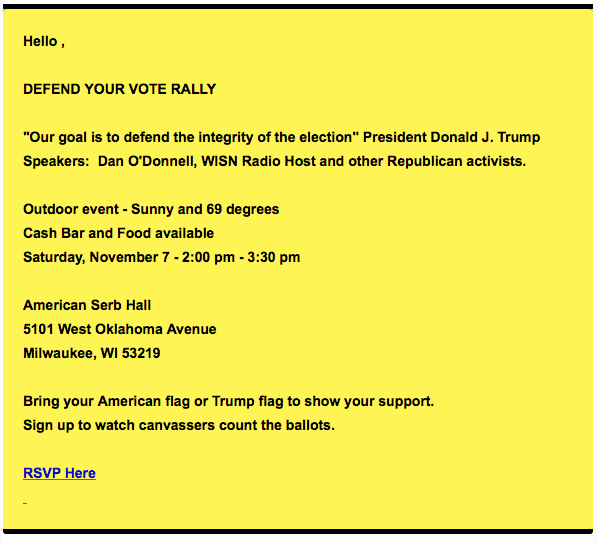 As a result, a number of Vos’ colleagues may be getting uncomfortable from being told they’re not doing enough. 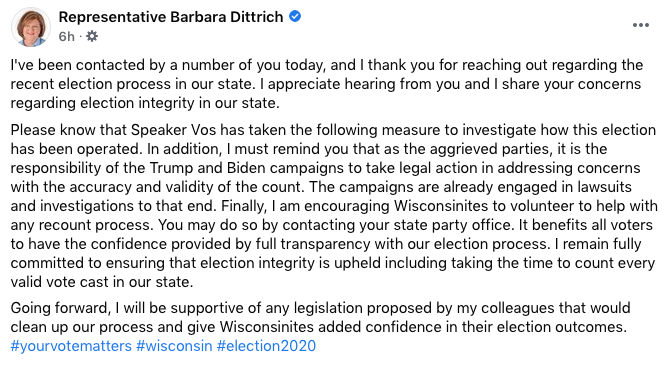 In addition to reacting to what the Republican voter base is demanding, Vos’ action is very similar to actions being taken by Republican legislative leaders in Michigan and Pennsylvania, according to WisPolitics. How much of this is being coordinated by the Trump campaign, and to what end, we don’t know yet.

However, if Vos is really determined to have a legislative committee investigate the 2020 election rather than just phone his office for answers, then he may want to start with a report of alleged attempted vote fraud across state lines.

The Milwaukee Journal Sentinel reports the Trump campaign was looking for volunteers in Wisconsin to call voters in Pennsylvania who haven’t yet turned in their absentee ballots.

Chris Olmstead, deputy director for Trump Victory in Wisconsin, on Thursday held a conference call with Trump staffers around Wisconsin and told them to find volunteers to call voters in Pennsylvania whose absentee ballots hadn’t been returned.

“Today and for the foreseeable number of days until they decide they are done counting, we are going to be chasing our absentee ballots over in Pennsylvania,” Olmstead told his team, according to audio of the call obtained by the Milwaukee Journal Sentinel.

Such absentee ballot harvesting, after the deadline for returning them, is illegal. After Vos has Handrick and Steineke testify at the committee to explain why there is no evidence of fraud with Milwaukee’s absentee ballots, perhaps he could ask Olmstead to explain what he was up to.

2 thoughts on “Op Ed: What Robin Vos Will Find”