Milwaukee Had A Drop in College Voters, Dramatic Shift in South Side Party Preference

Biden and Clinton had dramatically different performances in Milwaukee. See how.

Joe Biden and Hillary Clinton both won the City of Milwaukee by a margin of more than 58 points, adding over 143,000 votes to their statewide totals. But where those votes came from varied dramatically, demonstrating a mix of pandemic-induced temporary shifts and potentially long-term trends.

But if not for COVID-19, the city’s turnout would have beaten that in 2016 and Biden’s performance might have looked even better.

Three of the city’s 327 wards saw drops of over 400 votes cast (in-person and absentee). The ward that includes UW-Milwaukee’s Sandburg Hall student housing complex saw only 352 ballots cast, a drop of 955 since 2016. Two wards that span much of Marquette University‘s student housing saw 1,468 ballots cast, a drop of 917. Another ward just south of UWM had its turnout drop by 225 votes. Biden’s margin in each of the four wards still increased by 20 points or more versus Clinton’s performance in 2016.

Other wards surrounding each campus reported drops in turnout, with smaller margin expansions for Biden.

Meanwhile, the number of votes cast by greater Downtown residents surged, in large part because there are more of them.

Ward 186, which includes The North End apartment complex and a host of other new buildings saw its turnout jump by 523 votes (26%), but the percentage of registered voters casting a ballot went up by only 2%. Similarly, Ward 183, which runs from E. Kilbourn Ave. to the south end of the Historic Third Ward, saw 516 more votes cast, but only a 1% turnout rate change. Those voters preferred Biden to Donald Trump, and Clinton, with Biden’s margin expanding by at least 5%.

Other areas that have seen substantial housing development in the past four years, including Walker’s Point and the north end of Bay View boasted substantial vote total increases. Those votes also went for Biden by a larger margin than they did Clinton.

Get a daily rundown of the top stories on Urban Milwaukee
Data visualizations from Marquette Law School researcher John D. Johnson (included at the end of the article) help paint a broader picture of ways Biden and Clinton’s performances differed.

Biden substantially underperformed Clinton in wards that have a majority Hispanic or Latino population. His margin in one ward along S. Layton Blvd. dropped by over 20 points compared to Clinton’s. Biden’s victory margin shrunk by at least five points in most wards on the city’s near south side.

More examination is needed to determine if it’s a sign of a shift in the historic Hispanic and Latino support for Democrats and their policies, a dissatisfaction with Biden in particular or a sign that the white voters in the area, ones that repeatedly elected Robert Donovan, an avowedly pro-police alderman and Trump supporter, showed up in force to vote for Trump.

Biden still won the near south side by a margin far greater than he did most of the far west side and far south side of the city. But the number of votes cast in near south side wards declined, as it did in many of the wards overlapping majority Black neighborhoods on the city’s north side.

Biden underperformed Clinton in terms of margin in many of the majority Black wards, but overall the Democrat-Republican split in those wards remains among the city’s greatest. In many wards around the area of N. 35th St. and W. Capitol Dr., Biden earned over 80% of the vote.

Unlike the south side wards, many of the north side wards saw an increase in the percentage of registered voters casting a ballot. Further investigation is warranted, but that could indicate a decrease in neighborhood population, but an increase in voter participation.

The light shift in party preference could be a function of what else was on the ballot. Unlike 2016, there were a number of contested state assembly races that could have boosted Republican turnout.

And regardless of where the votes come from in Milwaukee, Wisconsin’s swing-state status ensures campaigns will continue to study, and spend, on ways to get as many votes as possible in the city. 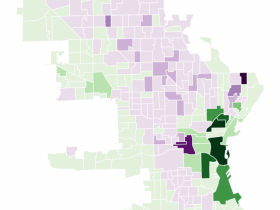 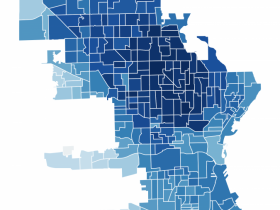 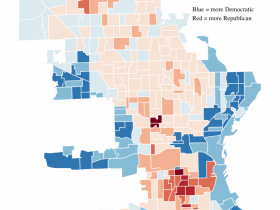 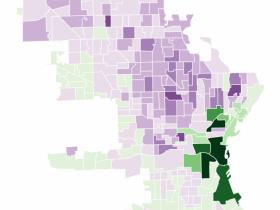 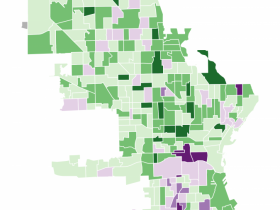 One thought on “Milwaukee Had A Drop in College Voters, Dramatic Shift in South Side Party Preference”