North-south corridor, predominantly comprised of people of color and people living in poverty, being studied for better transit.

The 27th Street transit corridor, which runs from W. Drexel Avenue in Franklin to W. Bender Road in Glendale, is being studied for transit enhancements and could potentially become the county’s second bus rapid transit (BRT) line.

This north-south corridor is currently served by the PurpleLine, one of Milwaukee County Transit System’s routes with the highest ridership. The transit system recently partnered with the Southeastern Wisconsin Regional Planning Commission (SEWRPC) to conduct a feasibility study for transit improvement in the corridor. 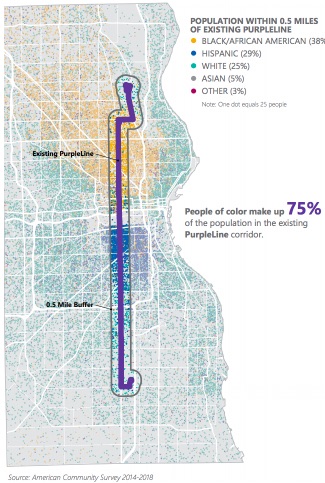 County Executive David Crowley’s proposed 2021 budget made a point to highlight the role transit will play in the county’s effort to improve racial equity. His budget mentions that the county is studying transit enhancements in this corridor. “Racial equity will be given deliberate consideration in the study, as this corridor is accessible to environmental justice populations and a high density of jobs,” says the budget report.

Of the more than 118,000 people that live within a half mile of the PurpleLine, 76% are people of color, 63% all corridor residents live in poverty. And one in five families living in the corridor are without a car.

“Enhanced transit service along this corridor would improve access for people of color and low-income residents who are more likely to rely on transit,” MCTS said in its quarterly newsletter.

In 2019 Milwaukee County declared racism a public health crisis as widely disparate health outcomes are one of the legacies of systemic racism. Crowley’s budget notes, “Communities along this corridor have also experienced some of the highest rates of COVID-19 infection and fatality in Milwaukee County, all of which underscore the need for investment.”

Kevin Muhs, executive director of SEWRPC, said his organization is in the early stages of the feasibility plan for transit enhancements in the corridor. It’s looking at what transit currently exists, what the population demographics are, what the physical attributes of the corridor allow for engineering and also where are the jobs and other activity centers located.

Taking that into account, along with input from local residents, elected officials, business owners and other stakeholders, SEWRPC will develop a few “locally preferred alternatives” that could include both bus and rail transit options.

Then, of course, all this will be weighed against what the county and any partnering entities can afford to pay for.

The county executive’s budget specifically mentioned bus rapid transit (BRT) service, which is an approach to transit improvement being implemented on the Wisconsin Avenue East-West corridor from downtown Milwaukee out to Wauwatosa. While no strict definition for BRT exists, it often includes a combination of dedicated lanes, off-bus fare collection, fewer stops with actual stations and other enhancements designed to speed up service over traditional bus service.

Get a daily rundown of the top stories on Urban Milwaukee
The East-West BRT project isn’t expected to be completed and up and running until late 2022. The Trump administration announced federal support for the $54 million project in late May via a tweet. Many of the highest use bus stops in Milwaukee County are where the PurpleLine and East-West BRT project intersect at W. Wisconsin Ave. and N. 27th St.

While BRT could end up being an option in the 27th Street corridor, Muhs said his organizations won’t limit the possible alternatives to just that. In fact, that’s why they’re doing the feasibility study, to determine what’s the best way to improve transit for the people that live in this corridor.

The public involvement part of the study is expected to begin soon, Muhs said. Though, with the pandemic, much of it will likely have to be virtual.

The PurpleLine was launched in 2015 as part of a strategy by MCTS to leverage smaller federal grants to stave off budget cuts and provide slightly faster service. The Route 27 bus line served the corridor for decades and was previously a streetcar line. It was merged in the PurpleLine branding in recent years.