Starting before the sun rises on Sunday morning, the Milwaukee County Transit System will unveil three new express routes, one entirely new route, and reconfigure a number of others. The new routes are funded in part by a federal grant and settlement with the Wisconsin Department of Transportation, both of which help fix a structural funding shortage in the system, and will include:

The new express routes will offer complementary service to existing routes, with a few exceptions for route adjustments.

Funding for the express new routes comes from a $17 million federal Congestion Mitigation and Air Quality grant that provides operating support through 2017. A prior CMAQ grant funded the Blue, Green and Red lines that began service in 2012. The new Route 61 will be funded in part by the financial settlement of the suit by the Milwaukee Inner-city Congregations Allied for Hope and Black Health Coalition of Wisconsin against the Wisconsin Department of Transportation which argued that it discriminated against minorities for spending so much money on the Zoo Interchange project and doing little for transportation of urban minority residents who depend on bus transit.

The new express routes will achieve speed gains primarily by stopping once every quarter mile where there is no underlying service (such as the western end of GoldLine Wisconsin – UWM Express route where Route 10 service will be eliminated), and once every half mile where there is underlying service (such as the PurpleLine with the existing Route 27). Today’s bus service generally stops once every two blocks or eighth of a mile. 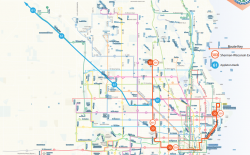 The 30X will add express service to the most heavily used route in the MCTS system. Route 30 currently has an annual ridership of 4,195,000 with branches on each end of the route (Downer/Maryland on the east, Florist/Keefe on the west). The new service will run on the existing Route 30 route, but only serve the N. Maryland Ave. branch on the east end of the route and the N. Sherman Blvd. – W. Florist Ave. branch on the west end.

The new express service will run every day but Sunday with service from 6 a.m. until 9 p.m. on weekdays, and 11 a.m. to 8 p.m. on Saturdays. Rush hour service will be every 15 minutes, with off-peak headways of 20-30 minutes. The combined frequency of the 30 and 30X will lead to service every ten to 11 minutes on weekdays and 12 to 15 minutes on weekends.

The existing Route 30 will continue to operate under the proposed changes, with service everyday from 5 a.m. until 2 a.m. It will, however, eliminate the N. Downer Ave. branch (to be served by Route 21 and GoldLine) and the Keefe Ave. branch.

According to MCTS, the “changes will improve efficiency by providing more service where the demand is the highest.”

The MetroEXpress GoldLine is proposed to serve Downtown, the Regional Medical Center, Marquette University, UWM and Brookfield Square Mall. It will primarily run in the footprint of Route 10, which will be retired as a route number. The express route isn’t the only route that will replace Route 10, though, as Route 14 will be extended from Downtown to Bayshore Town Center on the current footprint of Route 10. Route 14 currently terminates at the Downtown Transit Center, which might be redeveloped into The Couture. Route 10 today provides 1,832,000 annual rides. West of N. 35th Street, the route will continue on W. Wisconsin Ave in the footprint of today’s 10, but riders could potentially have to walk further to stops. The new stops will be spaced every quarter mile instead of every eighth mile. This change is intended to speed up service in the corridor.

The new express route will run to the east end of Wisconsin Ave. following N. Prospect Ave. north until it becomes a one-way street at E. Ogden Ave. From there it will follow the Route 30 route to UWM, taking the N. Downer Ave. branch of the service. During this stretch it would overlap the expanded Route 14 and the existing Route 30 (which will have its N. Downer Ave. leg eliminated).

The new service will run seven days a week, from 5:30 a.m. until 2 a.m. Weekday service will have buses arriving every 12 to 16 minutes, with Saturday having buses every 17-20 minutes and Sunday 22 to 27 minutes.

This new express route is easily the most straight forward of the proposed express routes and also the straightest route. Running from nearly the northern county line to the southern, it will run entirely within the footprint of the existing Route 27. Route 27, the second highest trafficked in the system with 3,686,000 annual rides, will continue to operate with a slightly reduced schedule as new service is added via the express route. The Route 27 will continue to serve the Glendale Business Park at the north end of the route and the extension over to 35th Street on the south end, while the new route will run only straight north and south on 27th Street.

The new service will run seven days a week from 5:00 a.m. until 1 a.m., with weekday frequencies between 20 and 25 minutes and weekend frequencies of 25-30 minutes. Route 27 will operate with the same frequency as the PurpleLine, but with offset times. This will lead to service at shared stops every nine to 11 minutes on weekdays, 13 to 15 minutes on Saturdays and 15 to 17 minutes on Sundays. This arrangement is very similar to today’s BlueLine and Route 23, which overlap for almost all of their routes.

This will connect Milwaukee’s northwest side to Germantown. Route 61 will go from the intersection of N. 35th St. and W. Capitol Dr. to W. Appleton Ave. and W. County Line Rd., with shift-timed routes extending to Germantown. The new route will also provide service on a W. Keefe Ave. branch (W. Keefe from N. 35th St. to N. 67th St.)

The new route is made possible by funding from the Zoo Interchange settlement. Route 61 will run from 5:30 am. until 12:30 a.m. seven days a week, with service every 27 minutes on weekdays and Saturdays and 35 minutes on Sundays.

I previously reported that a new route was anticipated to run between the Keefe branch and UWM. 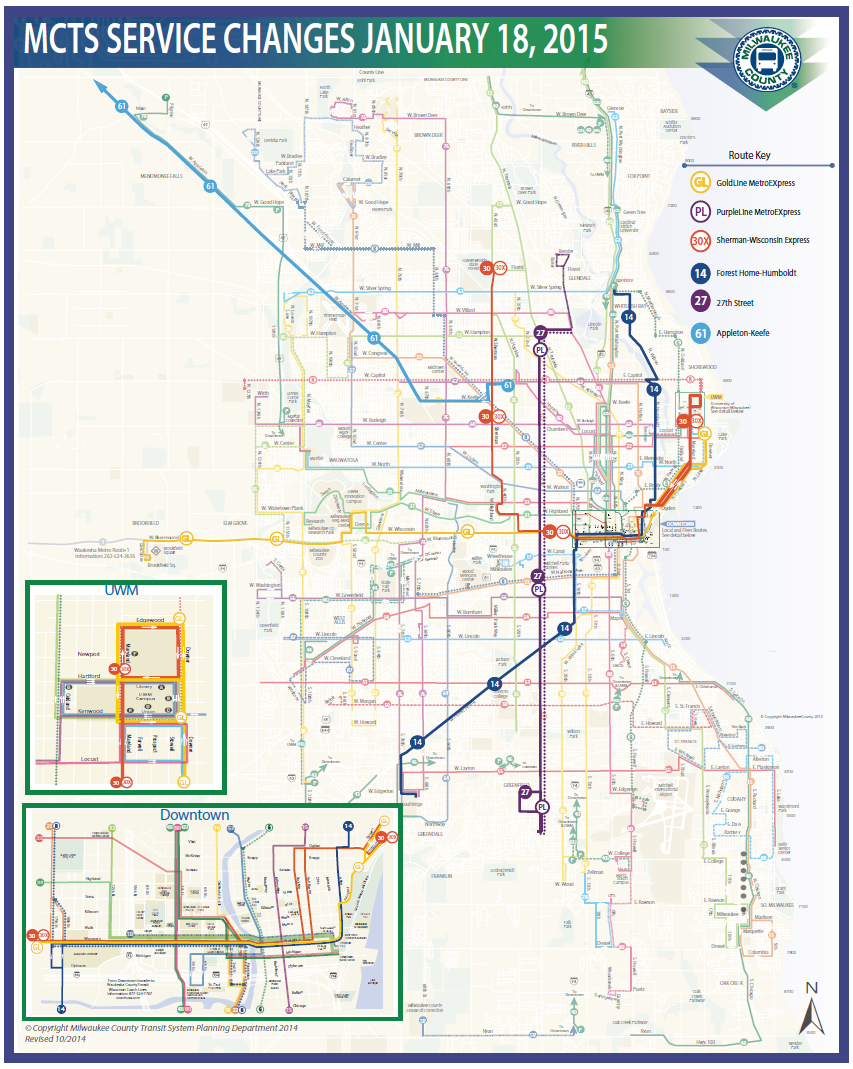 These routes are made possible by a grant MCTS received in March, but it’s not all good news. The grant comes the federal CMAQ grant program, which has funded a number of things in the Milwaukee area from streetscaping on Wisconsin Ave to new bus purchases. The most recent grant will fund service on the new routes for three years, but was needed as a way to avoid potential service cuts caused by a ten percent reduction in state operating support.

This is a continuing issue for Milwaukee County. MCTS has been using a CMAQ grant to fund new express service since 2012 to avoid service cuts, but that grant expires at the end of this year. The state aid cuts came in the first budget passed by Governor Scott Walker in 2011 and weren’t restored in the latest budget, despite a budget surplus. In 2013, state aid made up 43 percent of the transit system’s operating budget.

The previous federal grant funded the creation and operation of the Blue, Green and Red lines which serve corridors formerly served by the 15, 23, and 62 routes (all of those routes continue to exist with modifications). Those routes appear to have been a success, although they’re clearly less about express service and more about a creative way to avoid a service reduction.

How many more times can Milwaukee County pull off a short-term trick to avoid a long-term funding problem?

The system still needs to find a sustainable funding source. While CMAQ grants have enabled the system to avoid serious service cuts, they’re just kicking the can down the road. Meanwhile, fares have been raised 67 percent since 2000 ($1.35 to $2.25) and ridership has fallen 29 percent (58 million rides in 2000, 37 million rides in 2012). Will legislators pull the system out of what appears to be a death spiral?