Absentee ballots won’t be mailed until Sept. 17, but the Milwaukee Election Commission is getting ready to receive them back from voters.

A SafeVote drop box, complete with around-the-clock video monitoring, was installed outside Milwaukee City Hall on Thursday morning. The box is one of 15 that will be installed across the city, including one at each of the city’s 13 libraries.

The boxes, which are not staffed, but are secured, will be available for voters to deposit ballots in. Ballots will be picked up daily to begin with and then more frequently as volumes increase.

“Absentee voting, whether it’s by mail or through these drop boxes, is the safest way to vote,” said Mayor Tom Barrett at a press conference. “It is imperative for the city to provide easily accessible and secure ways for individuals to return ballots.” The boxes, funded by a federal grant, are intended to address uncertainty regarding timing and reliability of returning a ballot by mail. All ballots must be received by the city by the close of polls on election day, Nov. 3 at 8:00 p.m.

Voters can monitor the return status of their ballot on the My Vote WI website. Barrett said the information would be available 24 hours after a ballot is dropped off.

“There is a chain of custody,” said Milwaukee Election Commission executive director Claire Woodall-Vogg in briefly describing anti-tampering measures used to ensure ballot integrity. Each absentee ballot will be processed at the city’s central count facility on election day.

Get a daily rundown of the top stories on Urban Milwaukee
What happens if someone does damage or steal one of the boxes? “We can always reissue a ballot,” said Woodall-Vogg. That would include voiding the first ballot in city records and issuing a new one. “It would be a felony to tamper with any ballots.”

The 24-hour drop boxes don’t supplant the in-person assistance the city has provided absentee voters in the April and August pandemic-impacted elections. Voters with questions, or those needing witness signatures, can go to any Milwaukee Public Library, Tuesday through Saturday from 10 a.m. to 4 p.m. through Oct. 14. “We are excited to expand our role in democracy,” said MPL director-appointee Joan Johnson

The city’s early voting sites will be allowed to open under state law on Oct. 20 and voters can get information and cast their ballot at 18 sites across the city, including Fiserv Forum and Miller Park.

With both early voting and absentee drop off, voters do not need to go to a specific location. Voters casting a ballot in-person on election day will need to go to their assigned polling place. Woodall-Vogg said the city has currently secured a minimum of 171 sites.

Voters can request an absentee ballot up until the Thursday before the election. “That’s not a realistic deadline,” said Woodall-Vogg, encouraging voters not to wait. A request can be made online at the My Vote WI website.

Over 1,100 new poll workers have applied to join the city’s existing poll worker roster. Woodall-Vogg said the city would need a staff of 2,400 to support the neighborhood polling sites and central count facility. She characterized the response as “phenomenal.” Two weeks ago she said the city needed to recruit an additional $750. The job pays $230 for a full-day shift.

In addition to the library sites, the drop boxes can be found at the Milwaukee Election Commission warehouse at 1901 S. Kinnickinnic Ave. and the Zeidler Municipal Building’s western entrance on N. Market Street (just east of City Hall at 200 E. Wells St.). 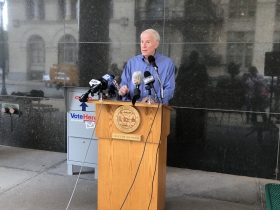 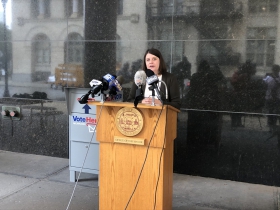 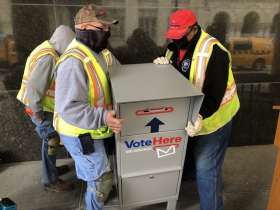 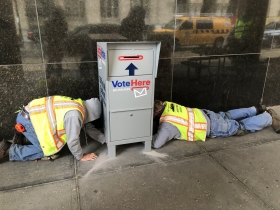 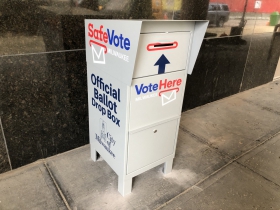