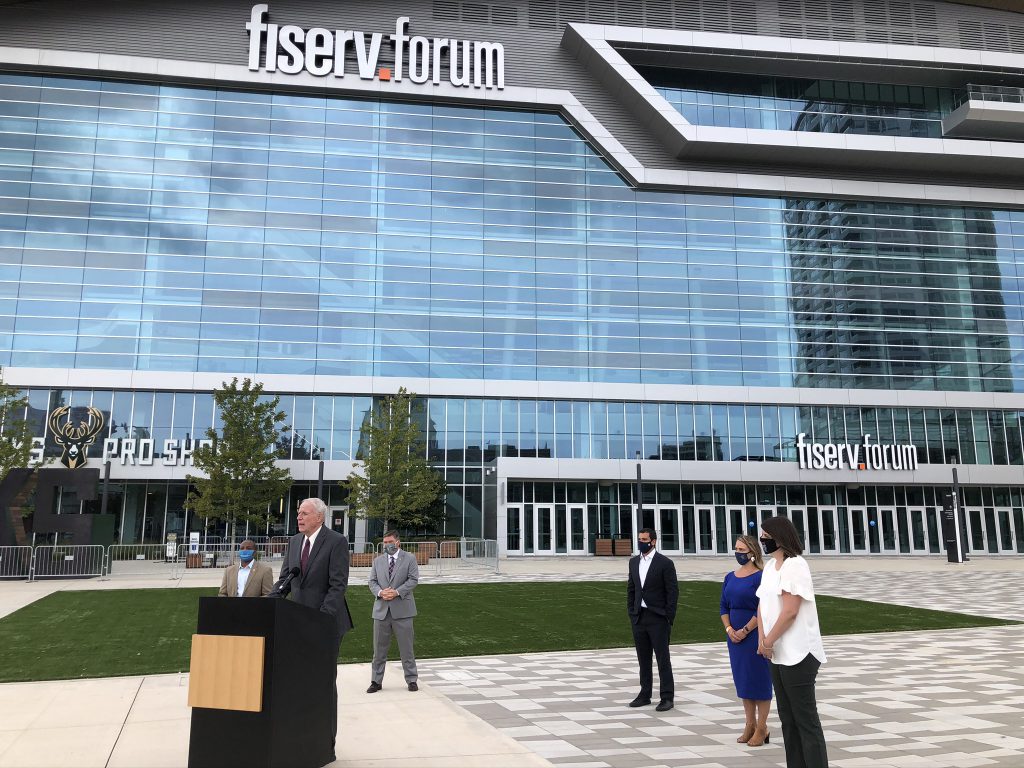 You can’t cheer on the Milwaukee Bucks or Milwaukee Brewers at Miller Park or Fiserv Forum, but you will be able to vote at each of the stadiums.

Miller Park and its dozens of acres of surface parking lots will serve as a drive-through polling place, while Fiserv Forum will accommodate indoor voting and better transit access.

The sites will augment 16 sites already approved by the Common Council for use as early voting locations.

“Because of the COVID challenges, it has become more difficult for people to vote in an ordinary way,” said Mayor Tom Barrett at a press conference Monday morning held outside Fiserv Forum.

He said the April election showed high-demand for drive-through voting. “Some voters waited for hours in line,” said Barrett.

Milwaukee Election Commission Executive Director Claire Woodall-Vogg said Miller Park’s large parking lots will allow voters to more easily queue at different points in the process, instead of having bottlenecks and a line that snaked through Downtown.

Barrett said Fiserv Forum is well-suited to play a role as a transit-accessible, centrally-located polling place. He said the city observed different voting patterns in the August primary, including a surge at the larger site at Midtown Center. The Milwaukee Bucks first offered the publicly-financed arena as a polling place on July 1st. Following the Bucks’ led strike last week every NBA team offered its arena as a polling place. “It’s something we are really proud of,” said Bucks senior vice president Alex Lasry of the team’s commitment.

The Bucks are also making a commitment that could bolster the city’s election workforce. Lasry said the team is offering vacation days to any employee that wants to work the polls and is encouraging them to do so.

Woodall-Vogg said the city still needs an additional 750 workers for the November 3rd election day to be able to fully staff approximately 180 polling places. The city currently has confirmed 170 polling places. “I am working to get that number back up to our normal 180,” said Woodall-Vogg. The city pays poll workers approximately $130 for a full-day shift plus a $100 pandemic bonus funded by a federal grant. Individuals looking to become poll workers can learn more at the election commission website.

“Voting is sacred. It is the most important thing we as citizens do in a democracy,” said Common Council President Cavalier Johnson. He’s sponsoring a resolution that the council is scheduled to vote on Tuesday that would amend the city’s early voting locations.

The Milwaukee Common Council held an emergency, 11:30 p.m. meeting on June 11th, with little explanation, to approve the city’s list of polling places in accordance with a state statute. The council had not voted to approve the early voting locations in the past decade, according to a search of city records.

Is a legal challenge forthcoming? “I hope not,” said Woodall-Vogg.

Woodall-Vogg and Barrett said the decision to add additional polling places was based on the pandemic. “It is our belief that COVID requires flexibility and safety,” said the executive director. She said Madison had also expanded its list of early voting sites after first publishing a list. “In 2018 we didn’t announce our early voting sites until about this time, same in 2016.”

Absentee ballots will be mailed starting September 17th to the more than 85,000 registered voters in Milwaukee who have already requested one. An absentee ballot request can be made through the state’s My Vote WI website.

The early voting sites will also serve as drop sites for absentee ballots. Staff at the sites will be able to review the ballots, including providing a necessary witness signature. Woodall-Vogg said the city had a three percent rejection in the April election for by-mail, absentee ballots that didn’t have the necessary witness signature or other faults.