Crisis makes Labor Day 2020 like no other, experts at roundtable discussion say.

By Erik Gunn, Wisconsin Examiner - Sep 7th, 2020 02:10 pm
Get a daily rundown of the top stories on Urban Milwaukee 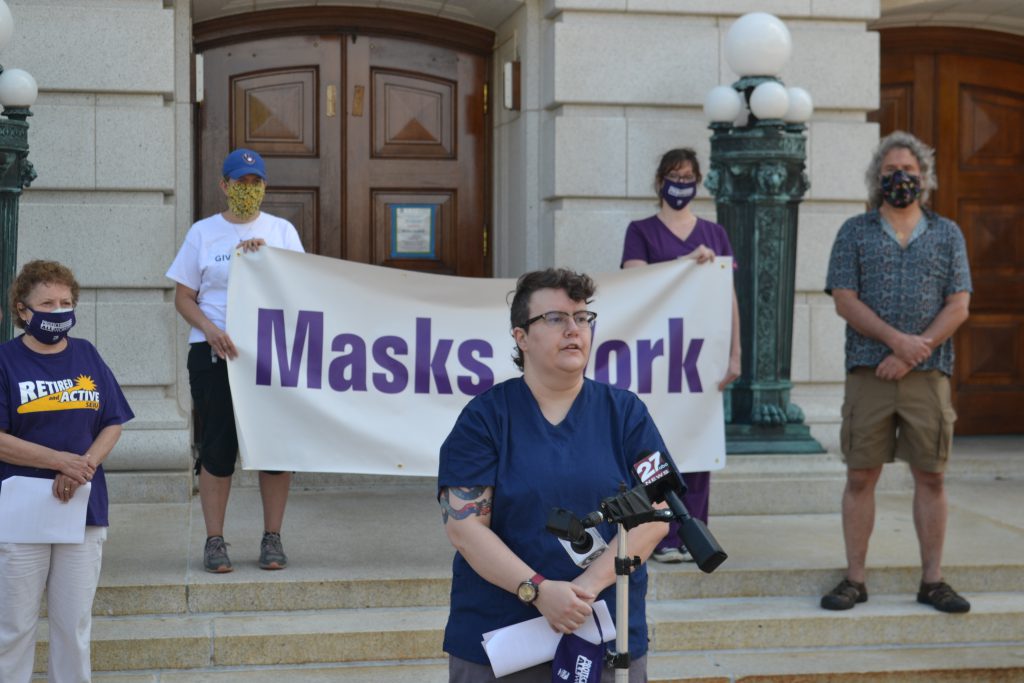 Anthony Steward is a cook at Milwaukee’s Fiserv Forum basketball arena and the father of two. He was laid off in the spring when the COVID-19 pandemic hit. At the end of July his unemployment compensation was cut down to one-third the amount it had been. Now, he says, he looks for ways “to keep my family afloat” until his regular job returns.

For Wisconsin workers, the pandemic makes Labor Day 2020 like no other.

“Work has changed in dramatic and fundamental ways for many, many people,” says Laura Dresser, associate director of COWS, a University of Wisconsin-based economic research center. “But one of the things that we continue to observe that is that it has changed in ways that were entirely predictable — because of the way work was before COVID.”

The pre-COVID economy was marked by economic inequality; by a large tier of workers with low wages and meager benefits in front-line jobs from food service to healthcare; and by increasingly weak protections and diminished bargaining power for a broad swath of the workforce.

“All that’s become more evident in this entirely new economy,” Dresser continues. “So in some ways, we say everything’s new. But in some ways, it’s really new in ways that we have experienced and seen.”

Dresser, Steward and a handful of other people took part in a roundtable discussion conducted over the internet and streamed live on Facebook a few days before Labor Day — “the one day,” Dresser observes, “we remember to celebrate workers, in this nation that in so many ways does not celebrate workers.”

The discussion was organized by COWS, which focuses its research and analysis on how the economy helps working people — or doesn’t. It built on themes that COWS presented in July, in its annual State of Working Wisconsin report. It was co-hosted by MASH: the Milwaukee Area Service and Hospitality union, whose members include employees at the Fiserv Forum.

“The first is simply the survival of working people — when you lose your paycheck, and then when support gets cut,” Rosen says. “And secondly, the survival of the American economy: When workers lose their incomes, they cut back on their spending, on rent, on car loans, on grocery store visits, and barber shop visits, and that contracts the entire economy.”

Since then, some jobs have come back. Steward recently got called back for “a small event” at the Fiserv Forum. Work rules were different, with everyone required to stay at least six feet apart, “but I felt happy being back to work,” he says. It was only  one call back, but  he hopes for more.

Work is scarce, Steward says. He relied heavily on the weekly $600 unemployment supplement he received through the federal CARES Act that was signed in late March, but that ended in July. With it gone, “I went down from $900 to $300 a week,” Steward says. “I’m relying on odd jobs to make it work.”

The hospitality industry in general “is coming back very slowly,” Dresser says. While Wisconsin’s unemployment rate in July — 7% — was half the peak it reached in April at 14.1%, it’s still twice the pre-pandemic rate of  3.5% in February.

According to Rosen, the one-time, $1,200 stimulus check that went to many households under the CARES Act, the Paycheck Protection Program funds that helped some businesses continue to pay workers, as well as the $600 weekly jobless pay supplement were critical to keeping  people out of poverty.

Without them, “the poverty level would have surged to 16.3%,” Rosen says. “It didn’t, because we put the money in people’s pockets. And particularly when working people have income, they spend it — unlike when you give tax breaks to very wealthy people or corporations.”

The end of the $600 supplement has taken $19 billion a week out of the economy, he continues. “Without that stimulus, we will see the job growth end. And we can see the recession get deeper and broader than it currently is.”

The $300 that President Donald Trump has unilaterally directed to replace the $600 CARES checks works out to $7.50 an hour for a 40-hour work week for anyone who receives it.  “You can’t pay your bills on that,” Rosen says, “and it will be a major drag on the economy.”

It also will only last about a month, and it won’t arrive soon, because state unemployment compensation systems will need to be retooled to accommodate the substitute amount. Instead, Rosen says, the Senate — and, he contends, especially Sen. Ron Johnson (R-Wis.), who has vociferously argued against extending the original supplement — should “step up to the plate and reinstate the $600 a week.”

Working through the pandemic

Some workers have kept jobs through the pandemic, but face other issues. About 40% of COVID-19 deaths in Wisconsin have been in nursing homes, and the pandemic has brought new stresses for Tammy Kahel, a certified nursing assistant in a dementia care unit.

“On the best of days, dementia is a difficult disease for anyone to deal with. With the pandemic raging, our residents are even more isolated,” says Kahel. There have been staffing shortages, especially on the overnight shift when she works, she says, and employers have been reluctant to pay overtime — increasing each CNA’s caseload on a shift.

Residents often don’t understand the need for face coverings to help prevent the spread of the virus, “so trying to get our residents or patients to wear their masks to protect ourselves is pretty difficult,” Kahel continues. “And the pay really hasn’t increased to help offset some of that added risk.”

Kate Walton, a registered nurse, says that among longstanding problems that have been “exacerbated by this pandemic” are sick leave policies.

“In my decade in the emergency department, I can’t tell you how many times I’ve had patients come in because they worked until they dropped — literally,” says Walton. “People in food service, with GI [gastrointestinal] illness that felt they had to go to work — they knew that they were at risk of spreading those to people, and they followed every safety precaution they could, and they worked until they passed out or collapsed because they couldn’t afford to call in sick. They don’t have paid sick leave.”

Even health care workers who have some paid sick time have found themselves penalized for using it.

“For a couple of months, we got COVID sick time,” says Walton, who has been part of a hospital unionizing effort. Time off because of symptoms for the virus wasn’t logged against a worker’s quota of sick days.

“That’s gone now” — and even if workers may have sick time, Walton says, “it’s hard for us to feel like we can call in every single time we have just one of the possible symptoms that might be COVID.” The lack of adequate paid sick leave in the U.S. “has just been compounded by the pandemic.”

For the roundtable participants, three months of nearly daily demonstrations in support of Black lives and in response to the police killing of George Floyd in Minneapolis and more recently the shooting of Jacob Blake in Kenosha, leaving him paralyzed, also are affecting frontline  workers, who are disproportionately people of color.

“When I look around the city, I see that the Black community has been hit the hardest by both the pandemic and unemployment, where we were worse off to begin with,” Steward says. “Working people, no matter what color skin or where you come from, should be able to provide for ourselves and live with dignity. Black lives matter in society and on the job.”

When unions were stronger and union representation more widespread in the 1950s and ‘60s, “the racial wage gap and racial wealth gap diminished,” Rosen says. “As we’re seeing a decline in union representation among workers, we’ve seen a dramatic increase in inequality.” Making it easier for workers in lower-wage hospitality and service-industry jobs to organize is “one way to make Black lives matter, in terms of wages and compensation.”

COVID and its disproportionate impact on Black and brown communities have drawn attention to longstanding inequities.

“These are things that we can fix if we want to, frankly, and we should,” Walton says. “It’s important, especially as white people as white workers, that we stand up in solidarity with our Black and brown coworkers, with our communities — that we work together, that we have strength in numbers and that we add our voices for standing up for racial justice and to say that Black Lives Matter, for our entire community.”