200 consecutive nights of events will celebrate open housing marches of 50 years ago. 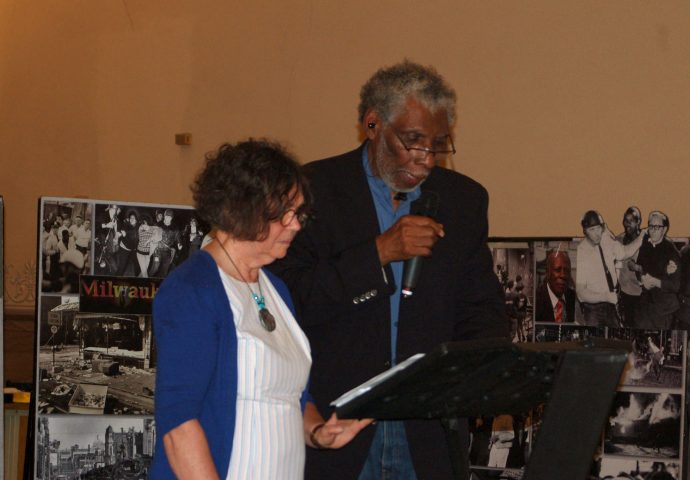 Margaret Rozga, Youth Council member and widow of James Groppi, and Fred Reed, a member of the Commandos, read a roll call of march participants who have passed away. Photo by Andrea Waxman.

Julius Coates was just 14 years old when he participated in Milwaukee’s civil rights marches in 1967 and ’68.

“I was not really knowledgeable about a whole lot of things but I did know that there were some real serious limitations as to where I could go as a person of African-American descent,” Coates said.

Coates was one of more than 300 people who filled City Hall’s ornate 20- by 70-foot atrium at the recent kickoff of 200 Nights of Freedom, an initiative featuring 200 consecutive nights of public events and programming that will reflect on, document and revive the spirit of the marches that began on Aug. 28, 1967.

Speakers including Congresswoman Gwen Moore, former Commando Prentice McKinney, event coordinators Adam Carr, Kantara Souffrant and Edward Wingard spoke of past and present injustices and the courage of the marchers. They called, as well, for reigniting the struggle against injustice. Moore confessed to sneaking out her bedroom window, as a teen, to march against her mother’s wishes.

Led by the NAACP Youth Council, its Commando unit and the Rev. James Groppi, civil rights protesters marched for 200 consecutive nights to demand an end to housing discrimination against African-Americans. The protests finally led to the passage of municipal and state fair housing legislation that was even more stringent than that passed by the federal government.

Kickoff attendee Lee Abbott, 36, learned about the marches from some of its leaders, whom he met through his involvement in a student movement. A UWM graduate student from Louisiana, Abbott, who is white, has a background in labor and student organizing.

The open housing marches resonate with him, he said, because he believes it takes movements, struggles and conflict to move society forward.

“I don’t think that people’s rights or their ability to be safe on the job or to gain the dignity that they want to have in society is just handed down to them. I think that is a product of people actually fighting,” he said. “Power concedes nothing without a demand.”

Ensuring that everyone in Milwaukee knows the stories of the courageous, mostly young African-American civil rights activists is important for many reasons, said Adam Carr, a March on Milwaukee 50th co-chair with Marquette University professor Dr. Robert Smith.

Besides the fact that the story has been largely forgotten, it is powerful because of what it tells us about where we are today, Carr said.

The story shows how a group of young people “found solidarity with each other and demonstrated against a world that was unjust to them,” Carr said, adding that it illuminates the ways that young people dissented, built a movement and made real change.

Though the events of 1967 happened more than 20 years before she was born, Maya McCarthy-Neal focused on them this summer while working with teens at Urban Underground. While studying “the revolutionary radical history of communities of color in Milwaukee,” they considered how the issues of housing discrimination and segregation have affected and are affecting Milwaukee now, she said.

As an organizer with the Young People’s Resistance Committee, McCarthy-Neal, 22, said it’s important to reflect on what went well and what didn’t go well for the marchers and to consider what can be re-used or changed and what should be discarded. “I think knowing the history is important to your skills in the present and what you’re hoping to gain in the future,” she said.

Many of those who participated in the open housing marches have since died but they were remembered at the kickoff when Fred Reed, a veteran of the NAACP Youth Commandos, and Margaret Rozga, a member of the Youth Council as a young woman, read a roll call of more than 100 names.

“I had tears come to my eyes when they had (the original marchers) stand up” during the program. said Emily Breffle, 31.

A military veteran who came here four years ago to work on food issues, Breffle, who is white, discovered the stories of the marches in her ongoing efforts to learn the civil rights history of Milwaukee, she said.

A Washington Heights resident, she purchased a vacant lot near 39th Street and Meinecke Avenue to grow food and immerse herself in the city.

While thinking about how to be a better advocate against the forces of racism and segregation and chatting with her neighbors in Metcalfe Park, Breffle said she realized that “just connecting with each other is the most powerful thing we can do. … just being willing to walk into another neighborhood and actually meet the people who live there and get to know them and call them friend.”

Kantara Souffrant, March on Milwaukee 50th education committee chair, said that the story of the open housing marches must be part of the local and national memory, because it is important to recognize “the sheer bravado of the people of this city.”

As a woman of African descent, telling the story and recognizing those who marched is a way of thanking them, Souffrant said. “I’m of Haitian ancestry and our elders and our oral history are an important part of our culture. It is in my DNA.”

Souffrant, who has a doctorate in performance studies from Northwestern University and works as an artist-scholar and educator at the Milwaukee Art Museum, explained that even though she sometimes feels hopeless, these stories embolden her.

Ed Wingard, March on Milwaukee 50th youth committee chair, learned of the marches from McKinney. He said that to see people who look like him, were his age and were in the same predicament as he is “stand up and march 200 nights and not let bricks, being spit on and hatred stop them … is uplifting.” Wingard is 20.

In Milwaukee white residents and those of color face some of the starkest racial disparities in wealth, health outcomes, educational outcomes, opportunity and access of any city in the entire country,” Carr noted. What the civil rights movement was in 1967, Black Lives Matter is today, he said.

“The marchers will tell you that they don’t want another victory lap. They don’t need another trophy,” added Carr. “What’s most important to them is that a young generation of (Milwaukee) activists … takes the reins of creating the change they want in their city.”