By Rachael Vasquez, Wisconsin Public Radio - Sep 1st, 2020 05:07 pm
Get a daily rundown of the top stories on Urban Milwaukee 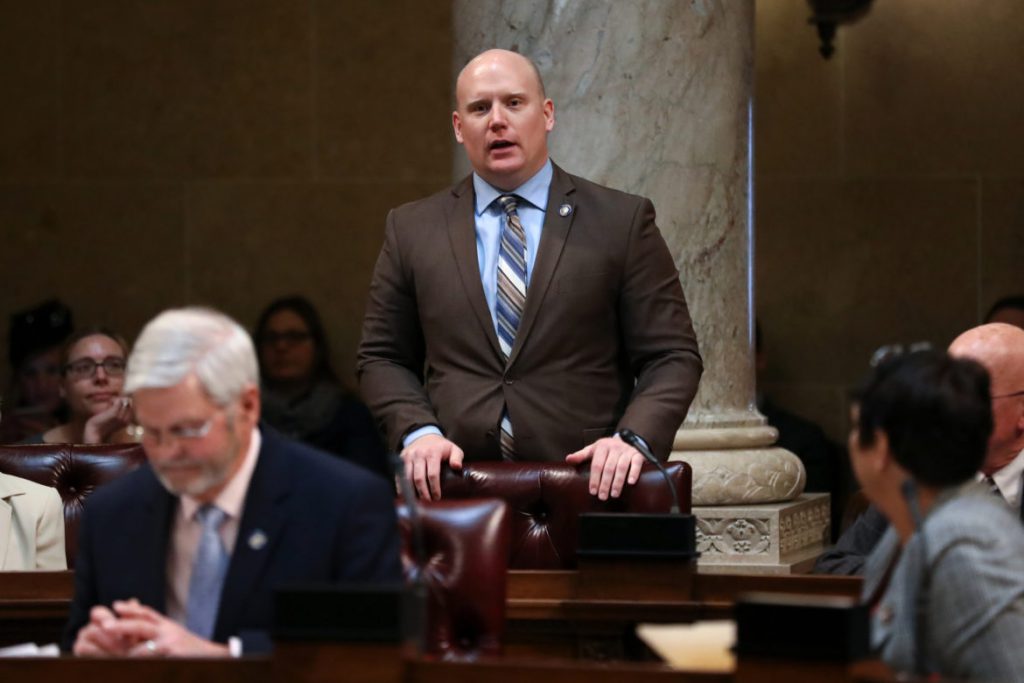 Caleb Frostman, secretary of the state Department of Workforce Development, seen here addressing the legislature on Dec. 4, 2018, at the Wisconsin State Capitol in Madison, Wis., while serving as a state senator. Coburn Dukehart/Wisconsin Watch

Caleb Frostman, secretary of the state Department of Workforce Development, estimated in an interview Tuesday that it would be about six to eight weeks before tens of thousands of unemployed workers in Wisconsin start receiving a new $300 unemployment insurance supplement created by the Trump administration.

Under that estimate, payments from the Lost Wages Assistance program would likely start going out to eligible unemployment recipients in early to mid-October, at least 10 weeks after a previous $600 supplement from Congress ended on July 25 in Wisconsin.

For the majority of that time, the department will be setting up the infrastructure for the new benefit, a process known as “programming,” Frostman said.

“That means adjusting our IT mainframe system, which is about 50 years old, to accept and process the new requirements for this new Lost Wages Assistance program,” he said. “It’s going to be about four to five weeks of actual programming where our IT professionals work closely with our (unemployment insurance) staff to make sure they have all the proper understanding of the law … And then we usually spend at least … two weeks of testing to make sure that the programming performs as it’s expected.”

The agency also confirmed Tuesday it has now applied for funding to cover four weeks of the $300 supplement, according to an email from DWD communications director Ben Jedd. That means that if the state’s application is approved, eligible unemployment recipients could get as much as $1200. When states initially apply and are approved for the program, FEMA sets aside funding to cover three weeks of the $300 supplement, so some activists had expected to only see $900 from the program.

Gov. Tony Evers applied for the federal funds last Friday. As of Tuesday afternoon, FEMA had not approved Wisconsin’s application.

Ashley Green, co-founder of the advocacy organization Wisconsin Unemployment Action Group, said the wait will be “devastating” for people who are currently only receiving state-level unemployment benefits, which max out at $370 a week.

“We got bills, some people have kids that they have to feed,” Green said. “They don’t have jobs that they can reliably go back to.”

The speed with which DWD has set up, and started paying out, benefits under other unemployment programs created during the pandemic has been a source of frustration for many in Wisconsin. Under the federal CARES Act, three new programs were created to ease some of the economic pain brought on by the COVID-19 outbreak, and President Trump signed all of them into law with the rest of the stimulus on March 27.

The Federal Pandemic Unemployment Compensation (FPUC) program, the $600 supplement to unemployment benefits that ended in late July, was the most similar to the Trump administration’s LWA program. DWD began programming FPUC on April 6, and started disbursing payments a little more than three weeks later.

Frostman said FPUC, and other programs created by Congress, were “fairly straightforward,” but he notes that the difference between those and the new supplement from the Trump administration is that “there were a lot more questions than answers” about how the program would work initially.

The department says it started work on a program to provide unemployment benefits to those not typically eligible, like people that are self-employed and independent contractors, known as Pandemic Unemployment Assistance (PUA), on April 7. DWD began accepting applications for the program two weeks later, but it didn’t begin issuing payments until late May.

The third program created under the CARES Act, Pandemic Emergency Unemployment Compensation (PEUC), provides unemployed workers who’ve exhausted their benefits with an additional 13 weeks of benefits. DWD did not start programming that benefit until late May, and it only started accepting applications for the program about a month later.

Frostman said part of the reason why there was a long wait with earlier programs was because the agency’s computer system won’t allow two separate benefits to be programmed at the same time.

Green said those explanations don’t count for much in her eyes, adding that DWD has moved at a “snails pace” during the pandemic.

“They don’t operate with a sense of urgency,” she said.