A City Divided Gets a National Spotlight

Kenosha was already divided. Then Trump started tweeting about it.

By Ruth Conniff, Wisconsin Examiner - Sep 1st, 2020 10:33 am
Get a daily rundown of the top stories on Urban Milwaukee 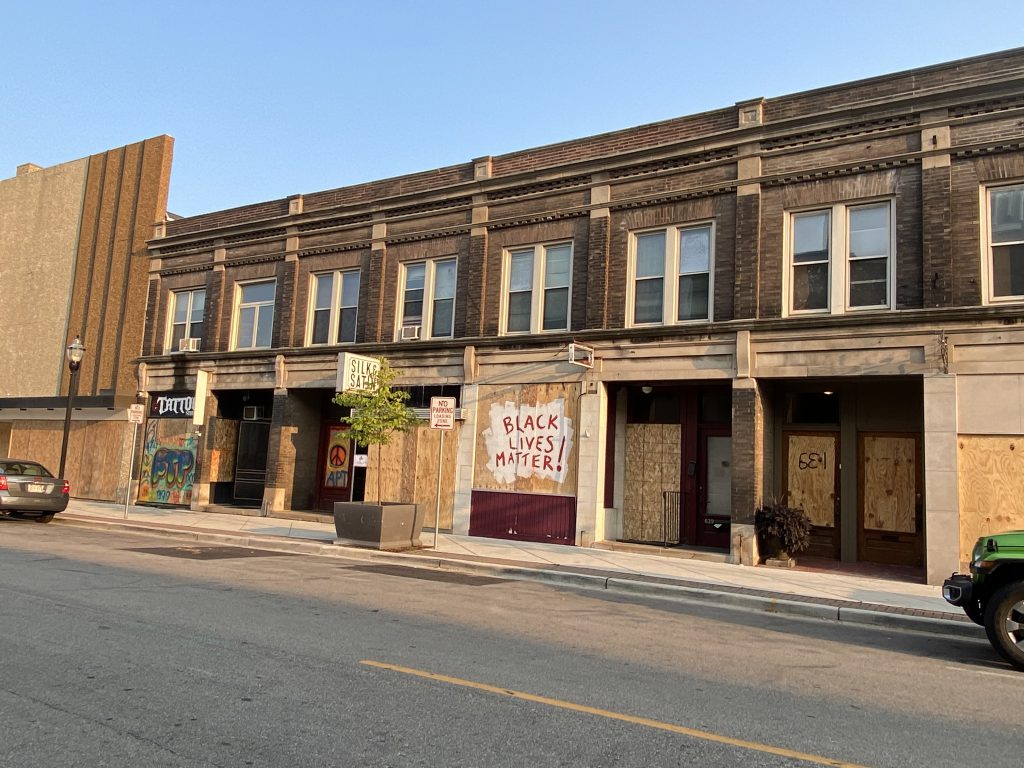 Rebuffing requests by Gov. Tony Evers and Mayor John Antaramian that he stay away, President Donald Trump will be arriving in Kenosha on Tuesday.

Trump is planning to meet with law enforcement and survey the damage to the downtown after a week of protests of the police shooting of Jacob Blake, a Black Kenosha resident who is hospitalized after police shot him in the back seven times in front of his children as he was trying to get into his car. Trump is not planning to meet with the Blake family.

Kenosha residents are bracing for Trump’s arrival, especially after the shooting of three protesters last week by a young Trump supporter and Blue Lives Matter enthusiast which resulted in two deaths.

Over the weekend, the president took to Twitter to call protesters who marched on Washington to protest police violence “agitators and thugs,” and to praise as “GREAT PATRIOTS” his supporters who descended on Portland on Saturday, driving into groups of protesters with a pickup truck and shooting people with tear gas and paint balls, in a confrontation that ended with one person shot to death on Saturday night.

“Trump is coming to a town that is at a crossroads and I know he wants to use this to show the destruction of local businesses to further his agenda,” says Kate Beckman, a Kenosha native who moved home recently after going away to college and starting her career on the East Coast. “It’s wrong to further the divisions and use this to advance his campaign.”

Noting that Trump won Kenosha County in 2016 by only 238 votes, Beckman says, “This upcoming election Kenosha will be a pivotal town, and I believe there are enough good people in Kenosha that will show up to vote and not play into his platform of hate.”

Trump’s slim margin here last time “shows that organizing on a local level and doing everything we can to show up will be extremely important this November,” she adds.

Kenosha County was politically divided even before the events of last week ripped the city of Kenosha apart. Bob Wirch, the longtime state senator from the area is a pro-labor Democrat first elected to the Assembly in 1992 from this one-time union bastion. But the Congressional district that includes Kenosha was represented for 20 years by former Republican Speaker of the House Paul Ryan, who was replaced by Ryan’s former aide Bryan Steil.

Steil told Fox News, “I think it’s a positive thing that the president of the United States is coming to our community of Kenosha, Wis. He’s going to talk firsthand to law enforcement officers, to those who’ve been on the frontlines, and say thank you to those men and women who serve and protect our community and reestablish public safety in the community of Kenosha.”

Steil described violence against the police, and said his constituents are terrified for their safety because of Black Lives Matter protesters. “We saw officers hit in the head with a brick. I talked to one officer who said he had a toaster thrown at him. We saw water bottles — all sorts of horrific incidents play out on live TV against the men and women who are trying to reestablish safety in our community.”

Comments on a Kenosha News story quoting critics of Trump’s tweet that “there would be no Kenosha” if he had not insisted on sending in the National Guard, headlined “Trump’s tweet doesn’t sit well in Kenosha a day before president’s arrival,” leaned heavily pro-Trump.

“The so-called ‘leadership’ in Kenosha let the city burn. Pictures this weekend show the mayor with hands in pockets watching everyone else clean up. These clowns should just shake the President’s hand, say thank you and shut the hell up,” one commenter wrote.

“I was thinking to myself, since he seems to always want our attention, maybe it would be best to ignore him,” says Bill Gregory, a Kenosha resident who has been going to the protests every day since they began last week. “Then I questioned whether it was because I was just exhausted.”

In the end, Gregory decided to come out to protest Trump, even though in the back of his mind he is worried there might be violence against protesters by “people who are dropped in to create chaos.”

Ellen Ferwerda, who works as a contact tracer and caregiver and owns a shop in downtown Kenosha, where she collects and refinishes old furniture, says of Trump, “I think our mayor asked him too politely not to come.”

“It’s frustrating giving this man so much energy,” she adds. “I’m so sick of him and I’m disturbed by these people who must have been hypnotized by Fox News.”

Ferwerda says, “You can’t help but be stunned” by the destruction in downtown Kenosha. “Our landscape has changed dramatically and everyone’s been affected by it,” she adds.

She didn’t like all the flowers and hearts painted on plywood after local businesses were boarded up, and got upset with a young woman she found painting flowers on her shop.

“It seemed too ‘happy shiny people’ to me,” she says. “I want more serious expressions of displeasure and anger and sorrow.”

“I’m afraid of how people are scared and think it’s bigger than we can handle on our own and we need a big police presence in our lives,” she adds. “We don’t need a large police force. It just exacerbates the difficulties.”

As for the militia members who have come to town, “It’s new to me for people to be so bold and for people to think we want them around,” Ferwerda says. “Most people want them to take their guns and go home.”

“That Trump would call these people patriots,” she says of Kyle Rittenhouse, the Illinois teenager who is accused of shooting three protesters, two of whom died, in Kenosha, as well as those who rolled through Portland over the weekend. “That’s freaky.”

Ferwerda is considering going to a protest while the president speaks, but isn’t sure if she will make it, because she is also caring for a very sick friend.

“Whatever we do, Fox News won’t show it,” she says. “It doesn’t even matter anymore what shows up on the news, because everyone’s got an agenda.”

“It’s more important to show up to these things for our community,” she adds. “You recognize who you’re gonna be working with to rebuild and get to know each other.”