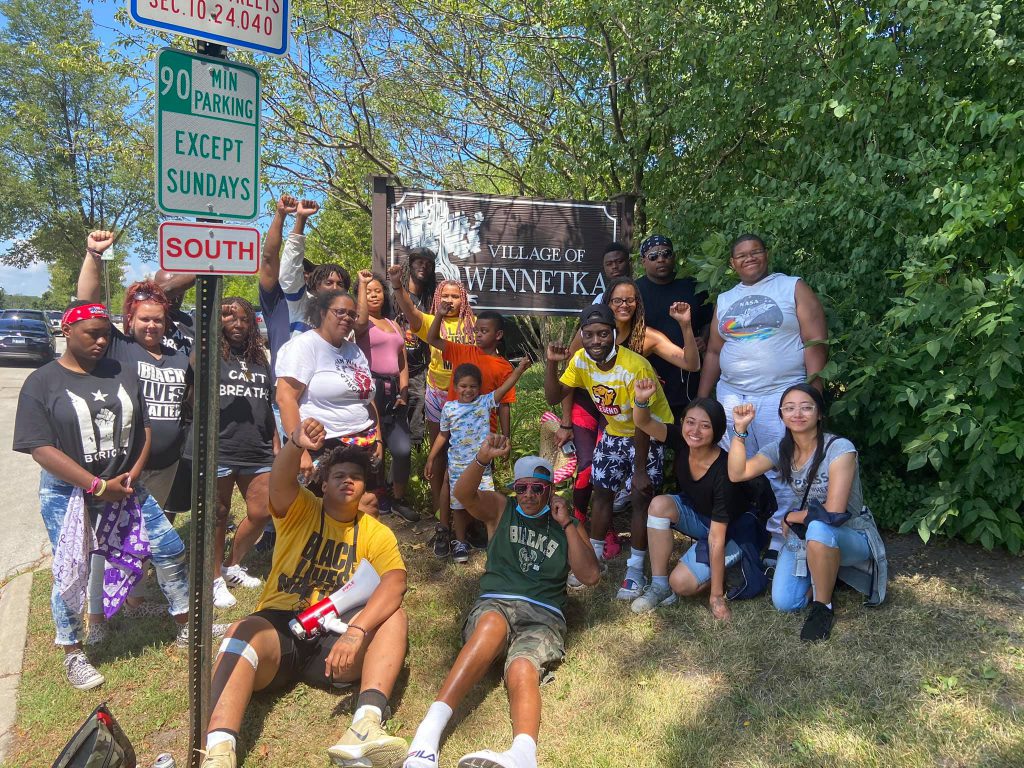 Frank Nitty originally intended to go it alone, but the community came with him.

Nitty, in late July, told Urban Milwaukee he was prepared to walk the approximately 750 miles to Washington D.C. by himself in order to arrive in the nation’s capital by August 28th, the 57th anniversary of Martin Luther King Jr.‘s March on Washington.

But Nitty, 39, was joined by fellow racial equality protest leader Tory Lowe and a couple of dozen supporters. With a car caravan in tow, they set out from Oak Creek on August 4th. People drove out to join along the way, while others had to depart because of the physical toll of the march. The group marched in shifts over the last few days to make it in time. As the marchers got close to Washington D.C. their ranks had swelled to over 50 members.

Along the way the group encountered resistance, members, including Nitty and Lowe, were arrested for blocking one lane of a four-lane highway near Warsaw, IN. They were released within a couple hours.

The group was also shot at in Schellsburg, PA, with a march member known as Cino being struck in the face with bird shot, smell pellets contained in a shotgun shell. Lowe said the group had paused to decide whether to head to a hotel for the night or climb a hill, when an individual emerged, said a racial slur, called for the group to leave and opened fire. The victim was released from the hospital and rejoined the group.

“The things we have been through just walking the route to Washington, D.C., it’s crazy,” said Lowe in a video. Nitty, who narrates his own Facebook live videos, said the group has been subject to threats and verbal assaults throughout the march. Before being arrested in Indiana he said people swerved vehicles towards the group, pointed guns at marchers, threw food and shoes at them and called them racial slurs.

But it wasn’t all negative. “We had a lot of moments where people just had like an outpouring of love that happened from all the hate we were seeing,” said Nitty during an interview with NBC News as his group came into Washington. He said those in support were people driving from Milwaukee with supplies as well as some members of law enforcement encountered along the way. “I appreciate anyone that believes in anything I say or anything we’re doing.”

Get a daily rundown of the top stories on Urban Milwaukee
On Friday Nitty was given a speaking spot during a program led by Al Sharpton on the steps of the Lincoln Memorial, the same spot where King delivered his “I Have a Dream” speech.

Nitty used his two minutes to call for lasting change, and to ask people to vote Donald Trump out of office.

“This is not a negotiation. I came here to demand change,” said Nitty. “I’m tired. Are y’all tired? Because I’m tired. My grandsons aren’t going to be marching for the same stuff my grandaddy marched for.”

“Black people shouldn’t be marching for the same stuff Martin Luther King was marching for,” he said.

“All you all that came today I know you’ve been marching in your cities,” said Nitty. “We need to get organized as a nation of activists, so we can call on each other whenever we need help.”

Lowe and Sandy Solomon, a fellow marcher, also joined Nitty in front of the rally that filled much of the National Mall. Solomon, who goes by Sandy Solo, introduced Nitty.

Nitty was not the only Wisconsinite to speak, nor were the marchers the only Milwaukee residents in attendance.

Sedan Smith, brother of Sylville Smith who was killed in 2016 in Sherman Park by a Milwaukee police officer, shared his brother’s story during a brief speech. Smith has been a regular march leader in the Milwaukee racial equality protest movement.

Maria Hamilton, mother of Dontre Hamilton who was killed in 2014 in Red Arrow Park by a Milwaukee police officer, shared her son’s story during a speech. She was joined by Milwaukee County Supervisor Sequanna Taylor.

Jose Acevedo, father of Joel Acevedo who was killed by an off-duty Milwaukee police officer in April, also spoke and called for justice.

Many of the speeches touched on Jacob Blake, who was shot seven times last week by a member of the Kenosha Police Department. Members of Blake’s family, including his father Jacob Blake Sr., spoke at the event. Blake Sr. said his father attended the 1963 March on Washington.

“There are two systems of justice in the United States. There’s a white system and there’s a Black system. The Black system ain’t doing so well,” he said.

Attorney B’Ivory LaMarr, who along with Ben Crump represents both the Blake and Acevedo families, said “this is is the last season of the police version of ‘How To Get Away with Murder’,” in a speech.

Many who have marched daily since late May on the streets of Milwaueke were present for the D.C. rally. Mariah Smith, Destiny Monae, Nino Cerda, Darius Hayes, Tiffany Henry and a couple dozen other Milwaukeeans are in the capital for the weekend. True to form, videos of them marching circulated on social media on Friday.

Also in DC for the weekend is activist Vaun Mayes, a friend of Nitty’s who joined Nitty’s march for its last day.

The 2020 March on Washington for racial justice and police reform https://cbsn.ws/2EIpz6K