I-43 to Get Diverging Diamond Interchange

Bicycle-friendly design has cars using left lane, a first for the county. 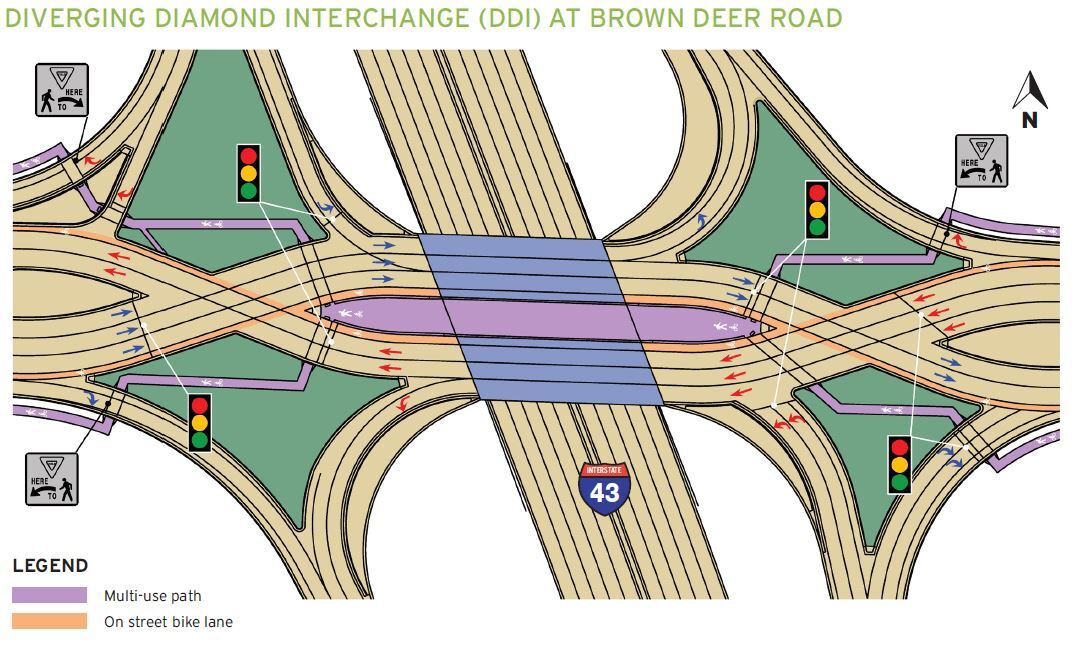 The Brown Deer Road Interchange at I-43 is Milwaukee County’s only “Cloverleaf Interchange.” It dates to the freeway’s construction in the mid-1950s, when the surrounding area was rural, and land was cheap. Currently, traffic is some 80,000 vehicles daily, leading to congestion and crashes in what is now an urban high volume interchange, with levels expected to approach 122,000 by 2040.

In April, the Federal Highway Administration allowed a project to replace the interchange to proceed to final design and construction.

And what a design it is! The Wisconsin Department of Transportation (WisDOT) has proposed the county’s first “Diverging Diamond Intersection” or DDI, to replace the obsolete cloverleaf.  According to WisDOT, “These interchanges have been shown to increase capacity and safety, decrease congestion and minimize the cost of new infrastructure.”

Also known as a “double crossover diamond,” the interchange eliminates pesky left turn issues by having traffic travel on the opposite side of the street, as if in Great Britain. Timed signals permit vehicles to cross from the right lanes to the left, and then cross back over after passing through the interchange. Driving on the left side of a two-way street in these parts has traditionally been the province of daredevils, drunks and desperadoes. With the interchange’s projected 2025 opening, it will now be available to law-abiding motorists. 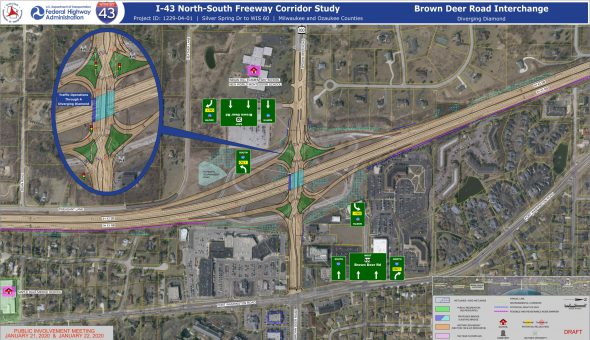 Unlike the current cloverleaf, which is hostile to all but vehicular traffic, the DDI provides considerable amenities for those traveling by other modalities. There will be dedicated bicycle lanes in the street, as well as a sidewalk, which will run in the middle of the bridge through the crossover area. It is also cheaper than traditional interchanges. An early project in 2009 in Missouri was budgeted at $10 million, but came in at $3 million. This will be the fifth such intersection in Wisconsin. The first, in Janesville, opened in 2016; another opened in Appleton in 2018, and two others are in the planning and construction stage.

Dan Sellers, the Southeast Region Communications contact for WisDOT, tells Urban Milwaukee of the cloverleaf design, “we don’t build them anymore. … This area has certainly changed a lot in the last 60 to 70 years. It’s very urban now.”

I asked if there were other intersections in the Milwaukee area that are proposed to have a diverging diamond intersection. Sellers responded,  “Not at this time. There are other DDI’s that have already been constructed in the state, such as the WIS 11 interchange with I-39 / I-90, south of Janesville. It’s been operating very well.”

The DDI will also occupy a much smaller footprint, and I asked if the redesign of the interchange will result in excess land no longer needed for freeway use that might be put to other uses. According to Sellers, “Details are still being worked out, but there could potentially be an opportunity for this – the new ramps will be closer to the freeway than the existing ramps.” The current cloverleaf interchange is immediately west of the Riverpoint Village Shopping Center in Fox Point, and immediately east of the Milwaukee County Transit System Brown Deer East Park and Ride Lot in River Hills.

The American Diverging Diamond Intersection dates to graduate study in 2000 by Gilbert Chlewicki, an engineering student at the University of Maryland who had been inventing intersections since childhood. While on a European trip he was amazed to find that a similar interchange was successfully operating in France. This amplified his interest in seeing similar interchanges being built in America. The first was built in Missouri in 2009 and there are now 99 such interchanges operating in about half of all states. Chlewicki manages a website about the DDI.

Oh, and if you can’t quite picture how this interchange will work here is a Video Animation of DDI Traffic Flow.

13 thoughts on “Plenty of Horne: I-43 to Get Diverging Diamond Interchange”