By Corri Hess, Wisconsin Public Radio - Jul 6th, 2020 06:37 pm
Get a daily rundown of the top stories on Urban Milwaukee 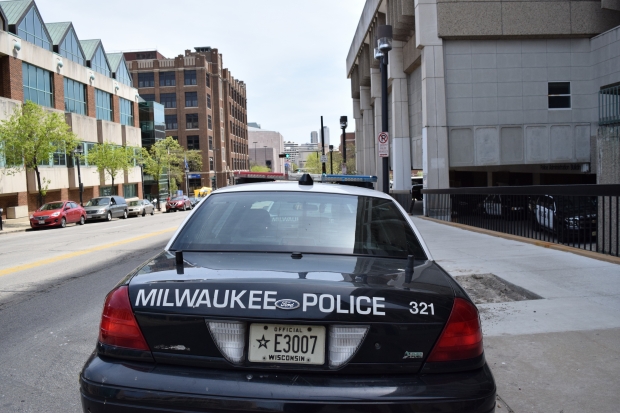 One of the photographers, LaTasha Lux, declined to be interviewed but in a series of Facebook posts said she was confronted by the officer and his female companion outside a bar at State Street and North Old World Third Street.

“These fine Americans confronted a group of peaceful protesters today by not only hurling obscenities and racial slurs, but the lady even threw a drink,” the Facebook post reads. “Myself and another photographer who was documenting the protest were physically assaulted by the male resulting in camera damages.”

Several photos were taken of the officer and the woman he was with. He was identified as MPD officer Matthew Willmann. He and his companion are white. The protester who posted on Facebook about the alleged assault is Black.

Milwaukee Police confirmed in a written statement Monday they are investigating:

“Milwaukee Police are investigating an incident involving an off-duty member that occurred on Sunday, July 5, 2020, at approximately 5:30 p.m., on the 1000 block of N. Old World 3rd Street. The off-duty member and a family member were involved in an incident with protesters. This incident is under review. There is no further information at this time.”

Nicole Muller is an attorney with Milwaukee law firm Birdsall Obear & Associates LLC. She has been hired by Lux and Sean Kafer, the second photographer. Both have been documenting the ongoing protests in Milwaukee. On Sunday, the two were photographing an LGBTQ women’s march downtown, Muller said.

Willmann’s female companion came out of a bar and threw a drink on the protesters and Kafer, telling him to stop filming, Muller said. Lux arrived and while she was taking photographs, Willmann “punched the camera into her face,” Muller said.

She called the Milwaukee Police Department, and was told the only way there would be a citation issued is if everyone — Lux and Kafer included — was given a citation, Muller said.

Kafer was given a citation for disorderly conduct, Muller said.

“We have reason to believe they will be giving a ticket to LaTasha a ticket for disorderly conduct as well,” Muller said. “But it’s unclear if the officer even received a ticket.”

Muller said she will represent both of her clients to fight their disorderly tickets – but also for justice.

“It’s a protect police culture,” she said. “We want accountability. We want justice. And we want people, when they call the officers to be believed.”

Muller said she would like to see Willmann suspended, and possibly terminated.

“As an attorney, 24-7, I’m an attorney,” Muller said. “Even when an officer is off duty, they are still an officer. The fact that we see an officer act so violently is disconcerting. This type of behavior can’t be tolerated.”

The protester said on Facebook she is worried about retaliation from the Police Department.

“Want to know something scary? This guy is an MPD officer and I just had to give my name and address to several MPD officers as they ‘investigated.’ This guy now has access to all of that.”

A Milwaukee attorney’s office confirmed Monday afternoon that they are representing the photographers who were allegedly assaulted by the officer.