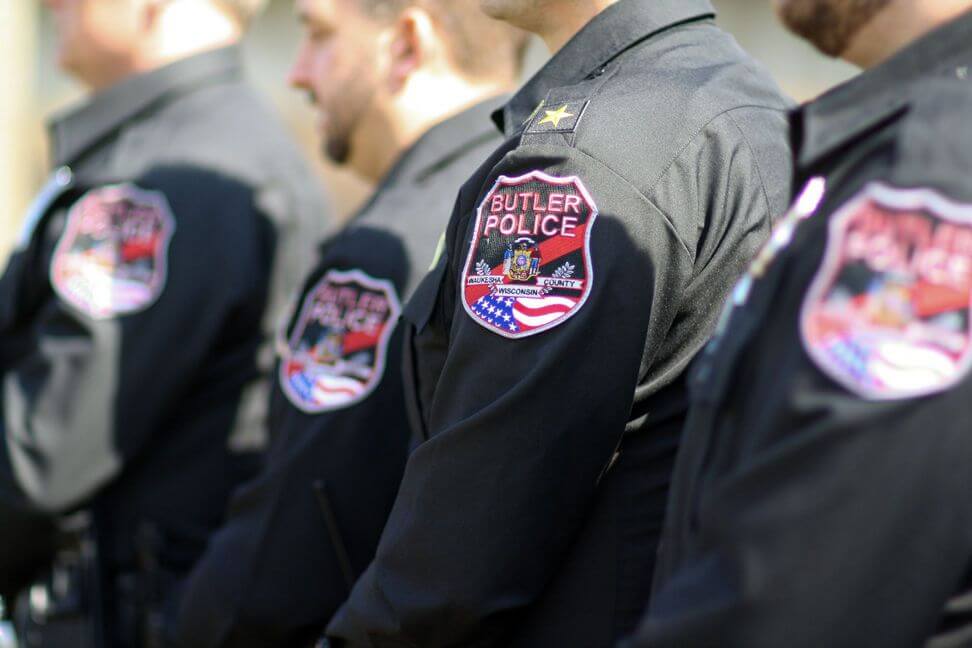 Butler police. Photo from the Village of Butler Facebook page.

As calls to defund the police have spread across the country in response to the killing of George Floyd by the Minneapolis Police Department, most of the conversation has centered around large urban centers.

In Wisconsin, activists in Madison and Milwaukee are leading the charge. Milwaukee’s Common Council has already proposed a 10% cut to the police department budget.

Part of the justification for these calls and proposals is the large proportion of the municipal budget that is spent on the police in these cities. The Milwaukee Police Department’s $297.4 million budget is about 47% of the city’s general fund.

Butler isn’t the only small town that spends a lot of money on the police and many of the other big spenders are also Milwaukee suburbs. Statewide, Butler spends the 11th most per capita on the police while Milwaukee spends the 12th most, according to the Wisconsin Policy Forum.

Ari Brown, a Wisconsin Policy Forum researcher, says police budgets do take up a lot of a municipality’s operating costs, but that it’s not that simple. Spending on education is not included in municipal budgets, so while the police might make up a large portion of the general fund, K-12 schools are typically the biggest local expenditure.

Additionally, maintaining a local police force comes with a baseline cost, so in a small town that will inflate the per capita spending.

“Just looking at what municipalities serve in their spending, once you remove things like school districts and utilities, there’s not going to be a lot of big line items for spending,” says Brown, the author of an analysis of police spending in Wisconsin. “The police budget is going to make up a large portion of the budget.”

“You have a lot of these places people would consider suburbs, very small suburbs,” he added. “Small area-wise and population-wise, a per capita metric would inflate a little bit the importance. There are certain start-up costs to starting a police department. The need for some sort of police department, it’s going to look like a lot.”

In 2020, Butler’s police budget was $1,076,649. The village’s total general fund was $2,344,100. But 93% of the police budget was to pay salaries and benefits for the department’s eight officers and one administrative assistant.

Still, Butler spends a lot more money per person than the statewide average. The Wisconsin Policy Forum report found that from 1986 to 2018, per capita municipal spending on law enforcement in the state rose from $74 to $218.

Butler Village Administrator Kayla Thorpe says that although the department’s staffing level might be high for the size of the village, it has to account for the large amount of manufacturing done there. She says nearly 10,000 people come to work in Butler every day and the police department must also respond to calls to those businesses.

Plus, some of the officers have been at the department for a long time, meaning they’re high on the pay scale for the village’s contract with the police union.

But the village also has a low amount of crime. In 2019, there were 72 reported crimes, according to Wisconsin Department of Justice data. This UCR offense number includes homicides, rapes, robberies, burglaries, assaults, arson and theft.

“Our staffing level is high but we do have quite a volume of calls for services,” she says. “We’re a manufacturing community. While our residential capita is 1,800, there’s nearly 10,000 people who come to work every day. We need to make sure we handle those calls for service. We have tenured officers who per union agreement have high costs. Our wage costs are at the max.”

Thorpe and Butler Police Chief David Wentlandt say the department has a great relationship with the community and people are happy with the services their tax dollars pay for. But that wasn’t always the case.

In the mid 2010s, the Butler Police Department and its culture created a number of scandals.

The sheriff’s office report called the department a “frat house.”

The village was forced to pay a $605,000 settlement because an officer was accused of beating up a man with disabilities during a traffic stop, court records show. Another officer was found having not completed or messed up nearly 150 police reports.

After these scandals, Wentlandt says the village’s residents considered disbanding the police department and contracting with the sheriff’s office for law enforcement services. But ultimately decided that they wanted their own police.

He says people wanted a police department that knew the names of the people in the community.

Thorpe says the village asked itself a lot of difficult questions and ultimately decided it could retain the department while fixing its culture.

“We had conversations with the community about what happened, how do we fix the issue and make sure it doesn’t happen again?” she says. “What are the expectations our community has for our police department and government as a whole?

Amid calls to defund police departments, Thorpe says she doesn’t think that will happen in Butler.

“I think if you were to ask residents, they’re very happy to have a Butler Police Department,” she says. “They value having that local department where they know the officers on a first name basis. While we’re very sympathetic to social injustices that are happening and understand the push in major cities to reinvest into community programs, I don’t think that’s going to happen here. We treat people with dignity. If that was different I’m sure we’d be having a much different conversation.”

Wentlandt says that when it comes to actually operating the police department and providing the services to residents, his budget is very small. After paying salaries and benefits he’s left with a little more than $69,000.

Of that remaining money, he says a large portion of it goes to training his officers at least 40 more hours per year than the state required minimum. He also says he believes the concerted effort to fix the department’s culture has been noticed by the community.

“I’m not embarrassed by where our budget is by any stretch of the imagination because I think it’s easily justifiable by what we do,” Wentlandt says. “I don’t think anything is way out of the realm in what we do. Salaries aren’t exorbitant, we don’t have fluff built into the budget, it’s bare bones.”

Wentlandt also doesn’t believe the community will request a major change to how the city handles public safety, but that his role is to protect and serve the people so if that’s what they wanted he’d work to make it happen.

“I would be surprised if there would be a large contingent of residents who would say they want to reduce the budget for the police department,” he says. “We have demonstrated year over year, the value we’re providing. Public safety is the number one drain on a budget. I would be surprised if people said we need to defund the police department or reduce the budget by X percent because of the value we’ve provided. But if that’s the will of the people, we work for them. We’d have to find out a way to make that happen.”

Wentlandt says he hasn’t gotten any calls or emails about the police budget and nobody has brought it up when he’s out on patrol — because the department is so small the chief needs to be on the street.

But even though he hasn’t gotten any comments, the village’s residents are often participating in the full budget process. Thorpe says she thinks people are largely happy with the services the village provides. However in the last four years there has been just one comment at the village’s public hearing on the budget, according to village meeting minutes.

Brown says that if a community wants to have a role in its local government, it needs to be involved in the budget process.

“It’s just worth people being engaged and understanding these processes,” he says. “Village of Butler [has] just under 2,000 people, general fund spending is at $2.25 million, it’s not an insignificant amount of money.”

2 thoughts on “Butler Outspends Milwaukee on Per Capita Policing”