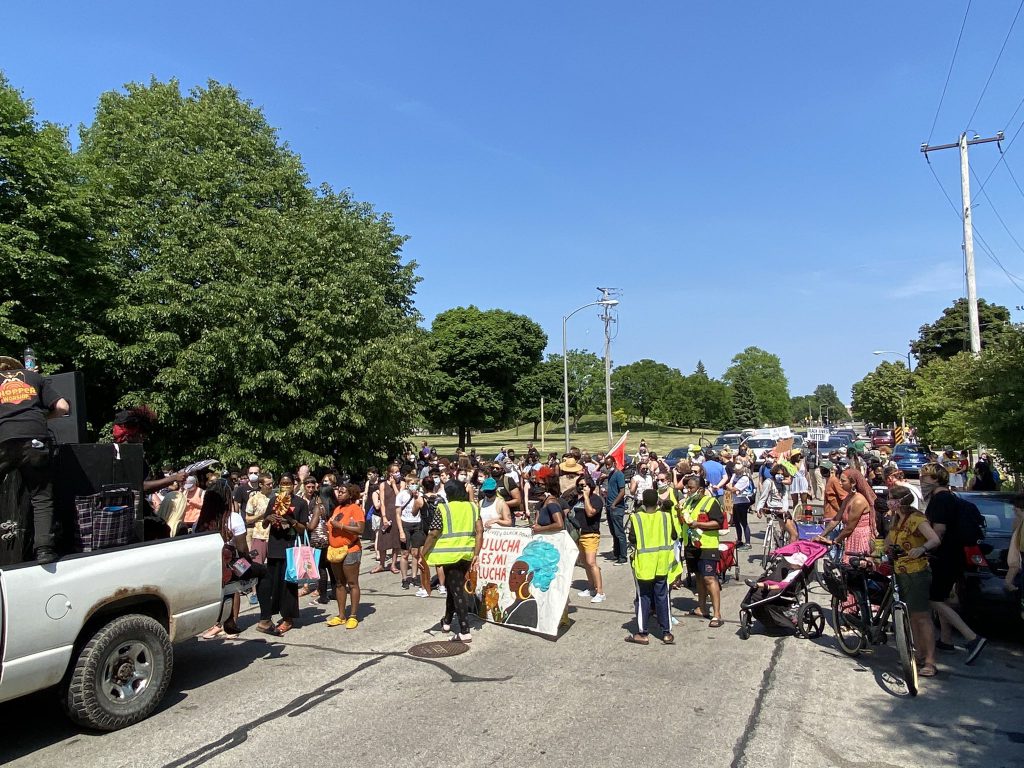 Friday, on Juneteenth, a group of organizers led a march against police brutality that was aimed at protesting against the injustices that Black women face because of racism, but also celebrating Black women.

Organizer Kamila Ahmed said that when the organisers say Black women, they mean: women, trans women, non-binary women and “any femme who feels comfortable in our space.”

Ahmed said they spent that last two weeks planning the protest. She and others had participated in previous protests against the killing of George Floyd and police brutality. They decided to organize a march “geared towards women and our emancipation,” she said.

[inarticle]The march was billed as both a protest and a Juneteenth block party. “I feel some happiness but I also feel some pain and sorrow that we have to be our here doing this still, and it’s 2020,” said Ahmed.

The march began outside the Sojourner Family Peace Center, and marched down Vel R. Phillips Ave. in honor of the late civil rights leader who passed away in 2018, then W. Brown Street to pay homage to the path taken by the first documented escapee from slavery that traveled through Wisconsin, Caroline Quarles, took on her way to the Brown family farm in Milwaukee. They then marched to Alice’s Garden, a community garden on N. 21st Street.

“Black Women, Black trans women and non-binary folks and other people got together here today, peacefully with no problems to have our voices heard and for people to understand that we are hurting and we all need to come together,” Ahmed said.

Milwaukee County Board Chairwoman Marcelia Nicholson was at the march. She told Urban Milwaukee that the march Friday was the most diverse Juneteenth celebration she’s seen in the city of Milwaukee.

“I’ve said this before, that I’ve not experienced anything like this in my lifetime,” Nicholson said. The movement for racial equality and an end to police brutality that has exploded across the world following the killing of George Floyd is reminiscent of the Civil Rights Movement, she said. “I feel like there’s real change on the horizon,” Nicholson said.

“So many others, not only in Milwaukee, but globally, are saying Black Lives Matter,” Nicholson said. “I mean that’s huge.”

For videos and more photos from the march, see our Twitter thread.