By Rob Mentzer, Wisconsin Public Radio - Jun 14th, 2020 12:55 pm
Get a daily rundown of the top stories on Urban Milwaukee 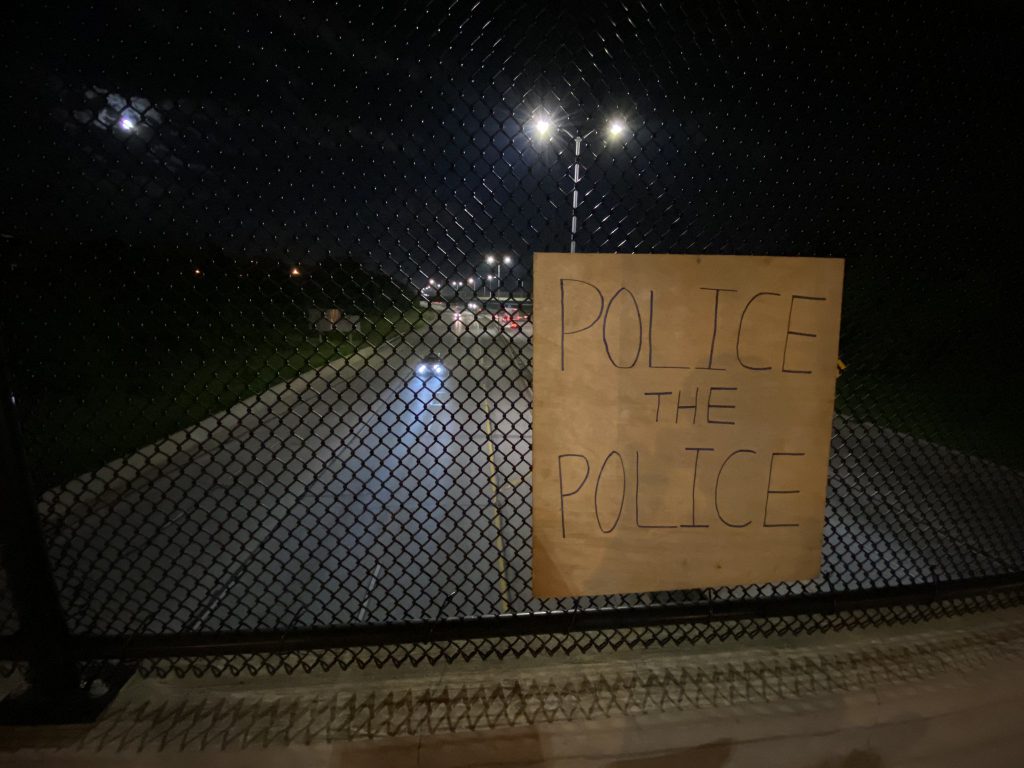 “Police the Police” sign attached to an overpass. Photo by Graham Kilmer.

The head of the state’s largest police union says his group supports a nationwide ban on chokeholds, as well as other reform measures aimed at increasing police accountability.

Jim Palmer, director of the Wisconsin Professional Police Association, said officers in Wisconsin already are taught not to use chokeholds, and he said the union supports banning the practice in law.

Amid a national wave of protests following the killing of George Floyd in Minneapolis police custody, Democrats in the U.S. House and Senate have unveiled a set of police reforms that includes a chokehold ban. It was not a chokehold that killed Floyd, but the practice has been a part of other police killings.

Palmer commented on the proposals in an appearance on “Two Bald Guys,” an online public affairs program of the Wisconsin Institute for Public Policy and Service.

Policymakers at all levels have scrambled to respond to the massive street demonstrations that have reached even small towns. In Minneapolis, the City Council has pledged to disband its Police Department, though it has not said what will replace it.

Palmer said the union also supports a proposal to create a national registry of police misconduct. That proposal drew the surprising support of conservative Republican U.S. Rep. Jim Sensenbrenner at a hearing of the House Judiciary Committee.

Sensenbrenner also singled out police unions for criticism at the hearing, saying “a lot of the police union activity that we have seen is to protect bad cops.”

Palmer on the show addressed that line of criticism.

“There is a perception that police unions protect bad apples,” he said. “I can tell you, from our experience, we don’t view our role that way. There are officers we encounter that don’t belong in the profession, and we have to be responsive to that.”

The WPPA represents more than 10,000 officers in 300 departments in Wisconsin. Milwaukee police are represented by their own union.

Another reform being widely discussed by policymakers is “defund police,” a protest slogan that has been interpreted as everything from abolition of police departments to shifting resources into social services.

Palmer and Wausau Police Chief Ben Bliven, who also appeared on the program, supported bolstering social services, mental health services and agencies other than police that can respond to those in need. But they argued that reducing funding for police departments could mean the elimination of some progressive, community-oriented programs and trainings.

And Palmer said public opinion has been on the side of police. The WPPA conducts a poll each year with St. Norbert College gauging public attitudes toward police. Its 2019 poll found that supermajorities of Wisconsinites — 86 percent of white respondents and 68 percent of nonwhite respondents — said “having a well-funded police force improves the quality of life.”

Palmer and Bliven both stopped short of supporting one key provision in the federal reform package. Repealing laws that protect officers from civil lawsuits, they said, could make it harder to recruit new officers into the profession.