Police Chief Alfonso Morales says "the media" makes it seem like they used it more than they did.

By Rob Mentzer, Wisconsin Public Radio - Jun 12th, 2020 10:46 am
Get a daily rundown of the top stories on Urban Milwaukee 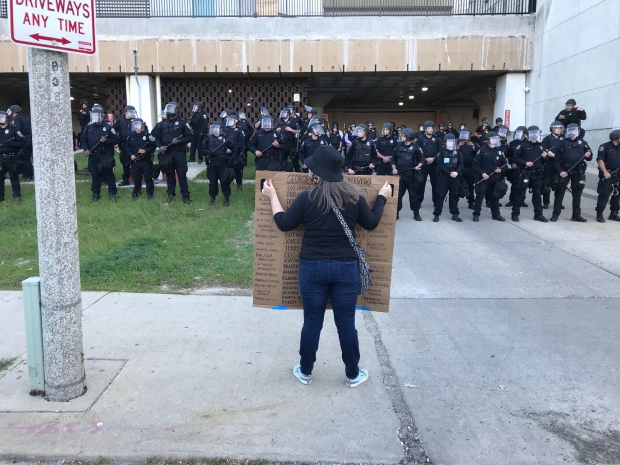 A protester holds a sign up to law enforcement gathered outside the city of Milwaukee’s Police District One building on Sunday, May 31, 2020. Madeline Fox/WPR.

Police Department leaders in Milwaukee defended their use of tear gas against protesters at a meeting Thursday night of the city’s Fire and Police Commission.

This was the first time they had appeared before the civilian oversight board since the protests began.

The civilian oversight board is considering reforms to the city’s use of force and civil unrest policies in response to daily protests that have been going on there since late May. The demonstrations are part of a nationwide wave of protests of police brutality and racial injustice. Milwaukee, which is among the nation’s most racially segregated cities, has had some of the state’s largest demonstrations.

Commissioner Everett Cocroft called it “unacceptable” for the department to have used tear gas on protesters amid the COVID-19 pandemic. Because tear gas causes coughing, watery eyes and runny noses, it could facilitate the spread of the disease among crowds.

“You’ve got to consider the health of the citizens,” Cocroft said. “There has to be a way to de-escalate and try another way to disperse crowds.”

Protests for at least the last week have been peaceful, but the nights of May 29 and May 30 especially were marked by violent clashes and rampant vandalism. A police officer was shot in the foot and another suffered a concussion.

Assistant Chief Michael Brunson said the department used tear gas because it was a non-lethal option.

“When officers are under siege, when they’re being hurt by citizens who choose to use those methods, it’s too late to try and de-escalate,” Brunson said. “We utilized the methods that would cause the least amount of injury in that situation.”

Police Chief Alfonso Morales also downplayed the department’s use of tear gas, saying it was only used a few times, and hasn’t been used since June 4.

“It’s not as many times as the media makes (it seem),” Morales said.

The commission itself has been subject to criticism. In December, a longtime member resigned in protest of leaders she said were “undermining the fundamental spirit and purpose of the city of Milwaukee’s civilian public oversight system.”

Cocroft said the commission ought to implement the “8 Can’t Wait” police reform policies that some activists have promoted during the protests. The commission didn’t take action on policy. Chair Steven DeVougas said it will take up reforms in the future.

Commissioner Ann Wilson, speaking by phone at the virtual meeting, said members of the commission, police and fire department leaders and the public need ways of communicating better with each other.

“We have to figure out a way to communicate, talk together, sit down and put all ideas together,” Wilson said.

One thought on “FPC Commissioner Blasts Tear Gas Use”