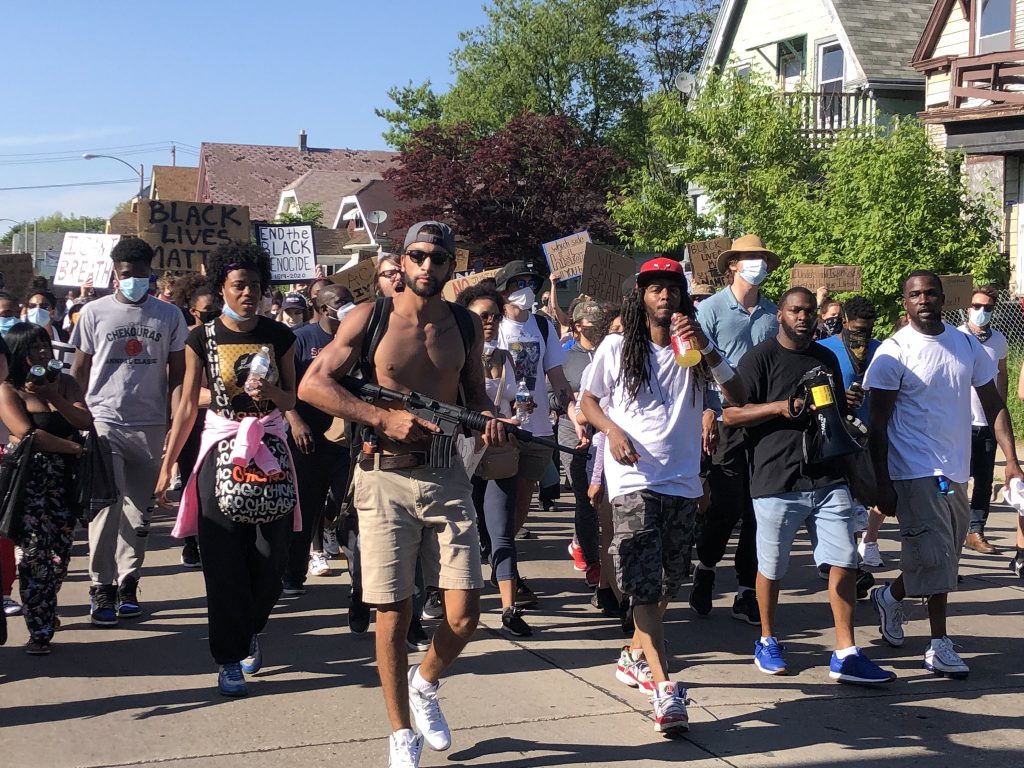 A high-profile leader arrested under confusing circumstances, tear gas and rubber bullets used on protesters without a coherent explanation, cars causing property damage at the rear of marches and now a night of completely peaceful protest marches with many politicians in tow, even though one of the march leaders believes a group of white supremacists could be trying to assassinate him.

Frank Nitty, Khalil Coleman and other organizers led a protest march through much of Wauwatosa and Milwaukee’s west side Thursday night while another march, led by Tommy Franecki and Jeremiah Thomas, looped around downtown Milwaukee.

The marches, a response to the murder of George Floyd by a Minneapolis police officer and other police-related deaths, each drew hundreds of people. It’s the second consecutive day that multiple marches have taken place simultaneously, and unlike Wednesday, the marches didn’t merge.

When Urban Milwaukee asked Franecki if they would meet up, the organizer said the two groups had different opinions on how to keep everyone safe. Another organizer said that those engaging in reckless driving could join another protest that “probably doesn’t give a damn.”

The reckless driving reference comes as organizers have struggled with cars following behind and engaging in dangerous or destructive behavior, including driving on sidewalks, lawns and speeding. Nitty left his march the night prior, calling it over, only to have dozens of cars and a dwindling number of marchers continue on and ultimately gather in Gordon Park around 1:00 a.m. with no sign of a protest message of justice.

Now two incidents with vehicles have occurred. Two police officers and an individual under arrest for obstructing traffic were struck by a vehicle at 3:07 a.m. Thursday morning by members of a car caravan, with the individual sustaining serious injuries. Thursday at 4:45 p.m. a vehicle with seven people inside either coming or going from a protest, based on signs in the car, was driving recklessly down W. Center St., far from either protest, and crashed. One individual in the vehicle died, two others were injured.

Thursday night, both marches went off without incident and featured many a positive call for justice.

Franecki’s march started at Cathedral Square Park and made a loop through surrounding neighborhoods before ending back where it started and dispersing.

Nitty’s march, which lasted almost 10 hours started at N. 27th St. and W. Center St. before heading west to Wauwatosa on W. North Ave. and back into the city on W. Center St. The group appeared poised to head to Mayfair Mall, which was barricaded, but instead went north on the Menomonee River Parkway, turning east on W. Center St.

Both marches drew considerable numbers of people standing in support as marchers passed by.

Nitty and Coleman, who lead their daily march with the support of many others including Rafael Mercado, displayed a much greater degree of organization Thursday afternoon than days prior using radios to communicate ahead, a car with a rooftop speaker system and a noticeably greater focus on controlling the speed and flow of marchers and nearby vehicles.

The Wauwatosa march also had a much greater security element. 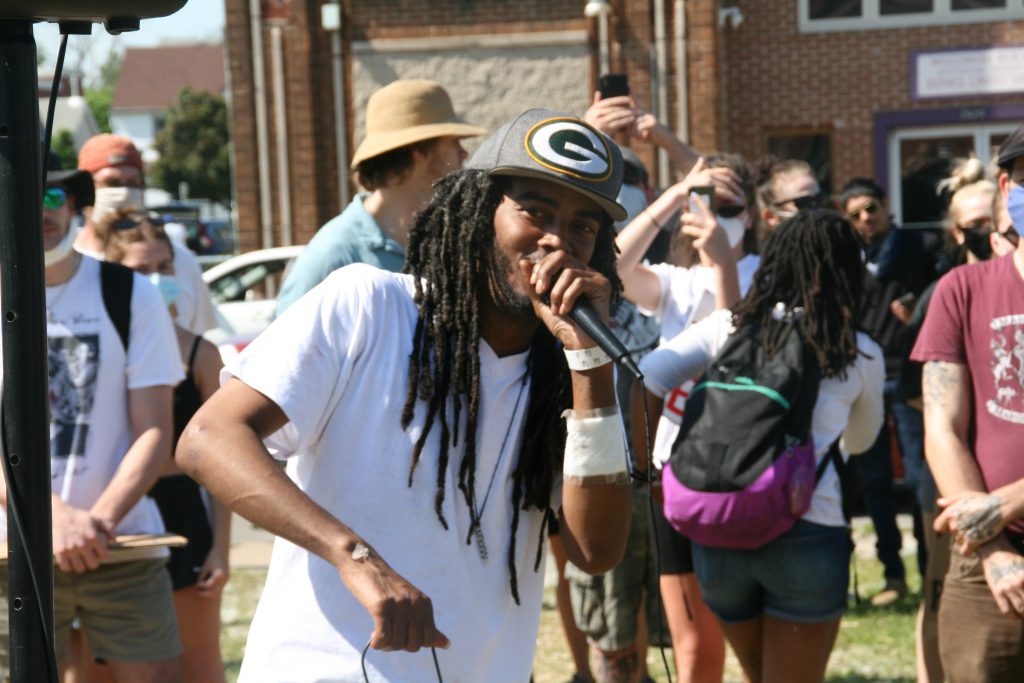 Frank Nitty speaks before a march on June 4th. Photo by Jeramey Jannene.

The latter portion of Wednesday’s march featured Nitty constantly on the move, with a group of rifle-toting men following him. One wore a flag of the “boojahideen,” a slang reference to warriors believing in boogaloo, an armed revolution to overthrow the government.

Activist Vaun Mayes initially confronted the individuals when they arrived Wednesday evening, all recorded in his live stream video, but Nitty later allowed them to be close to him.

“We gotta watch to make sure they don’t run up on me and shoot me,” said Nitty on Wednesday as the group moved further west into Riverwest. On Thursday he described the strategy as akin to one of keep your friends close, but your enemies closer.

How did he know the group might be after him?

Nitty said he received calls and messages alerting him to a possible threat. “The information just came in like boom, boom, boom,” he said in an interview Thursday. He said his security detail was focused on such things.

But it was unclear if the individuals that showed up were the same ones believed to be out to kill him. “Obviously people aren’t going to say I’m here to kill you,” said Nitty.

“There was some behavior that happened yesterday that was offputting,” he said. Nitty said the individuals were welcome at the events if they are allies, but without weapons.

Who is Nitty’s security detail? At least one member is quite visible. Andre Triplett openly carried an AR-15 rifle at the front of the march Thursday. “I’ve got to protect my man over here,” said Tripplet, in an interview, about why he brought the gun.

“I’m having a very interesting week so far,” said Nitty, a reference to his arrest on the Hoan Bridge.

A Middlebury Center on Terrorism, Extremism and Counterterrorism article explores the boojahideen connection to white supremacy and a push to be considered anti-racist and align with the George Floyd protests.

When the marchers set off Thursday Nitty said that it was important, if anything happened to him, for the group not to riot and to continue marching for justice.

Nitty and Coleman’s march stopped frequently for speeches and rallying chants, there was one particular speech that stole the show.

Amerah, a seven-year-old from Milwaukee, delivered an impassioned plea for equality for all while her mother and hundreds of others looked on, many holding up cell phone cameras to capture the moment.

Rafael Mercado rallied the group by telling them that the marches prove Milwaukee isn’t the most segregated city in the country. Each march was made up of a racially-diverse group.

That message was probably best represented when Nitty, a black man with dreadlocks, stopped to dance with Mary Kemnitz, a white woman with curly gray hair, to a song by rapper Tupac.

Kemnitz, a nurse who remembers watching the fair housing marches in 1967 and 1968, told Urban Milwaukee she wanted to be on the right side of justice and has attended multiple marches this week. She also feels being in a crowd during the pandemic is safe for her, she’s already had COVID-19.

There weren’t any speeches by politicians at Nitty’s march, but there were plenty that showed up along the way. Assembly Representatives Jonathan Brostoff and Robyn Vining both walked with the group for portions of the route, as did Alderman Nik Kovac, Senator Lena Taylor and later Milwaukee County Executive David Crowley.

What’s planned for tomorrow? “I don’t know what’s going on tomorrow, this shit is like Where’s Waldo,” said Mayes in his live stream Thursday.

Both Nitty and Mayes expressed joy about how smooth things went Thursday.

“It’s been beautiful,” said Nitty to Mayes about the behavior of the group. At one point Nitty was spotted giving a fist bump to a Milwaukee Police Department officer blocking off oncoming traffic from entering Center Street. 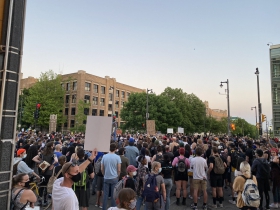 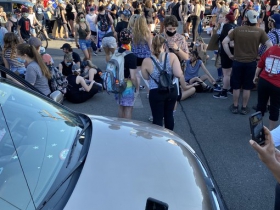 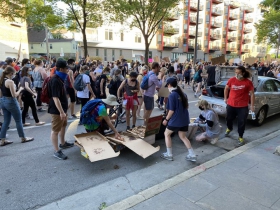 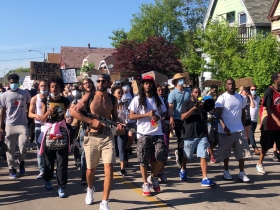 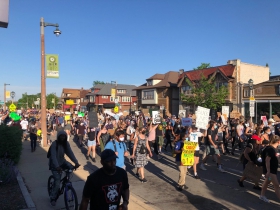 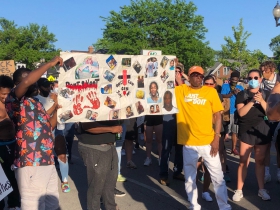 While the protest marches have had explicit calls to not engage in vandalism or looting, incidences of such activities have taken place across the city, often far away from the marches.

Milwaukee Police Chief Alfonso Morales has admitted much of the activity is caused by Milwaukee residents that would be engaged in criminal activity regardless of the circumstance. “Those are our local problem people, if there was no reason to loot and riot they would still be involved in criminal activity,” he told John Mercure Tuesday.

The Milwaukee Police Department released an almost four-minute-long video showing some of the incidences. The video also includes interactions between the protest marches and the police, including the 6th and McKinley incident that officials are calling for review of.

It also includes a photo of the dog that Morales said was killed by a trailing member of a car caravan behind one of the marches.

Urban Milwaukee has witnessed the organized marches be self-policing.

For more videos and photos from the marches, see each of their Twitter threads (Wauwatosa, Downtown).