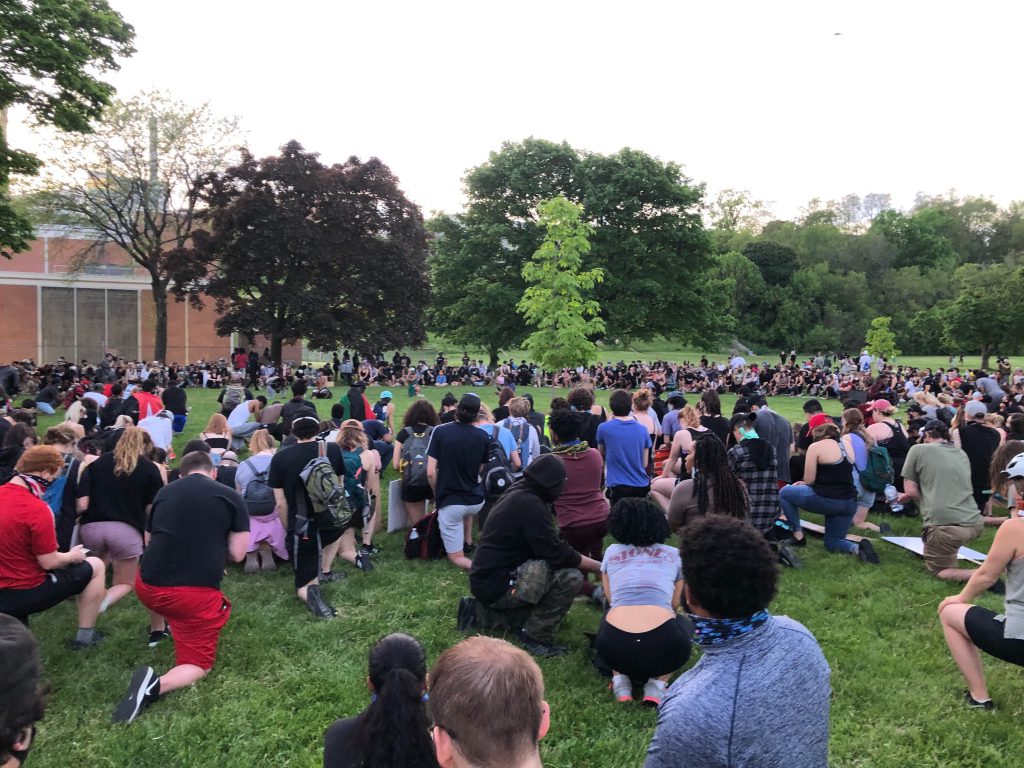 Milwaukee’s response to the death of George Floyd at the hands of a Minneapolis police officer continued its evolution Wednesday.

One large protest became many, at least five individuals appearing at an evening march openly carried rifles and the Common Council announced a special meeting for Friday afternoon to review the use of a curfew and other policing-related issues.

Urban Milwaukee followed two south-side marches, a circular one hosted by the Islamic Society of Milwaukee that stayed on the sidewalk and a large one from Humboldt Park led by Tommy Franecki that went north towards Downtown, and a north-side march that started in Gordon Park in Riverwest led by Frank Nitty and Khalil Coleman.

The marches came after a particularly conflict-ridden day when Nitty led a group onto Interstate 794 on a return trip to Bay View. He was arrested after being tackled by Milwaukee County Sheriff‘s deputies. Less than two hours later, the Milwaukee Police Department deployed tear gas and rubber bullets on protesters near Fiserv Forum in an incident that appeared to be escalated by police when an officer fell off his bicycle.

The incidents will be discussed as part of a broader review of the use of a curfew, its enforcement and the Milwaukee Police Department’s operational definition of the phrase “civil unrest” during a special meeting on Friday at 2:30 p.m. Individuals with public comments on the matter are encouraged to email the City Clerk.

Wednesday’s marches, by the time Urban Milwaukee left the scene of the last active one just before midnight, did not result in tear gas or rubber bullets from the police. Nor was there a curfew for the second straight night.

By the time evening fell the Humboldt Park and Gordon Park marches had merged and a group was walking down N. Lincoln Memorial Dr. on the lakefront before heading up the bluff and west on E. North Ave.

When the group, led by Nitty, got to the top of the hill near N. Prospect Ave. white individuals openly carrying rifles were spotted.

Were they part of a group led by Troy Allen that was expected to appear at Humboldt Park earlier in the evening? No, said Allen on Facebook. Urban Milwaukee didn’t find the group at the south-side park, but Allen later posted a photo of the group handing out water on the East Side near the march, sans any visible weapons.

So who were the people carrying the rifles? One wore a flag of the “boojahideen,” a slang reference to warriors believing in boogaloo, an armed revolution to overthrow the government. Allen had earlier said he was part of the warrior group, but in a social media post Wednesday night said he wasn’t with those specific people. A Middlebury Center on Terrorism, Extremism and Counterterrorism article explores the boojahideen connection to white supremacy and a push to be considered anti-racist and align with the George Floyd protests.

Did the group harass Nitty and activist Vaun Mayes? “Not necessarily,” said Mayes in a message to Urban Milwaukee.

Mayes filmed much of the latter portion of the march, including his approaching them outside Von Trier.

“Y’all wouldn’t even be down here if you didn’t have that shit,” Mayes can be heard saying to a group of five individuals, all of which are openly-carrying long rifles. “Just know we are watching you all man.”

“We gotta watch to make sure they don’t run up on me and shoot me,” said Nitty as the group moved further west into Riverwest.

Shortly thereafter the group appears behind the three leaders, with one saying “we’re here for you” and another hugging Nitty. The march leader huddles with them, with no audible audio of the conversation.

“We’re not with Antifa, f*ck that,” said one of the rifle-carriers when asked of their affiliations. President Donald Trump, as well as some officials and activists in other cities have placed the blamed for vandalism and looting on the anti-fascist protest movement. But according to the Washington Field Office of the FBI, it “has no intelligence indicating Antifa involvement/presence” in the violence that happened in D.C. on May 31st.

The rifle carriers departed as the march turned north on N. Martin Luther King Jr. Dr. and moved toward the police department’s district five station on W. Locust St. that was protected by the Wisconsin National Guard.

Coleman, in a speech watched by Urban Milwaukee in N. Holton St., and encouraged marchers to be peaceful on King Drive. “If you want to f*ck up some stuff, leave the protest and do it on your own time,” he said. “Please don’t f*ck King Drive.”

Nitty and others left the march after standing outside the police station. And multiple sources credit Reggie Moore, director of the city’s Office of Violence Prevention, with de-escalating tension with remaining marchers. Moore has been spotted on the edge of the march multiple times by Urban Milwaukee in the past week.

The remaining marchers, a quickly dwindling crowd, ultimately went north, as did the blocks-long line of cars following them. Urban Milwaukee observed numerous instances of dangerous reckless driving, and one case of an open intoxicant, in the car caravan which stretched for blocks behind the marchers.

At multiple points later in the night, pedestrians, including this reporter, had to clear the sidewalk for a passing car. While driving to find the group at one point, I needed to quickly pull over to get out of the way of a high-speed, wrong-way driver coming away from the crowd.

Urban Milwaukee did meet the group again on W. Keefe Ave. and observed the marchers efficiently part to let an ambulance through and also force the trailing car caravan to move out of the way.

A video shared on Twitter by user ElGuapoGrande shows reckless driving in Gordon Park near the intersection of N. Humboldt Blvd. and W. Locust St. in Riverwest at approximately 1 a.m., an hour after Urban Milwaukee left the event. No mass of marchers can be seen, nor can any signs.

Graham Kilmer contributed to this report.