Artists painted a mural Thursday on a building at the corner of N. Holton St. and W. North Ave. to memorialize George Floyd and other victims of police killings, including Milwaukee’s Dontre Hamilton.

Like so many responses to Floyd’s killing by a Minneapolis police officer, the mural was a community effort and it happened quickly.

Ihsan Atta, owner of the small building at 2308 N. Holton St. used for the mural, announced on a Riverwest neighborhood Facebook page early this week that he would like a mural on the building, and that he wanted local artists to collaborate on it. Two days later, there was paint on the walls.

“I wanted different artists to collaborate, different ethnicities and races to come together,” he said.

Atta told Urban Milwaukee that seeing the images of police brutality in Milwaukee and around the country has been deeply affecting for him. “It’s all too familiar for me as a Palestinian, because the tactics that we’re used against George Floyd are what the illegal Israeli occupation uses against the Palestinians every day.”

The community came together to make the memorial, and that’s exactly what Atta wanted. “People need to educate themselves and need to get out of their comfort zone and become friends or befriend people of color.”

Chris Burke, a tattoo artist at Ghost Light Tattoo helped bring together all the artists that worked on the mural, Atta said. One of them was Dom Whitehurst, a visual artist who knows Burke through the art and tattoo community.

The mural also prominently features a depiction of Dontre Hamilton. A Milwaukee man that was killed after being shot 14 times by a Milwaukee Police Officer in Red Arrow Park in 2014.

Despite the painful subject of the mural, Whitehurst said that making the memorial, “you feel, like a form of release, you already expressing yourself.” He felt the mural shows “that you can be optimistic in times of darkness, disparity.”

He hopes those who pass by it will take from it a sense of strength, that they will “have faith in themselves and believe that we can change the system.” 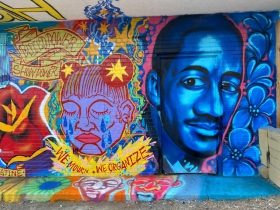 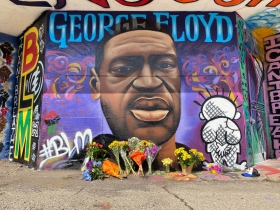 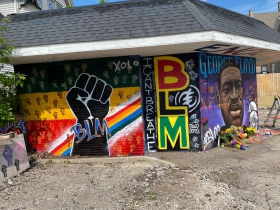 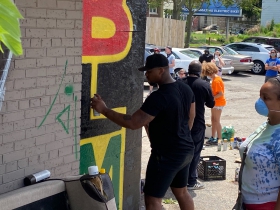 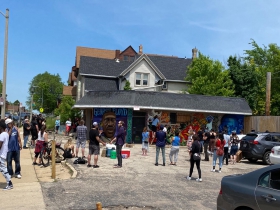 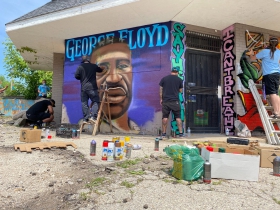