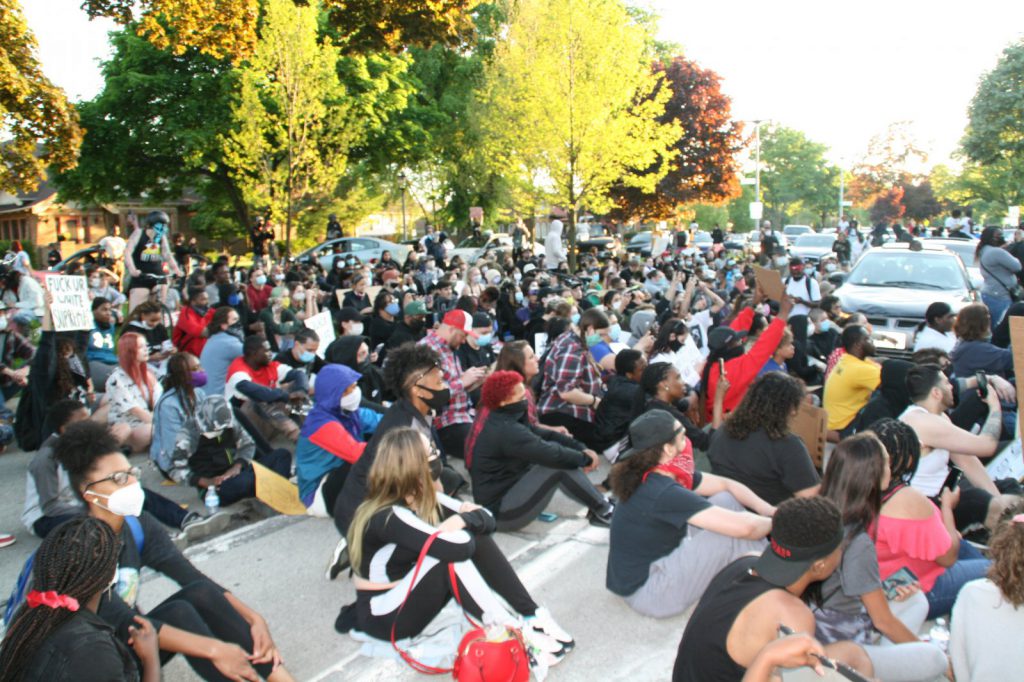 On May 30th, protesters sat in the street in front of Mayor Barrett’s home listening to speeches. Photo by Jeramey Jannene.

In the midst of a pandemic disproportionately ravaging communities of color, at the tail end of a tumultuous weekend of civil unrest, and on the 99th anniversary of one of our nation’s darkest tragedies, Milwaukee Mayor Tom Barrett, a Democrat, stepped up to a podium to address his city.

During his speech, Barrett reiterated his condemnation of the former Minneapolis police officer who took the life of George Floyd on Memorial Day. Of the video depicting the murder, Barrett said the following:

“I don’t know that there can be a human being in this country who cannot look at that video and not be angry at what they saw, that’s how disturbing it was.”

You don’t know that there can be anyone in this country that watched that video and was not angry? You don’t have a cousin who is willing to say out loud, “That’s what they deserve”? You don’t have an aunt who will only tell her friends, “He must have done something to deserve it”? You don’t have a niece who won’t admit it, but has no problem with how the police treat the George Floyds of the world, because the flip side is preferential treatment for herself?

Well, if that’s the case, then your family get togethers must be so peaceful and loving. I’m jealous.
No. I’m not jealous. I’m incredulous, because that is nonsense. Even if your family is a picture of progressive, empathetic harmony, you know that there are people who were not angry when they saw that video. You know that there are people who took pleasure and comfort in that video. It is time to stop ignoring it.

Mayor Barrett, you are old enough to remember the March on Milwaukee protests that began in the summer of 1967. Just as brave, righteous citizens marched against police brutality this past weekend in Milwaukee, they did a half century ago in the name of fair housing. They marched for 200 consecutive nights. Unlike today, those marchers were met by mobs of racist white Milwaukeeans, many of whom were children your age, who are now adults.

In a perfect world, those kids, in time, would have seen the error of their ways. They would have learned to love their fellow citizens. But in our American reality, many of them continued to hate and passed their prejudice onto their children.

Because no one is born racist. It is a learned behavior. In America, it has been learned by individuals and institutions. It is embedded in the fabric of our nation. It had to be. It is the only mental trick that could justify slavery.

In the last week, there’s been much talk and anger over looting. Well, if you think looting is bad, then you should be mad about what Europe did to Africa to build America. In that case, it wasn’t shoes, designer jeans, or bottles of alcohol. It was human beings, torn from their native land, forced to build this country.

The looting of Africa was obviously bad, monumentally bad, catastrophically, historically, horrifyingly abhorrent. Equally as bad is everything this country has done (and continues to do) in its attempt to justify that looting. This centers around our particular brand of racism; predicated on the dehumanization of Black people and expanded to oppress other non-white people.

Mayor Barrett, this former Minneapolis police officer is not the only person in America who has learned all of this. That he has been arrested and charged is a step in the right direction, but it is not enough.

If the breadth of our nation’s history has taught law enforcement that they can kill Black people with immunity, unlearning that behavior will take a lot more than the arrest and conviction of this one officer. For starters, it will require that his three accomplices, those who aided and stood by as he murdered George Floyd, be arrested, tried, and convicted. In the long term, it will require massive reform and changes to federal law.

It will also require that you and your fellow political leaders acknowledge and admonish the persistence of racism, for it is all around us. It is not only in our police forces, but it is in our courtrooms, in our schools, in our media, in every corner of our communities, even in ourselves. No one is immune to prejudice.

To be genuinely anti-racist, you must admit and address your own prejudice before you can attempt to affect change in the world.

By embracing, electing, and standing by a president who built his political career on a racist campaign to discredit our nation’s first Black president, Republicans have made it clear that they are not willing to do this work.

The task falls squarely on those who call themselves Democrats and those who vote for Democrats. If this work is not taken up with sincerity and determination, if it is simply paid lip service, my generation and those younger than me will turn our backs on the Democratic Party. The cracks are already starting to show.

Sunday was the 99th anniversary of the Tulsa Massacre. It is one of the darkest moments in our nation’s history, yet it is widely unknown.

On May 31, 1921, mobs of white citizens attacked and destroyed Tulsa’s affluent Greenwood District, then known as “Black Wall Street”, for no reason other than the fact that its residents were Black and successful in America. More than 1,000 businesses and homes were burned, while 300 Black people were killed.

This hideous chapter in American history was covered up for decades. Why do you think that is? Maybe because overlooking, ignoring, and denying racism in America is just as common as instituting it? Maybe because they work in tandem?

It is time we dismantle this racist system. To begin, we as a city, as a state, as a nation, and as a global community, must no longer ignore it.