The new brewery opened after the economic shutdown and is offering beer-to-go. 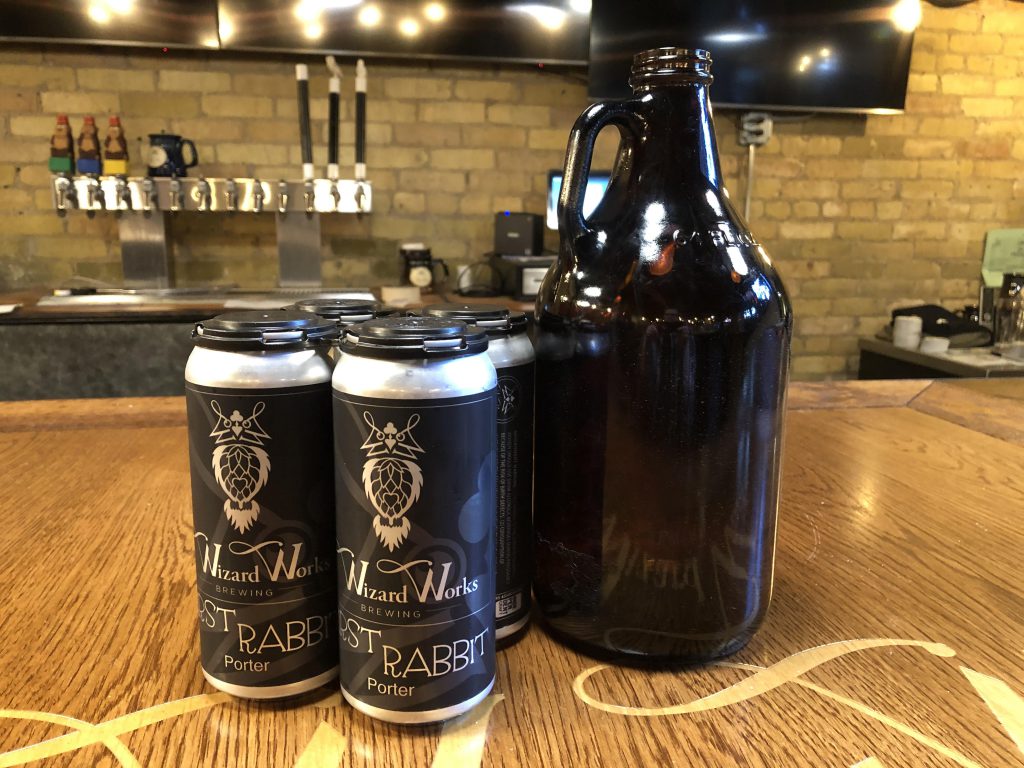 “We were supposed to have our grand opening, but I suppose it is kind of just opening yourself up to the universe by saying ‘Hey, we’re opening on April Fool’s Day,” Jennifer Higgins said with a chuckle.

Higgins and her husband of 14 years, Chris Ragaisis, had plans to open their magic-inspired brewery, Wizard Works Brewing, on April 1st in the space previously occupied by Broken Bat Brewing at 231 E. Buffalo St. But due to COVID-19-related shutdowns and the stay-at-home order, the couple had to postpone their grand opening celebration. However, the brewery has still opened for business, selling exclusively to-go cans and growlers of its beer.

“Originally, we weren’t really going to be set up for beer to-go, so we had to work on getting the supplies for that,” Higgins said. “It’s been a bombardment of kind of just getting into a groove and knowing that that groove is going to completely change.”

Thanks to some help from Broken Bat Brewing and its canning line, the previous tenants of the space, Wizard Works Brewing was able to produce an initial run of canned four-packs of beer. For now, without a canning line of its own, the supply of canned beer is limited. The brewery hopes to bring back canned beer in the future, but is working out the details of a timeline and a contract for a canning line.

“We’re trying to figure out how long we’ll be in this new model of business,” Higgins said.

The brewery is also filling up growlers of its six beers currently on tap. Customers can bring their own growler to fill, or purchase one when they stop in. A porter called First Rabbit, clocking in at 5.5% ABV and 40 IBU, was the first beer that Higgins and Ragaisis brewed under the Wizard Works name.

“It’s got such a fantastic balance where you hit the coffee notes without it tasting like a coffee beer,” Higgins said. “There’s the subtle hint of the darker malt and having those flavors blend and leave — it’s like the sweetness comes in and the bitterness emerges and they hang out for a bit.”

The brewery’s latest concoction is called Abracadabra — an American IPA that sits at 7.2% ABV and 53 IBU — and Higgins is very proud of how it turned out.

“It’s got a full hop flavor but it doesn’t have a bite,” Higgins said. “The balance on it is really nice — we took the recipe from a traditional British-style IPA and adjusted the hops.”

There’s more to the magic at Wizard Works Brewing than just clever beer names and vintage posters on the wall. Visit the brewery’s Facebook page and you can watch videos of Ragaisis performing magic tricks. In one such video, he uses a card trick to explain why social distancing during the pandemic is so important. When the brewery fully opens for business, Ragaisis plans on doing live magic performances at least once a week. Higgins also said that a simple inquiry while Ragaisis is behind the bar will be rewarded with one of his hundreds of tricks.

Not only is magic on the menu at Wizard Works Brewing, but it’s also a fundamental part of the brewery’s history. Higgins and Ragaisis met while working at the Bristol Rennaissance Faire — she was playing Queen Elizabeth, and he was performing as a magician. At the time, she was a beer enthusiast and Ragaisis had a passion for home brewing.

“It was always kind of his dream to have his own place someday where he could perform magic and brew beer and share stories and build community,” Higgins said. “There’s just something so welcoming about a taproom.”

Their shared dream of opening a brewery started to become a reality after they participated in the Barley to Barrel Brewery Incubator Program, which prepared the couple for the ins-and-outs of operating a brewery, but couldn’t possibly have prepared them for opening during a pandemic. Thanks to a successful Kickstarter campaign and to-go beer sales, the brewery has been able to stay afloat. They remain hopeful and will continue to spread the word about the brewery, create new beer and fill up growlers until the public can safely gather to experience the magic in person.

“The opportunity to be a part of the Milwaukee beer scene is really special for me because Chris is from here and I grew up here,” Higgins said. “We’ve got such good company and such diverse and fantastic beer that we’re really happy to be part of that family. We’re doing our best to hang on and be a part of how all of that continues forward.”

Currently, Wizard Works Brewing is open for to-go beer and growler fill-ups on Saturdays and Sundays from noon to 4 p.m. Once it fully reopens, the brewery aims to be open from 4 to 10 p.m. Tuesday through Thursday; 2 to 10 p.m. Friday; noon to 10 p.m. Saturday; and noon to 6 p.m. Sunday.