Pre-leasing has now started for the building's first residents. 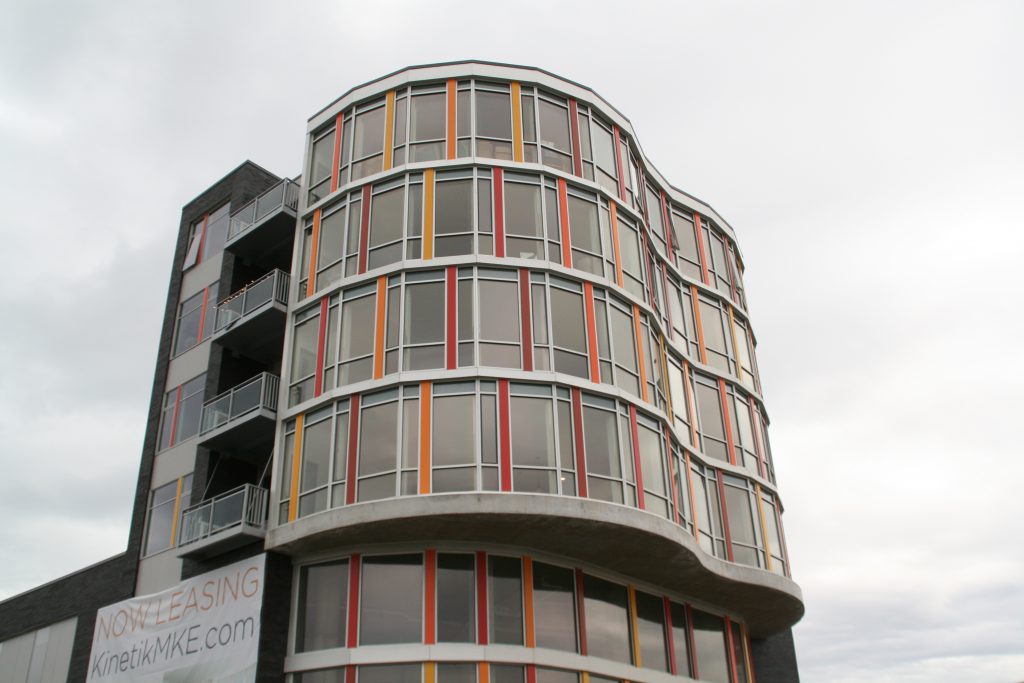 Bay View‘s new bookend will soon accept its first residents. The construction fences are down and the leasing signage has gone up.

The complex will be home to apartments on its top four floors while the lower level houses a food hall known as Flour and Feed, planned to open post-pandemic. The second floor and a portion of the first floor furthest from S. Kinnickinnic Ave. will be used for parking.

The $25 million New Land Enterprises project is being designed by Korb + Associates Architects with Catalyst Construction serving as the general contractor. The principals of the firms know each other well at this point: they’re also working to finish the Quartet apartment building in Walker’s Point and planning two mass timbers projects Downtown.

Located at 2130 S. Kinnickinnic Ave., Kinetik sits on a 1.29-acre lot that connects a quickly changing area. Less than a quarter mile north of the property sits the southern tip of a nearly 60-acre site Komatsu is developing into a new, $285 million manufacturing campus. Just a block west is Wheel & Sprocket’s new headquarters. And a couple blocks further west is the site of Michels Corp.‘s $100 million River One development, where the structural steel for the project’s signature eight-story office building can now be spotted. Along S. 1st St. Wangard Partners is planning a large apartment complex between the two nine-figure developments. To the south an ever-changing array of businesses fill the many commercial storefronts along Bay View’s main street.

Information on leasing is available on the New Land website, including floor plans ranging from a 540-square-foot studio that uses the firm’s now-signature space saving design to a 1,372-square-feet, two-bedroom apartment located in the building’s curved northern end. You can also take a 3D walkthrough of various units.

Zillman Park, a 0.7-acre, city-owned park located at the southern edge of Kinetik, will also receive an overhaul as part of the development.

The city has created a tax-incremental financing district to harvest $500,000 in incremental property tax revenue to pay for improvements to the park. Included in that plan is new playground equipment as part of the city’s MKE Plays initiative. The park today has a sculpture, Bublr Bikes station, benches and trees.

Three of the 62 parks owned by the city are within a quarter mile of one another in Bay View. The city envisions removing the playground equipment at nearby Allis Street Park (2156 S. Allis St.) as part of the Zillman Park improvements. The equipment, installed in 1994, has been deemed “obsolete.” A basketball court on E. Bay St. near E. Lincoln Ave. would be left as is.

“Our thought was instead of diluting that money across three parks we would put substantial money into Zillman and make that a really good place for the community, ” said MKE Plays director Joe Kaltenberg at an August community meeting. For more on the park plan, see our September coverage.

New Land has rebuilt E. Archer Ave. a former alley-like street that connects the park and building, into a pedestrian plaza. The food hall will overlook the park and utilize the plaza.

New Land created the development site through its affiliate Hamburger Lofts LLC by purchasing a number of parcels. The core of the site, a 0.8-acre lot at 2130 S. Kinnickinnic Ave., was most recently occupied by a Hamburger Mary’s restaurant. New Land acquired it for $1.25 million in 2017. The now-deconstructed building on the site was built for Burger King in 1985, but later housed an Omega restaurant.

Three homes along the alley-like Archer Ave. were deconstructed, and the site of one will be used to construct a new alley for the street, connecting it with E. Bay St.

The city granted a zoning change for the project in 2017, and approved the vacating of Archer Ave. in 2018. It was the third such variance for the area in recent years, with the nearby Stitchweld and Vue apartments also requiring zoning changes.

The Kinetik’s two-floor concrete base will hold 183 parking stalls, commercial space and building amenities. In addition to the food hall, planned to be bigger than the firm’s Crossroads Collective food hall on the East Side, commercial space remains available for lease in the building.

Want to see how things have changed? See our coverage from August of the project. 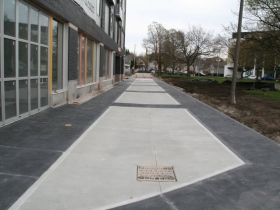 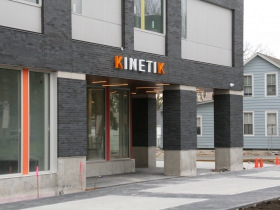 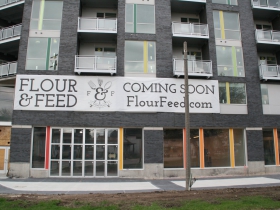 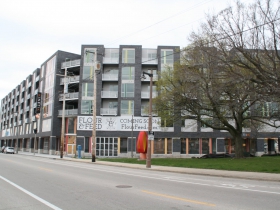 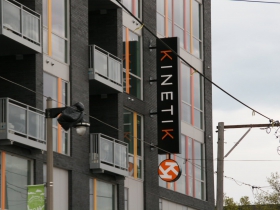 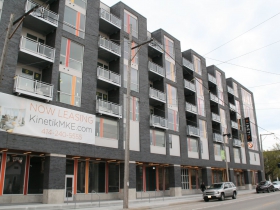