A Food Hall for Bay View 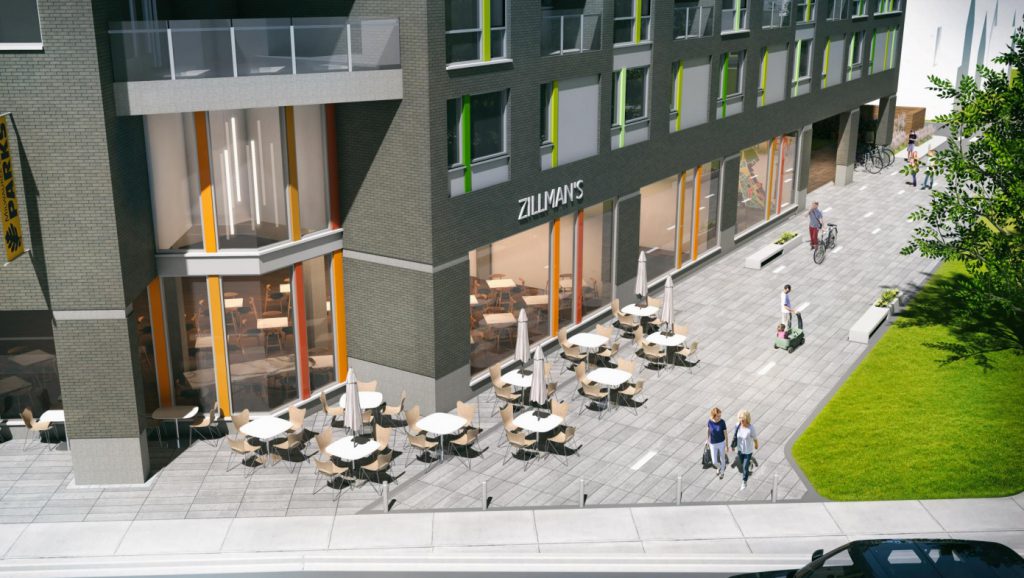 The planned plaza on Archer Ave. Flour and Food will occupy the space labeled “Zillman’s.” Rendering by Korb + Associates Architects.

A new apartment building under construction on the north end of Bay View is going to have a marquee anchor tenant.

New Land Enterprises will open “Flour and Feed” food hall and market on the first floor of the six-story, 144-unit KinetiK apartment building the firm is building at the southeast corner of S. Kinnickinnic Ave. and E. Bay St. The building is scheduled to open in 2020.

The food hall will occupy an 11,500-square-foot space overlooking Zillman Park, a much larger space than the firm’s first food hall, Crossroads Collective, at 2238 N. Farwell Ave. The East Side food hall has eight food vendors.

“We hit a sweet spot of how many vendors a food hall should have,” said New Land director Tim Gokhman in an interview. “So, what do you do with that extra space? We have been thinking about that for a long time.” The plan is to bring in a mix of non-food vendors, to which Gokhman quickly ticked off a list of possibilities including clothing vendors, local makers, arts and craft makers and an olive oil store.

The developer said he found inspiration for the model in the Chophouse Row food hall and market in downtown Seattle.

Flour and Feed will also include an approximately 1,150-square-foot shared space and small stage for live music, community events and cooking demonstrations. Gokhman said the intention is to create a gathering space for Bay View.

It will also include an outdoor plaza on the former E. Archer Ave. that connects the building to the park. The city is vacating a portion of the alley-like street to allow New Land to connect the new building with the park. New Land will rebuild the street, including heating the new plaza from underneath to allow year-round dining. “There really isn’t another space like this in Milwaukee,” said Gokhman.

A bar would also be included in the food hall.

The firm isn’t announcing any vendors yet, but Gokhman said his firm is being deliberate with its vendor selection. “KK already has a lot of great restaurants,” said the developer. “We don’t want to come in and compete with existing concepts.” 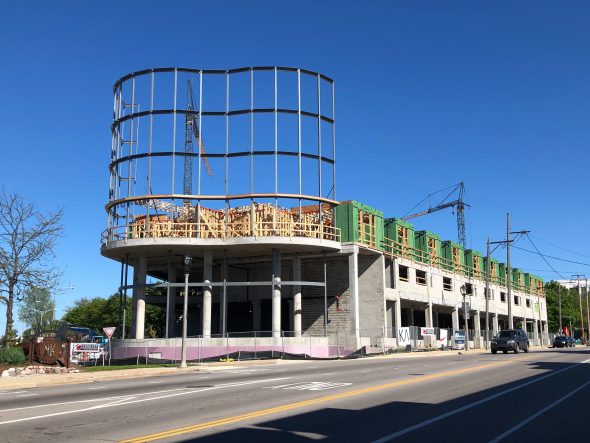 One thing you can be sure you won’t see: the site’s one-time occupant Burger King. Crossroads, which bills itself as “Milwaukee’s foodiest food hall,” contains a mix of existing local vendors, including the vegan-centric Beerline Cafe, and new concepts, like Raw Bar, from prominent area chefs.

Flour and Feed would be the fourth food hall to be planned in the city. The Sherman Phoenix and Crossroads Collective both opened in 2018. The 3rd Street Market Hall, curated by Omar Shaikh, is scheduled to open in 2020 in the former Shops of Grand Avenue mall. The Milwaukee Public Market also contains many elements of a food hall.

Partners at each food hall have repeatedly said the food halls aren’t engaged in zero-sum competition, with each targeting a different audience. Gokhman said his new food hall would serve not only Bay View residents, but new workers at the nearby Michels Corp.‘s River One development and Komatsu plant.

The “Flour and Feed” name is a reference to one of many historical uses for the site. A 1910 Sanborn Insurance map of the area shows a sizable store labeled “Flour & Feed” at what was then 882 S. Kinnickinnic Ave. Based on the map, the former footprint of that store will be the north end of the food hall.

Approximately 5,000 square feet of commercial space remains at the north end of the building. A letter of intent has been signed for that space, said Gokhman. 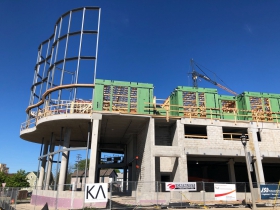 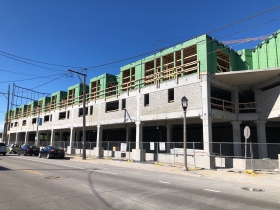 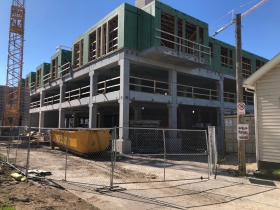 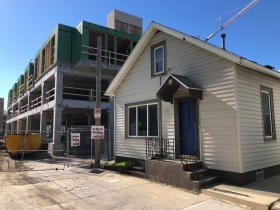 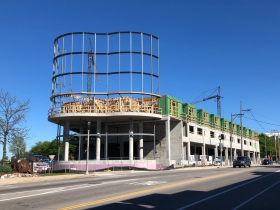 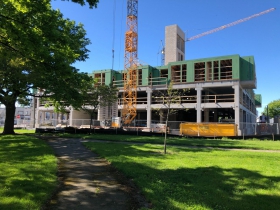 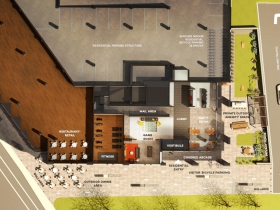 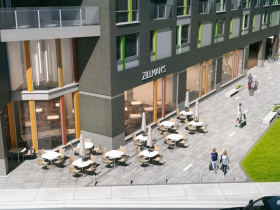 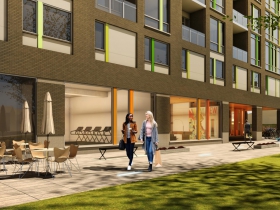 New Land, through its affiliate Hamburger Lofts LLC, purchased a number of parcels to create the site for KinetiK.

The core of the site, a 0.8-acre lot 2130 S. Kinnickinnic Ave., was most recently occupied by Hamburger Mary’s restaurant. New Land acquired it for $1.25 million in 2017. The now-deconstructed building on the site was built for Burger King in 1985, but later housed an Omega restaurant. Two houses were demolished to form the southern portion of the site.

Along S. Kinnickinnic Ave. and its narrow sidewalks an arcade design will be incorporated into the building’s first level. The end product is intended to create an expanded, covered sidewalk by stepping back the first floor underneath the apartments above.

The city granted a zoning change for the project in 2017.

Korb is also working with New Land on a number of projects, including a mass timber office building in Westown and the tallest wood tower in North America in East Town.