Milwaukee could be home to tallest wood building in Western Hemisphere by 2021. 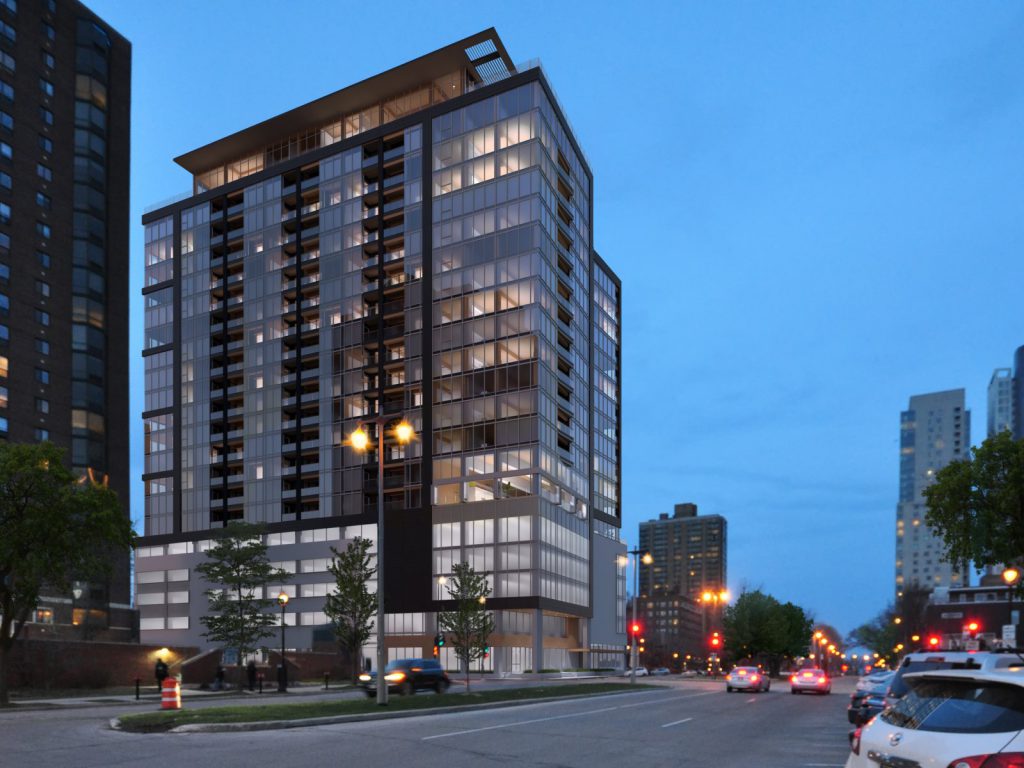 The Milwaukee Common Council unanimously approved the design of a 21-story tower Tuesday morning. And while a new tower is enough to merit significant news in Milwaukee, the real story is what the building would be made of. The apartment tower would be the tallest wood building in the Western Hemisphere.

New Land Enterprises is planning to build Ascent, a 21-story tower with 201 apartments, on a long-vacant site at the northeast corner of N. Van Buren St. and E. Kilbourn Ave. The tower would be largely built of a man-made lumber product that is designed to be environmentally friendly and more attractive than steel or concrete. “The goal of the glazing in large part is to expose that material,” said architect Jason Korb of the tower’s many windows.

New Land, led by director Tim Gokhman, hopes to begin construction this fall. Should it proceed on schedule, construction would take 17 months according to Gokhman. The building could open as early as 2021.

Mass timber is an engineered product made by combining layers of lumber into a stronger material. The material is capable of building much taller buildings than conventional wood construction methods because it only chars (rather than burning through) in a fire and offers enhanced strength. “The entire wood structure, and this would never happen, could burn down and the cores would be left standing,” said Korb in January. He compared it to Trinity Church, which even after a devasting fire in 2018 still had its old-growth lumber trusses standing.

The engineered material offers substantial environmental benefits over steel or concrete. Because of its reduced weight, it also can reduce the size of a building’s foundation allowing faster construction. Construction speed is further enhanced with the use of prefabricated components. “It can go up incredibly quickly. We estimate the 16 floors will go up in four months,” said the architect at a prior hearing. New Land and Korb + Associates Architects are working with engineering firm Thornton Tomasetti on the building’s structure.

But while the Common Council has now approved a zoning change to accommodate the design and size of the building, the final mass timber product selection must still be approved by the Department of Neighborhood Services. In January Korb said productive meetings have been held with the Department of Neighborhood Services and Milwaukee Fire Department.  “Our commitment was that probably mid-March we would meet with them again. We offered several safety upgrades that they appreciated,” said the architect.

It isn’t the only mass timber building planned for Milwaukee. New Land released plans in July to build a seven-story mass timber office building, the city’s first, along the Milwaukee River in Westown.

The apartment tower would be taller than an 18-story, 174-foot-tall mass timber building in Canada. A larger, but not taller, mass timber, two-building complex is planned for Cleveland.

The 238-foot-tall tower would be 10-to-12 feet taller than the conventionally-built Yankee Hill apartment tower located across N. Van Buren St. according to Korb.

For more on the tower, see our coverage from earlier this month.