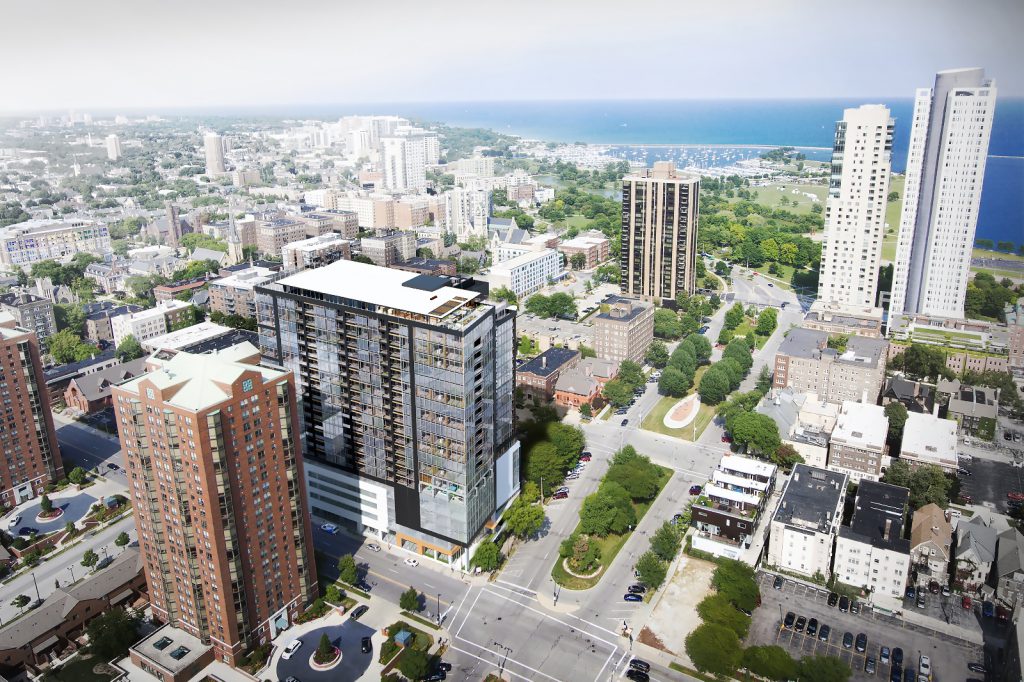 A proposal to build the tallest mass timber building in North America has received its first design approval.

New Land Enterprises is planning to build Ascent, a 21-story apartment tower, on a long-vacant site at the northeast corner of N. Van Buren St. and E. Kilbourn Ave. The tower would be largely built of a man-made lumber product that is designed to be environmentally friendly and more attractive than steel or concrete.

The City Plan Commission unanimously recommended the proposal for approval on Tuesday. The project will next go before the Common Council’s Zoning, Neighborhoods & Development Committee.

Project architect Jason Korb, who has done a brisk business designing buildings for New Land in recent years, walked the commission through the plans. The base of the building, including four floors of parking, will be built from traditional concrete, while the 15 apartment floors and top-level amenity floor will be built from mass timber. The combined portions would rise 238 feet.

“The aesthetic is unmatched in our opinion,” said Korb. Wherever possible the timber would be left exposed.

New Land, led by director Tim Gokhman, hopes to begin construction on the building this year. Korb told the commission that rents would be in excess of $2 per square feet, placing it in line with other new high-end apartment buildings.

Mass timber is an engineered product made by combining layers of lumber into a stronger material. The material is capable of building much taller buildings than conventional wood construction methods because it only chars (rather than burning up) in a fire and offers enhanced strength. “The entire wood structure, and this would never happen, could burn down and the cores would be left standing,” said Korb. He compared it to Trinity Church, which even after a devasting fire in 2018 still had its old-growth lumber trusses standing.

The engineered material offers substantial environmental benefits over steel or concrete. Because of its reduced weight, it also can reduce the size of a building’s foundation allowing faster construction. Construction speed is further enhanced with the use of prefabricated components. “It can go up incredibly quickly. We estimate the 16 floors will go up in four months,” said the architect.

Korb said productive meetings have been held with the Department of Neighborhood Services and Milwaukee Fire Department.  “Our commitment was that probably mid-March we would meet with them again. We offered several safety upgrades that they appreciated,” said the architect. New Land and Korb + Associates Architects are working with engineering firm Thornton Tomasetti on the building’s structure.

Additional environmentally-friendly features could be coming. “Did you think about doing a green roof as part of it?” asked Commissioner Whitney Gould. “We haven’t gotten to that level of detail yet, but I think the opportunities are there, same with frankly, solar,” said Gokhman.

A pool is planned for the sixth floor with operable windows. A sauna, steam room and entertainment center are also planned for what the firm is calling a “wellness floor.” The top floor would be a resident amenity level with two outdoor decks, fire pits, grilling stations, a clubhouse, kitchen and co-working space. Every unit has a recessed balcony.

The units would be a mix of one-, two- and three-bedroom floor plans. “While we continue to see a demand for one-bedroom apartments, we also see a significant undersupply of larger floor plans that can accommodate empty nesters, professionals and families,” said Gokhman when the project was announced in October.

Commercial space is planned for the southwest corner of the site at 700 E. Kilbourn Ave.

New Land released plans in July to build a seven-story mass timber office building, the city’s first, along the Milwaukee River in Westown.

It’s not the first time New Land has sought to build a tower on the site. The firm had plans for a 19-story tower known as Bookends North on the site in 2009. That project eventually died when the firm was unable to secure financing.

In 2014, Chicago-based developer Carroll Properties unveiled plans for a 35-story apartment tower on the site. That project received a zoning variance from the city, but never was built.

The tallest completed timber tower is Brock Commons, an 18-story, 174-foot-tall student housing complex at the University of British Columbia in Vancouver, Canada. But Canada won’t hold the distinction for long.

In the coming months, the Mjos Tower will open in Norway. The 280-foot-tower contains a mix of housing, office space and a hotel. A 276-foot tower is nearing completion in Vienna, Austria as well.

One thought on “Eyes on Milwaukee: Tallest Timber Tower Gets First Approval”